I know that I should use the equations:

Where if I plot $x^2$ against $t,$ I can calculate the viscosity from the slope $\displaystyle\frac{2kT}{6πηa}.$ However, what I don't understand is how to calculate $x^2.$

The basic idea here is that the spherical particles, each of radius a, are being bounced around via Brownian motion. So the two relevant equations are

Note that the first equation uses r(t) rather than x, to avoid needless confusion with the x and y cartesian coordinates of the spherical particles.

Now consider particle 1. At t = 0 s, it is at the defined location 0,0, where all distances are in $\mu m$. At four subsequent times, the x and y coordinates are as given in the OP's table. The following figure shows particle 1's location at t = 0s and at t = 30 s. 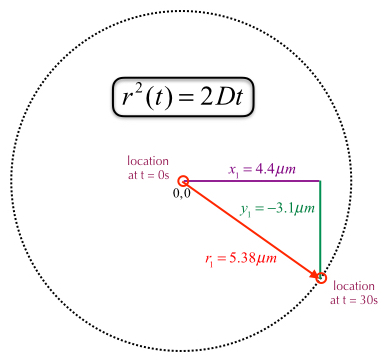 At any given time,

To estimate D, an ordinary least squares fit is performed on the tabulated data for particle 1. The result is shown in the next figure: 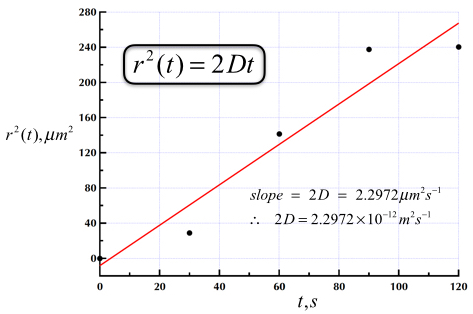 Not the answer you're looking for? Browse other questions tagged physical-chemistry viscosity or ask your own question.

4
Viscosity of two different solutions
0
Calculating collision diameter with viscosity, but not having the mass given
8
What is the viscosity of menstruation blood?
3
ASTM D2270 Viscosity Index Formula/Table derivation
4
What is viscosity in terms of chemistry?
3
Why is the viscosity of water and ethanol lower than that of a water-ethanol mixture?
2
Viscosity at CMC