What change takes place in the denticity of this ligand if it is an inner-transition metal ion vs a common transition metal? Primarily, why does the ligand behaves differently with the two situations above.

I decided to do some more research for this question as I had faced it before. Turns out the proper name of this ligand is diethylenetriaminepentaacetate ($\ce{DTPA^5-}$). It's an expanded version of EDTA and is primarily used in MRI scanning where it forms complexes with the Gadolinium ion. It forms complexes with a coordination number of six and seven with transition metals simply because these complexes are more stable. Here's Fe(III)-DTPA as an example1:

Experimentally Fe(III)-DTPA has been observed to adopt seven- and six-coordinate crystal structures. This agrees with our result where the 8-coordinate Fe(III)-DTPA is $\pu{23 kJ mol^-1}$ higher in energy relative to the most stable 7-coordinate structure 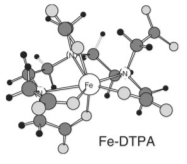 With inner transition metals, it forms complexes with a denticity of 8, with Pr-DTPA being an example2: 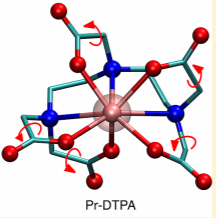 7
Why does Co2+ have 7 electrons in the 3d orbital, and not 5 like Mn?
1
Are all complexes with a polydentate ligand examples of chelation?
8
Why do transition metals form particularly stable complexes?
3
Why or why not can hydroquinone and 2H-pyrrole act as ligands?