Why should the scalar product of the components along two axes remain unchanged after transformation?

A couple of proofs from Chapter 2 of "Space Groups for Solid State Scientists" are giving me a hard time (see attached image). 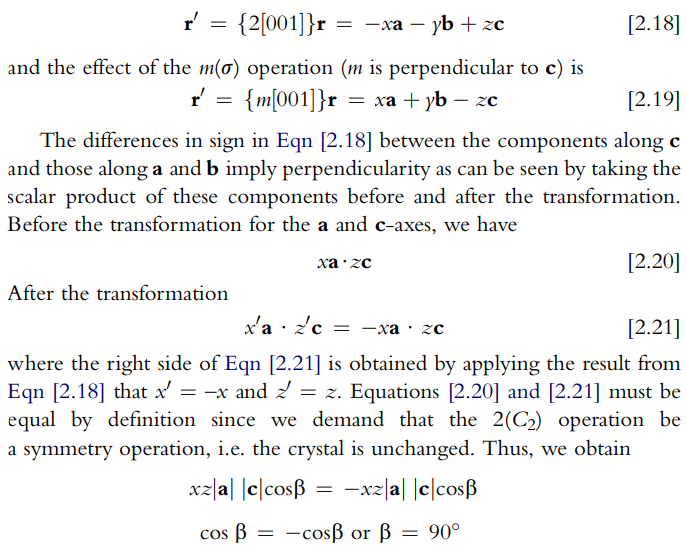 So why should the two dot products be equal? And how should one interpret this dot product intuitively (component of one axis onto another?) ? (I can kind of visualize how the mirror image of a triclinic lattice wouldn't coincide with the original if one of the axes is not perpendicular to the other two, but how should one prove it rigorously, and how does the aforementioned proof work)

The scalar product depends on the length of the vectors and the angle between them. Rotations, translations and mirror operations do not change distances or angles (i.e. don't distort objects), so the scalar product is unchanged as well. There are other operations that do (stretching, warping, etc).

Without knowing the context, the proof seems wrong. Equation [2.18] is not general and only works for orthogonal coordinate systems. To give a simple example: if the b axis is not perpendicular to the c axis, and we rotate on a twofold along c, the b axis will not be transformed into -b, but rather into a linear combination of b and c. What this proof shows is that if axes are orthogonal, they are orthogonal (tautology).

What is true is that if there is a two-fold axis along c, you can always choose the two other axes such that they are orthogonal to c. This is a choice, however, and other choices are possible. 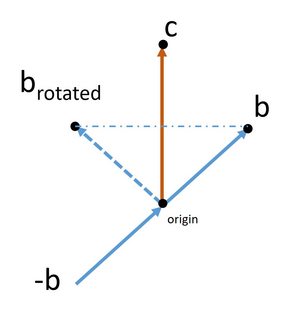 In the figure, b and c are not perpendicular. Points at the origin, at the tip of b and the tip of c are equivalent by translation. If there is a crystallographic twofold rotation along c, there is another equivalent point at the tip of the rotated b. The rotated b is not the same as negative b, as the figure illustrates by counter-example. However, if you want perpendicular axes (and that is the choice recommended by the international tables), you can switch from the axis b to the thin line (shown as dot-dash-dot-dash), giving you a new axis perpendicular to c. In the case shown, the lattice is now face centered.

Not the answer you're looking for? Browse other questions tagged symmetry crystallography or ask your own question.

4
For two compounds that are symmetrical, why does the more compact one have a higher melting point?
5
Vibronic coupling: How do I determine the new point group after vibration?
6
Why does the 31P{1H} NMR spectrum of cis-[Mo(CO)2(dppe)2] show two signals?
4
Miller Indices and the case of a cubic crystal
5
How do the three Miller indices (hkl) denote planes orthogonal to the reciprocal lattice vector?