What is the mechanism of AChE inhibition by Onchidal?

A naturally-occuring neurotoxin, called Onchidal, produced by a species of sea slug acts as an irreversible inhibitor of acetylcholinesterase. The structure of Onchidal is presented below: 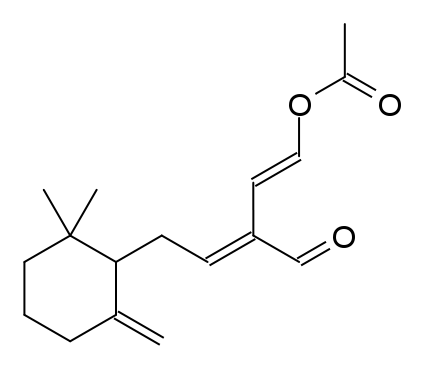 How and why does Onchidal act as an AChE inhibitor? What does the adduct of Onchidal with AChE look like? Why is the inhibition of AChE by Onchidal irreversible?

Q.1: How and why does Onchidal act as an AChE inhibitor?

Onchidal is an antipredatory, feeding deterrent product secreted by marine organisms such as Onchidella binneyi and Elysia cripata, not having the protection of an external shell and thus relying on the production of a defensive secretion. [Gavignin et al., 2000, 1996, 1997; Ireland et al. 1978] To mammals, it is a neurotoxin that acts as an irreversible inhibitor of AChE, with a Kd of 300 μM, where it forms a covalent species with the enzyme.[Abramson, 1989]

Q.2: What does the adduct of Onchidal with AChE look like?

This molecule was isolated from the mucus obtained by squeezing the mollusc O.binneyi. [Ireland et al. 1978] It is a sesquiterpene acetate containing an α/β-unsaturated aldehyde and an acetate ester as shown above. It has also been speculated that onchidal’s active form is believed to be ancistrodial.

(i) Schiff base formation with a lysine;

(ii) attack on the beta-unsaturated carbon in conjugation with the aldehydes by a Cys, Lys, His, or Tyr; and

(iii) the formation of 1,4-dialdehyde, which reacts with a Lys to form a pyrrole covalent adduct.

A look at the AChE co-crystal structure with an inhibitor (paraoxon in this case to locate the active site) as deposited with RCSB as 5HF5.pdb (DOI: 10.2210/pdb5HF5/pdb) , indicates that the closest reactive ε-amino group of a Lys residue is ~18 Å away. This distance is presumed too much for a covalent attachment of onchidal to AChE active site and thereby affecting AChE’s catalytic function. Likewise, there is no free sulhydryl available in the active site either, so a different residue may be involved as the point of attachment. The following figure below shows AChE with paraoxon shown with speres; Lys in green; and Cys in orange. The distance is in Å on the following figure I prepared: 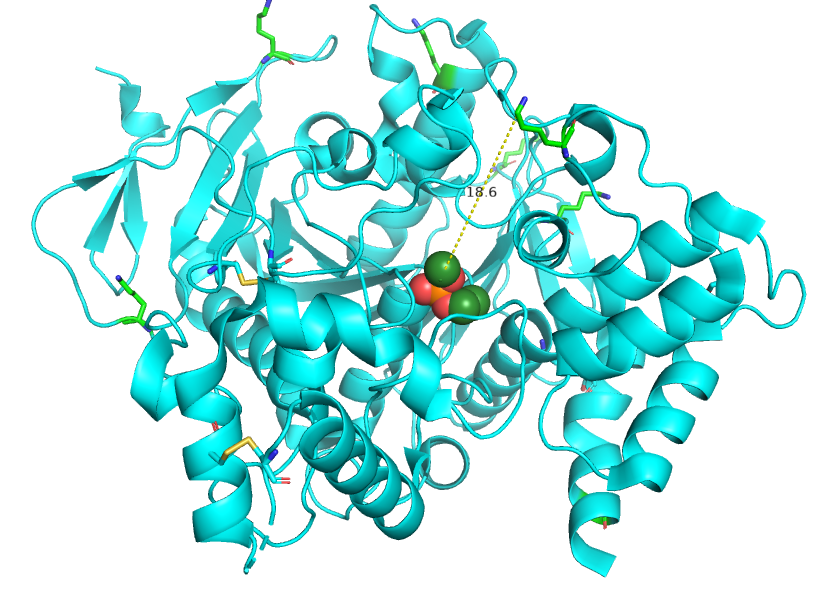 Stoddard (2014) proposed three docking poses for onchidal. Here is the figure S2 from their paper: 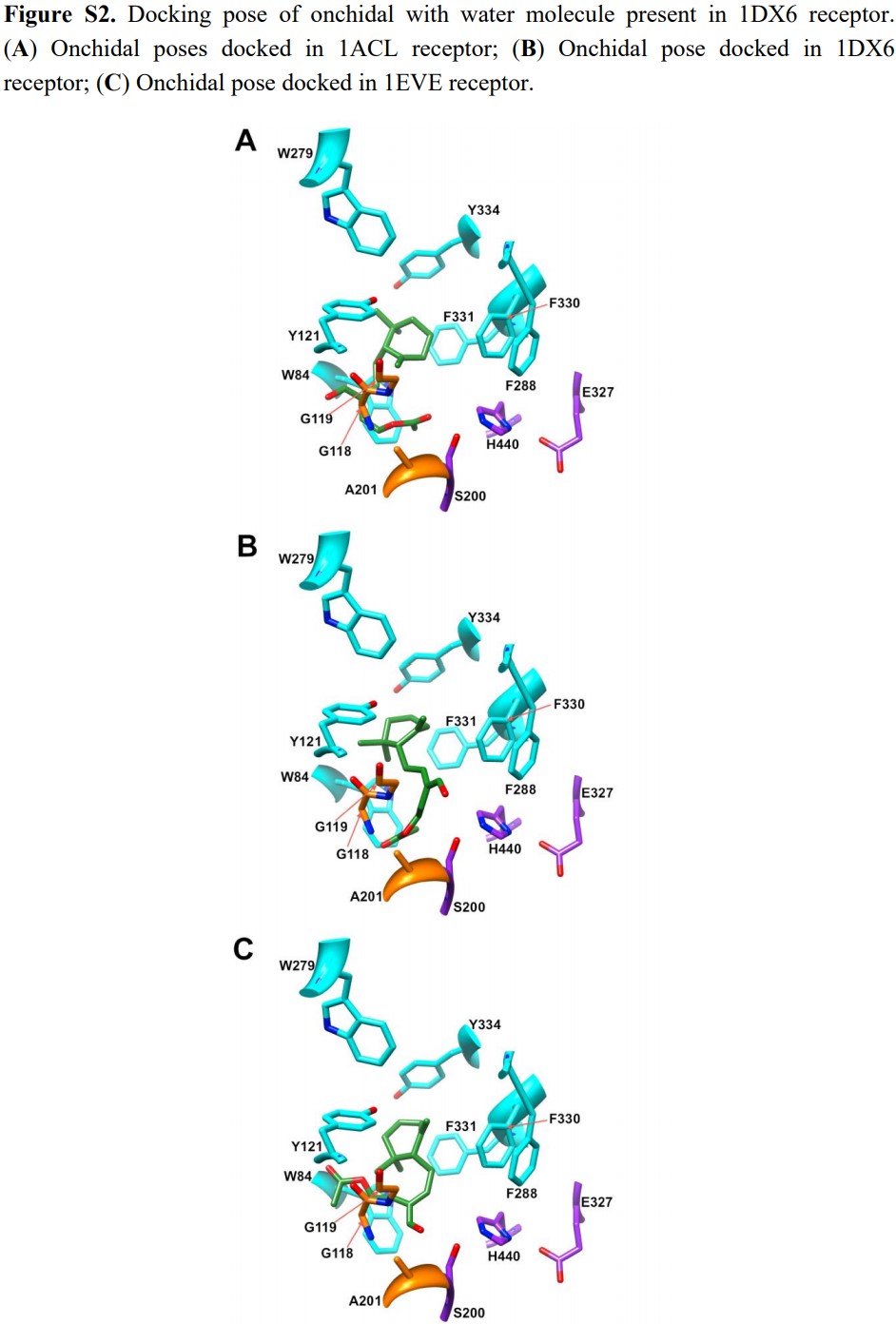 Only one His, the active site His-440, is located in the gorge. Several Tyr are located in the gorge; Tyr 442, 334, 130, 121, and 70. Based on the crystal structure and Abramson’s findings, the most probable mechanism is attack of the beta-unsaturated carbon in conjugation with the aldehyde by a Tyr; however a candidate Tyr for this mechanism was not identified from our docking analysis.

I’m wondering whether non-specific cellular esterases may convert Onchidal to an alcohol? If true, my speculation may change the docking analyses and ensuing inference. In any case, I’m not sure we have the full picture of Onchidal molecular mode of action, just yet.

Q.3: Why is the inhibition of AChE by Onchidal irreversible?

There is only scarce literature about Onchidal:(

The mechanism of the AChE blockade by Onchidal was suggested to be a novel one; it was not like the Sarin-like inactivation of the serine residue in the activation site (1). Note that alpha, beta-unsaturated aldehyde in Onchidal is potentially reactive. Onchidal has been shown to give some adducts to lysine residues in an enzyme (2).

2
How can glycine act as a buffer at pH 6.00 and why?
14
Why does fluorine act as a leaving group in organophosphates?
10
AChE Aging time of organophosphorus compounds containing hydroxyl groups
4
Why are isomers of parathion less active acetylcholinesterase inhibitors than paraoxon?
6
Does the mechanism of AChE inhibition by Isoparathion depend on chirality?
6
Why does aldolase not act upon glucose-6-phosphate?