I was given a question to answer:

Which of the following reactions is “not” exothermic?

Now, what my teacher told was that; the 4th reaction proceeds through a very unstable free radical as compared to the other three reactions. Therefore the 4th reaction must not be exothermic.

But I have a doubt that stability of an intermediate in any reaction can only give us an idea of the activation energy required to reach the intermediate from the reactant via a transition state. Whereas the stability of product (with respect to the reactant) determines whether a reaction is endothermic or exothermic.

So how do we check here product stability to determine exothermic or endothermic nature of the reactions?

Or if something is wrong in what I think then please correct it.

When using bond enthalpies, we can simplify the calculation by considering only those bonds that are broken or formed during the reaction, since the other bonds appear in both the products and reactants and so cancel out when we look at the difference.

[Here I'm using the standard convention that bond enthalpies are reported for the breaking of bonds and so are positive values.]

We now have reduced the problem to a simple comparison of the change of an $\ce{R-H}$ bond to an $\ce{R-Cl}$ bond.

You are correct that it does not matter what intermediates might occur on the reaction path. The radical stability is relevent, however, because the bond enthalpy is defined as the change in enthalpy needed for homolytic bond cleavage, ie

Since the products are radicals, the stability of the radicals gives us information about the bond enthalpy. It is for this reason that comparing the stability of radical "intermediates" is a way to tell which of your given reactions is not exothermic. 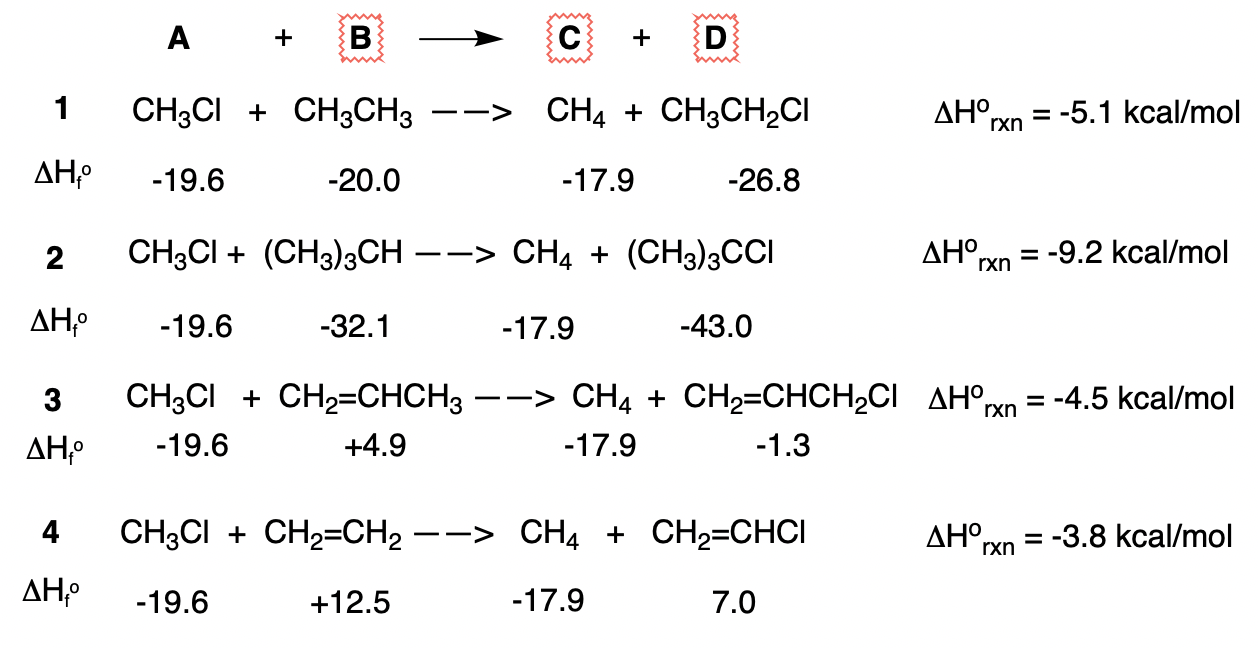 These data are reproduced in the first four entries of Chart 2. The NIST site lists other values for the heat of formation of vinyl chloride (Entries 5 & 6). The three values are in red in column ΔHfo D.

Another approach to the solution of the thermicity of these reactions employs BDE's. BDE's compiled by Ellison1 are all available except for the carbon-chlorine bond of allyl chloride. The reactants involve breaking bonds. The are assigned a positive value. The products have bonds formed and are given negative values. Summing up the rows gives the heat of reaction. Both methods give good agreement for reactions 1 (in yellow) and 2 (green). The BDE method for reaction 4 gives a value of -1.7 kcal/mol which is in good agreement with heats of formation values when the ΔHfo of vinyl chloride is taken as 9.1 kcal/mol rather than 7.0 kcal/mol.

If one is willing to accept that the results by the two methods are compatible, then the BDE for the carbon-chlorine bond in allyl chloride may be computed. The heat of reaction for reaction 3 from the former method is -4.5 kcal/mol. Using this value (in red) can be taken as the heat of reaction for reaction 3 by the BDE method. Therefore, the BDE for the carbon-chlorine is estimated as 67.6 kcal/mol. This value should be less that for methyl and ethyl chloride given the stability of the allyl radical over that of the methyl and ethyl radicals. 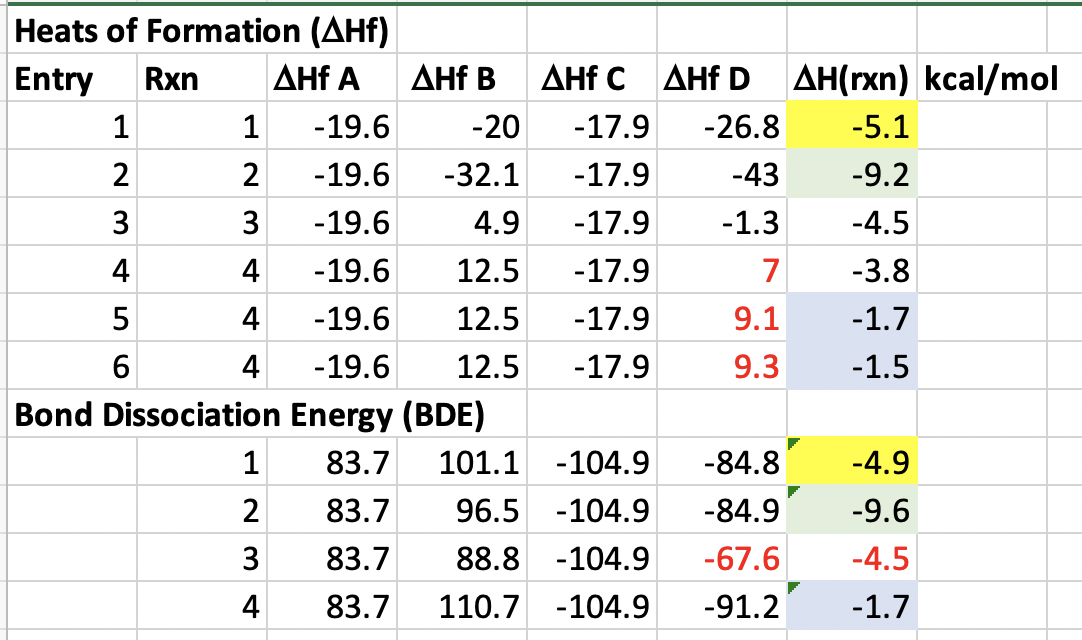 Not the answer you're looking for? Browse other questions tagged organic-chemistry reaction-mechanism thermodynamics or ask your own question.

5
Markovnikov's addition to halogenated alkene?
3
What does reaction exothermicity say about the stability of molecules
8
What is the difference between "bromine" and "bromine water" in their reaction with an alkene?
3
Reaction between RCH2=CH2 and CCl4 -- Why does it form RCHClCH2CH(R)CH2CCl3 along with RCHClCH2CCl3?
4
What determines the high degree of selectivity in free radical brominations?
6
What's the most appropriate name for this reaction?