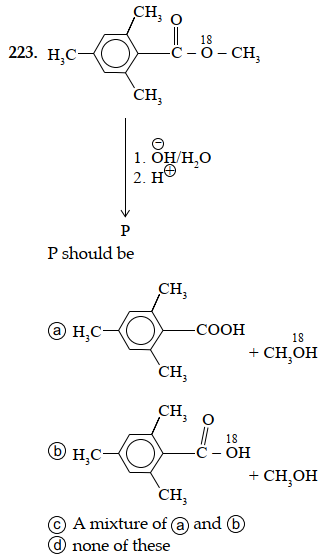 The given answer is b and I don't get why. Usual ester hydrolysis would've given a.

I somehow managed to know that the mechanism is SN2, but why? Also, if someone could provide the reaction mechanism, it would be wonderful.

In the typical reaction of hydroxide ion with a methyl ester, the hydroxide attacks the carbonyl carbon of the ester, resulting ultimately in elimination of methoxide. Given the basic conditions, the carboxylic acid formed immediately deprotonates to a carboxylate, and the methoxide is protonated to methanol. In older texts particularly, this reaction mechanism is referred to as BAc2, indicating "bimolecular base-catalyzed acyl-oxygen cleavage" (*) because the bond that is broken is between the acyl group and the oxygen of the methoxyl group [see for example Ingold, C.K. (1953) Structure and Mechanism in Organic Chemistry, Cornell Univ. Press].

An alternative mechanism is the BAl2 mechanism, designating "bimolecular base-catalyzed alkyl-oxygen cleavage". As the name suggests, in this mechanism, the bond between the alkyl group and the oxygen is broken. To do this, the hydroxide attacks the methyl carbon in an SN2 reaction, directly yielding the carboxylate and methanol products. This mechanism is also described in detail in Ingold's book and many other sources.

In the years since this mechanism was proposed, there has been some debate about how often it really occurs. Certainly for most esters, BAc2 is the dominant mechanism, and even when reaction by that mechanism is very slow, only a fraction of molecules, if any, react by the BAl2 option.

There seem to be two requirements for the BAl2 type reaction. First, the alkyl group must be methyl or a very ring-strained lactone. Other alkyl groups react much more slowly, as is observed in any SN2 reaction. Second, the carbonyl carbon must be sterically hindered to the point that the BAc2 mechanism is essentially impossible.

I am not certain that the tri-methyl benzoic acid in your question is hindered enough to react exclusively by the BAl2 mechanism, but it is certainly hindered enough that BAc2 would be substantially diminished.

You can find a more thorough discussion of these mechanisms in many textbooks, including the Ingold reference above. Another paper that may be useful is Mueller, P. and Siegfried, B. (1974) SN2 Reactions with Carboxylic Esters. Selective Cleavage of Methyl Esters. Helv Chim Acta 57:987.

*Note that since the net reaction in my example is $\ce{R-CO2Me + HO- -> R-CO2- + MeOH}$, the base is a stoichiometric reactant rather than a catalyst, so "base-catalyzed" is a misnomer. That terminology is used because the mechanism is the same if a different nucelophile is used, and the product is a non-acidic acyl derivative rather than a carboxylic acid. In that case, the base is indeed a catalyst.

1
Alkaline Ester Hydrolysis Reaction
1
What is the major hydrolysis product of 2,2,2-trifluoroethyl 2-acetamido-3-phenylprop-2-enoate?
5
Which side of the C-O-C bond breaks in esters during hydrolysis in basic medium?
4
Hydrolysis of an ester
2
Hydrolysis under basic medium
4
LiOH hydrolysis of methyl 2,2-dimethoxyacetate not giving product?
4
Mechanism of Acid Hydrolysis