Is there an error in a Wikipedia article explaining the influence of oxidation states?

Referring to the series of oxoacids of chlorine: $\ce{HClO, HClO2, HClO3},$ and $\ce{HClO4}$, tabulated in the Wikipedia article on electronegativity, the article states, in the section near the end titled "Variation of electronegativity with oxidation number":

“As the oxidation state of the central chlorine atom increases, more electron density is drawn from the oxygen atoms onto the chlorine, reducing the partial negative charge on the oxygen atoms …” and illustrates it with a table. (NB There is an ambiguity in the use of the word "reducing" which is the opposite of "oxidising", but the intended meaning in terms of increasing or decreasing electron density is clear in the Wiki statement.)

But as I understand it (and as also given by the rules for assigning oxidation numbers), insofar as oxidation state represents the number of electrons that an atom can gain, lose, or share when chemically bonding with an atom of another element, the table is correct, but shouldn’t the textual statement be the converse:

When we move on to $\ce{HClO}$, then it becomes (+1, +1, -2 respectively) as the single oxygen with stronger electronegativity than chlorine is assigned the oxidation state -2, so that balancing the total means the electronegativity of the central chlorine must change from -1 to +1 (in agreement with the table on the Wiki page, but not with the article’s statement about the direction of change of electron density.

And as we move along the series to $\ce{HClO4}$, the central chlorine is having more and more electron density sucked off it by the four more electronegative oxygen atoms, resulting in the final oxidation states (+1, +7, -8), in agreement with the table in the above-cited Wiki article, but not with the article's textual explanation.

So I conclude that the text statement in the Wiki article is currently wrong (and if so I will amend the Wikipedia article) - or else I'm wrong, and would appreciate someone pointing out my own error…?

Please do not edit the Wikipedia article, as your wording is incorrect, and the existing wording, while awkward, is correct.

What the article is trying to say is that the electron density on each oxygen is less as the oxidation state of the Cl increases. We can understand this by imagining progressive oxidation starting with $\ce{HClO}$. Here, the Cl has oxidation state +1 and the O is -2. But of course the oxygen doesn't have a full negative 2 charge. Some of that charge is shared with the chlorine and the hydrogen, neither of which has a full charge of +1.

To get to $\ce{HClO2}$, we can imagine reacting $\ce{HClO}$ with a neutral oxygen atom (oxidation state 0). After the reaction, the oxygen will have oxidation state -2, and the Cl will now be +3. Again, these are not the formal charges, but give us a hint about where charge will be located. The oxygen will have a partial negative charge, which means the chlorine will have to lose some of its electron density, increasing its actual charge. The original oxygen from $\ce{HClO}$ is still there and feels a stronger "pull" on its electron density, so it gives more to the chlorine, and the oxygen's partial negative charge becomes less negative.

Completely making numbers up, we could imagine that in $\ce{HClO}$, the charge on oxygen is -1, on chlorine is +0.25 and on H is +0.75. After adding the second oxygen to make $\ce{HClO2}$, the charge on the new oxygen might be -0.5, on the already attached O might be -0.75, +0.75 on H and +0.5 on Cl. Do you see how the negative charge on each O gets smaller in magnitude, but the total negative charge on oxygen(s) gets larger in order to offset the increased positive charge of the more oxidized chlorine? The Wikipedia statement refers to the individual O's not the sum.

The effect can also be clearly seen in the dissociation constants of the oxoacids of chlorine. The effect is much larger than could be explained by the negative charge being shared among a larger number of oxygen atoms, which would lead to a difference in pKa of log10(​1⁄4) = –0.6 between hypochlorous acid and perchloric acid. As the oxidation state of the central chlorine atom increases, more electron density is drawn from the oxygen atoms onto the chlorine, diminishing the partial negative charge of individual oxygen atoms. At the same time, the positive partial charge on the hydrogen increase with higher oxidation states. This explains the observed increased acidity with increasing oxidation state in the oxoacids of chlorine.

There is a nice illustration of the partial charges of the protonated and deprotonated species on the Libretexts site. The $\mathrm{p}K_\mathrm{a}$ values quoted at Wikipedia and the textbook referenced above don't match up, especially those below zero, so there is still room for consolidation and improvement. 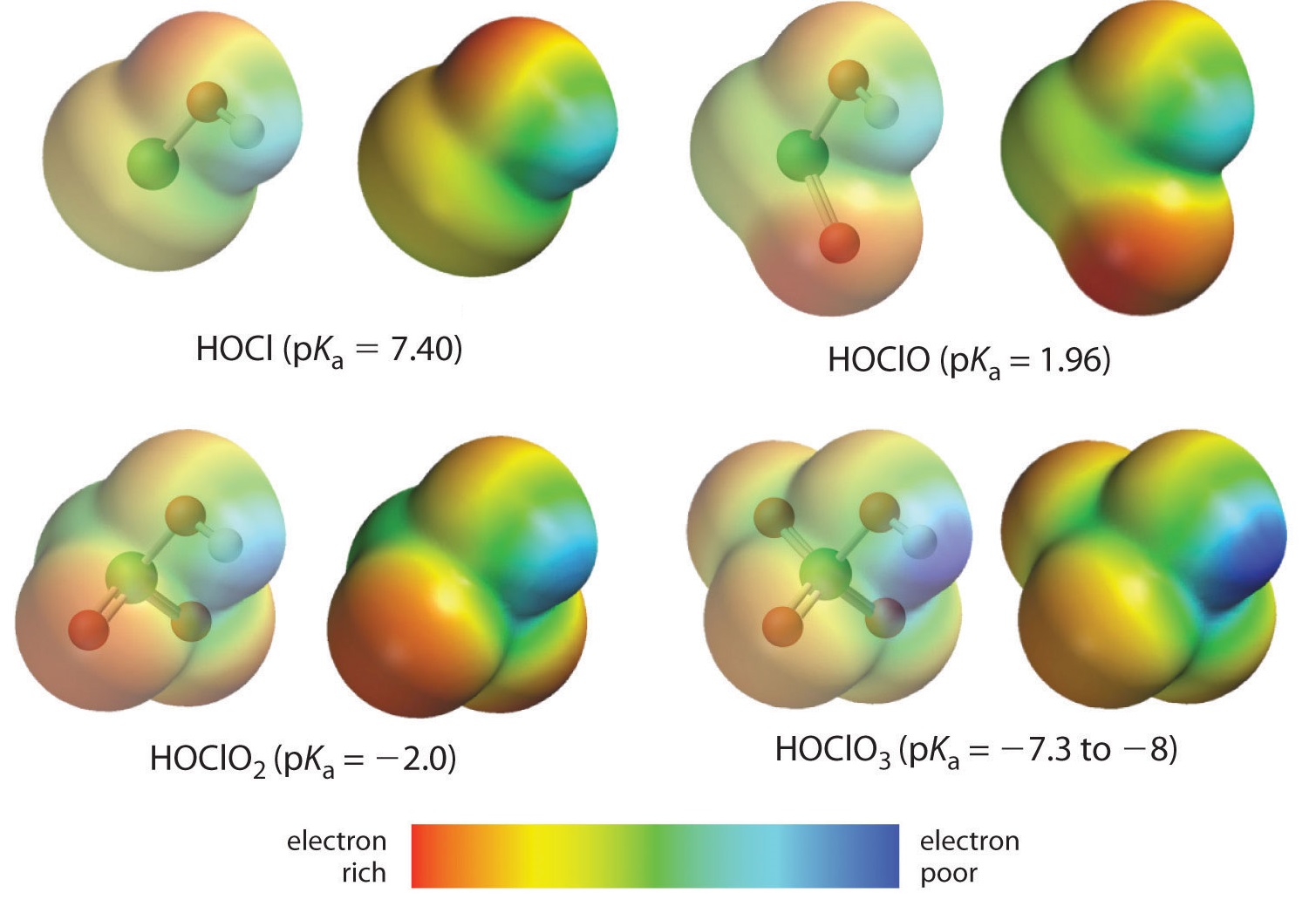 Not the answer you're looking for? Browse other questions tagged inorganic-chemistry oxidation-state electronegativity or ask your own question.