So, suppose we have the above situation. In this, a radical is formed at the carbon of the 6 membered ring at which one $\ce{-CH3}$ is attached since the bromination is selective, but will it form enantiomers? That is, can the $\ce{^{.}Br}$ radical attack from both sides?

In this question, the answer given is (c), but I think that enantiomers can not form, as the electron of the radical would be present only on one side of the radical carbon, and so cannot migrate to other side. 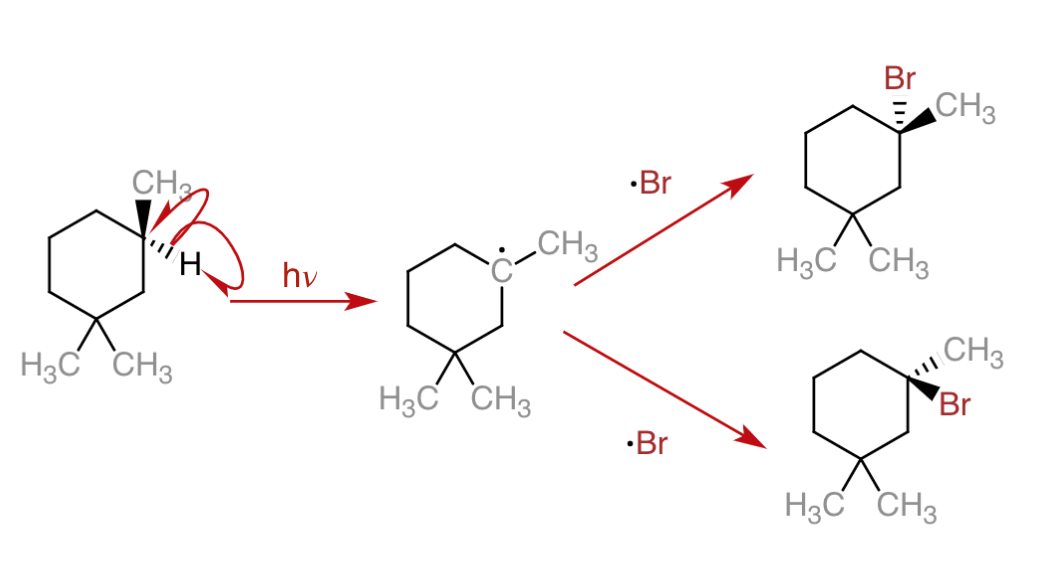 In the first step, due to the selectivity of bromine in a free radical reaction, the tertiary carbon which has a $\ce{-CH3}$ group attached to it forms the radical.

You may have noticed that both products are enantiomers of each other and hence the answer would be (c).

Not the answer you're looking for? Browse other questions tagged organic-chemistry stereochemistry hybridization radicals halogenation or ask your own question.

7
Stability of furanose vs. pyranose form of glucose?
5
Photolysis of N-bromo compound in acidic conditions (radical cyclisation)
9
Stereochemistry of cyclic hemiketal formation
7
Why does the light catalyzed radical addition of tetrachloromethane to an alkene produce only a single regioisomer?
0
What is it meant by two different groups in stereoisomerism?
18
Why are two three-membered rings preferred to a single five-membered ring in the reaction of a dihalide with alcoholic KOH?
1
Why does Oxygen act as Nucleophile over here?
3
How to carry out cyclization of 1‐(2‐methylbutyl)‐2‐nitrocyclohexane?