In a redox reaction, why does more than one oxidation state of an element form? 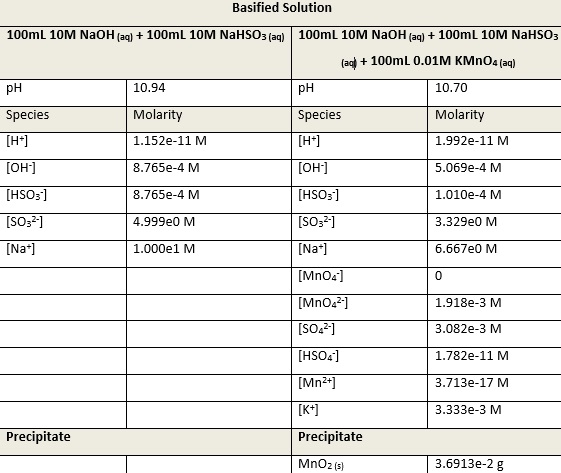 They all appear because they are all finite amount of energy apart, but note that some concentrations are many orders of magnitude greater than others, and the concentration of $\ce{MnO4-}$ is so low that the table shows a zero.

Predicting the concentration requires being able to read tables of potentials. In standard tables like http://bilbo.chm.uri.edu/CHM112/tables/redpottable.htm you will find equations such as $$\ce{MnO2{}+4H+ +4e- \rightleftharpoons Mn + 2H2O}\quad (1.23\mathrm{V})$$ and $$\ce{Mn^{2+}{}+2e^- \rightleftharpoons Mn}\quad (-1.185\mathrm{V})$$ (the numbers in parentheses are the standard reduction potentials, $E^\circ$, always measured in volts).

With this and the Nernst equation you can relate the concentrations of any set of species that form a balanced reaction. In a complicated mix like this you don't know a priori the concentration of any species, only the certain sums (for instance, for all sulfur-containing ions) but you still can, perhaps iteratively, solve the corresponding set of algebraic equations and find the individual concentrations. All the equilibrium equations have to be satisfied simultaneously; if they aren't the system is not in equilibrium.

(In this answer I've used the word "concentration" but the equations written with concentrations are only approximately satisfied; to account for second-order effects the notion of "activity" was introduced, and while it is an essentially empirical notion, it's still useful if the dependence of activity on concentration for a particular problem has been tabulated.)

Not the answer you're looking for? Browse other questions tagged acid-base redox aqueous-solution ions oxidation-state or ask your own question.

5
What are the products for the redox reaction HCl + SnCl₂ + KMnO₄?