For instance, parathion has an intraperitoneal LD50 in mice of 3 mg/kg, the LD50 for methyl parathion administered in the same way is 5.4 mg/kg, making it almost two times less toxic than parathion. Methyl parathion differs from regular parathion in that, in methyl parathion, the ethyl groups are replaced with methyl ones.

How does this structural difference contribute to a difference in toxicity? Why is methyl parathion significantly less toxic than its ethyl analog?

Both methyl parathion (O,O-Dimethyl O-(4-nitrophenyl) phosphorothioate) and ethyl parathion (O,O-Diethyl O-(4-nitrophenyl) phosphorothioate) are organothiophosphates with identical structure except for dimethoxy group in methyl analog has been replaced by diethoxy group in ethyl analog. Both analogs are acetylcholinesterase (AChE) inhibitors, although phosphorothioates ($\ce{P=S}$) are less potent inhibitors compared to corresponding phosphate ($\ce{P=O}$) analogs. The active site of AChE is depicted in following Figure (Ref.1) where acetylcholine (ACh) get hydrolyzed: 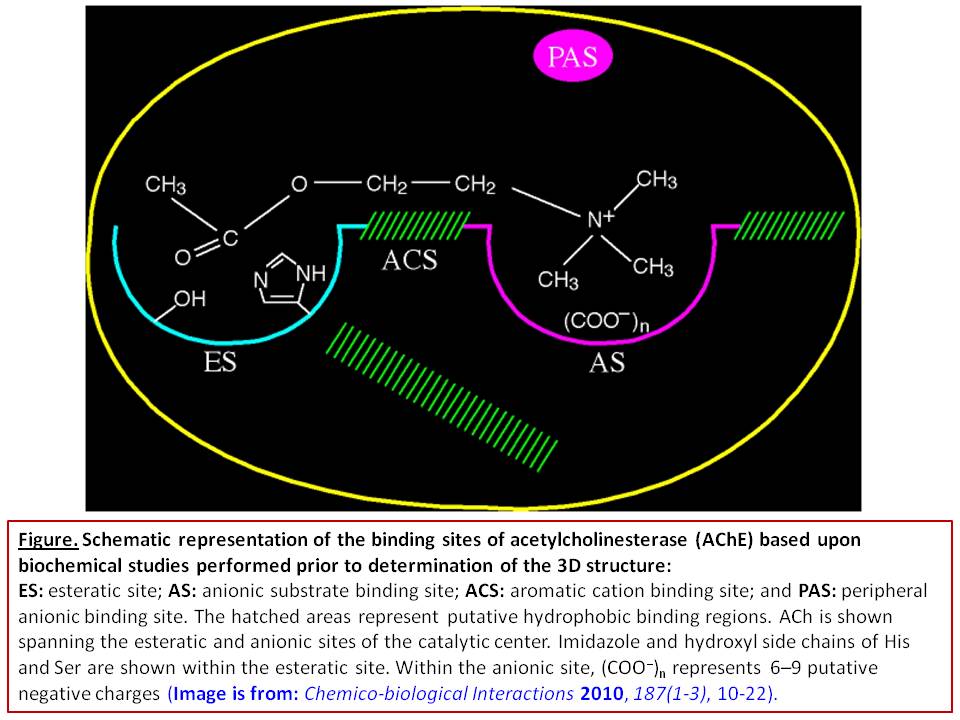 Although aging can be visualized by the process of hydrolyzing ester group by water molecule attacking phosphorus atom first, replacing $\ce{R-O-}$ group followed by proton exchange, the literature has shown preferably $\ce{O-R}$ breakage. If that's the case, ethyl breakage is facilitated over methyl breakage just by stability of the resultant products ($\ce{CH3CH2^+}$ vs $\ce{CH3^+}$). Hence, we can conclude that ethyl parathion is more potent than methyl parathion.

It is also worth noting that recent studies on versatility of imidazoles or in reactions with organophosphates (OPs, Ref.3). According to this study, OPs from the $\ce{P=O}$ family, imidazole attacks the phosphorus atom exclusively, making $\ce{P-N}$ bond. With the less reactive $\ce{P=S}$ family, an unusual N-alkylation predominates. Surprisingly, imidazole reacts with methyl parathion exclusively at the aliphatic carbon, whilst for ethyl parathion, imidazole reacts by two pathways: at both the phosphorus and aliphatic carbon, with predominance for the latter: 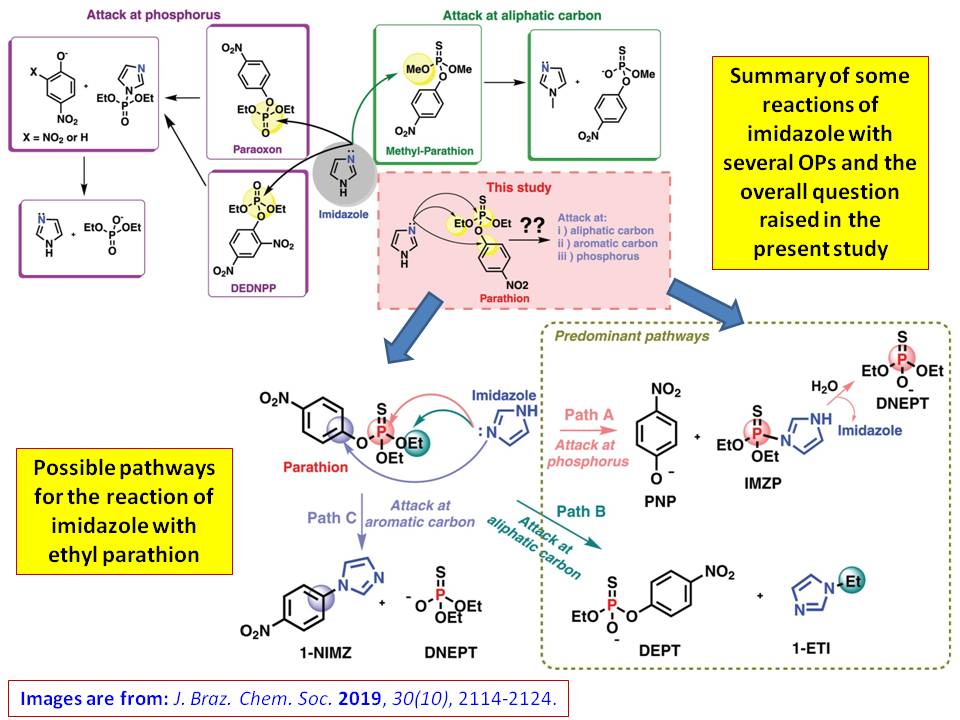 Since immidazole moiety is present in active site of the AChE, one can suggest the different reactivity of ethyl parathion over methyl parathion with imidazole may play a role in their different activity in inhibition.

Not the answer you're looking for? Browse other questions tagged organic-chemistry biochemistry molecular-structure toxicity organophosphorus-compounds or ask your own question.

0
Structure-Activity Relationship of Chlormephos and Parathion

10
Why is mercury much more toxic when inhaled than injected?
33
Why is methanol toxic?
7
Synthesis of ethyl methyl ketone from 2-(4-hydroxyphenyl)ethyl methyl ketone
23
Why is the cyanide ion toxic?
4
Why are isomers of parathion less active acetylcholinesterase inhibitors than paraoxon?
15
Is Fluorine more toxic than Chlorine?