Why water cools from outside to inside?

It is a well-known fact that

Water kept in a container, on cooling, results in freezing with initially at the circumference of surface (1D), then on the surface (2D) and then throughout the volume (3D).

Why does it happen that way?

I thought that this may be due to their exposure levels.The outer surface is more exposed to cooling than the inner ones and hence cools first.However, I am not satisfied with this explanation.

I think there is some relation between this and degrees of freedom.I feel as there are more degrees of freedom in 3-D, there's more movement you should suppress to lower its energy, so maybe they freeze slower.

Is the above reasoning correct? I would also like to know different ways to reason out this.

This has everything to do with heat conduction, Setting aside freezing or melting for the time being, the two things that are happening in combination are (1) heat conduction and (2) the capacity of a parcel of solid to store thermal energy by its temperature changing. Heat conduction is driven by a spatial gradient in temperature, with heat flowing from a hotter region to a colder region.

This can all be described mathematically and modeled by the so-called transient heat conduction equation.

The cooling takes place at the surface provided that it is at a lower temperature than the interior, experimentally this is confirmed. The mechanism is by collisions between molecules transferring energy to one another, those with more energy transfer to those with less, this takes place in time and space and is macroscopically measured by the thermal diffusivity coefficient. We can describe this using Ficks' laws and an example is shown in the figure which I had recently calculated for other purposes. It illustrates what happens after a small circular region of a thin sample of absorbing material is excited by a laser. You can observe how the heat spreads both in time and space. The total energy remains the same so as the spatial extent increases the temperature at the centre falls but increases elsewhere. The circle shows the region initially heated. 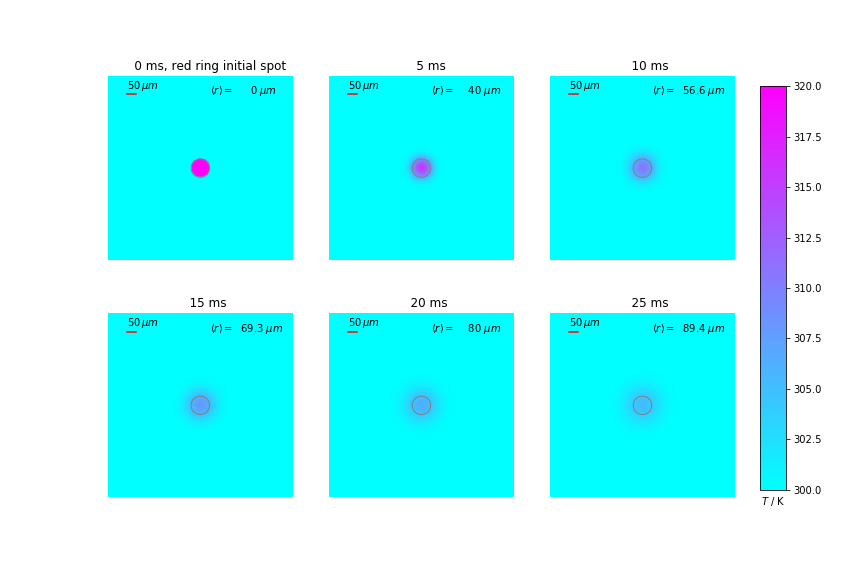 Definitely in agreement with Chet, but does this not also have something to do with increased nucleation sites at bounds of the container?

If a container of water was super cooled and a foreign object was introduced at the center of the container, we would observe freezing from the center outward.

Not the answer you're looking for? Browse other questions tagged thermodynamics everyday-chemistry solid-state-chemistry or ask your own question.

2
Figuring out the volume of air trapped inside a bottle of water
1
Does all processes that consume energy from outside result in negative entropy change?
4
Making ice from carbonated water
3
Vacuum good inside a box?
38
Why super glue does not stick inside their own bottle?
1
Water from coffee condensation
1
Find whether a gas cools or heats up on Joule-Thomson expansion