Is there a geometrically intuitive explanation of the equivalence of the numbers of irreducible representations and symmetry classes?

In group theory, as used in chemistry, we’re familiar with the idea that the number of irreducible representations of a symmetry group equals the number of classes of symmetry operations, e.g. three in the case of the $C_\mathrm{3v}$ group describing the molecular structure of the ammonia molecule.

There are proofs of this fact, ranging from the properties of the Great Orthogonality Theorem and discussions of the dimensionality of the vector space of characters e.g. as given in R. Mirman’s Group Theory: An Intuitive Approach, through to more mathematical proofs relying on the application of Brauer's permutation lemma to Galois automorphism on conjugacy classes, as shown in https://groupprops.subwiki.org/wiki/Number_of_irreducible_representations_equals_number_of_conjugacy_classes.

But given the physical nature of molecular structure and the geometric properties of the molecular orbitals corresponding to the symmetry group’s irreps, is there no geometrically intuitive explanation of exactly why the number of irreps and classes are the same?

The geometrically intuitive justification for why the number of irreducible representations and classes are the same is because:

NB A detailed reply to @Porphyrin's comment under the question, which is too long to insert as a comment in reply, is given at the end of this answer.

DETAIL For those who, like me, think in more of a visual/intuitive than abstract algebraic manner:

In chemistry, we can easily visualise the groups of the physical symmetries of molecules as combinations of symmetry operations transforming an image of the molecule (for atoms, it is simply the group SO(3) of rotations in R3).

The irreducible representations of the group illustrate the transformation properties of the component molecular or atomic orbitals under the operations of the molecular group, and can also be visualised as corresponding directly to both geometrical objects in physical space (i.e. the spatial distributions that are modelled as the MOs or AOs themselves) and, a bit more schematically, as vectors in invariant subspaces of a Hilbert space of functions representing AOs and MOs.

I think of this in terms of the visualisable spatial structure of the molecule overall (even as a ball and stick model for the purposes of understanding its symmetries) being analysed by group theory (or, if you prefer, resolved into) a set of different component geometric/physical structures – the molecular or atomic orbitals (all having the correct symmetry properties, regardless of the approximation method used in their computation).

[Please note that I’m choosing my words very carefully as there’s much confusion in discussions of representation theory due to frequent abuses of language, especially by mathematicians and by others who are so familiar with the material that they cease to be aware of how easily students can be confused by such abuses.]

So the transformation properties of the component MOs under the overall molecule’s group operations are encoded in the irreducible representations of the group and, for most purposes, conveniently summarised in the associated character tables, listing the traces of matrix representations of the group operations on suitable basis functions). Character tables can be considered as a shorthand version of the irreps since they contain most of the information of use to chemists.

Indeed, one can say that “the molecular orbitals are the irreducible representations” of the group, in much the same way that Wigner’s Classification leads to the rather more mysterious statement that “fundamental particles are the irreducible representations of the Poincare’ Group”; in that case, it’s the symmetries of transformations in spacetime, under the Lorentz Group plus translations, yielding the Poincare’ group).

Just as we can visualise the orbital geometries described by the irreducible representations, likewise the classes of a molecule’s symmetry operations are also easily visualised.

Therefore the answer to the original question comes by considering the other way of imagining the MOs, as vectors in invariant subspaces of a Hilbert space of functions.

The characters of the irreps will be the same for each symmetry operation of a given class; so for $C_\mathrm{3v}$, for example, all three mirror planes σ will have characters of 1 for the A1 rep, -1 for the A2 rep and 0 for the 2-dimensional E rep. 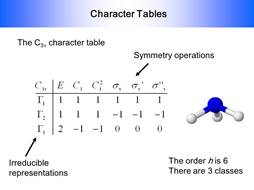 This says to me that the molecular-orbital wavefunctions (i.e. irreducible representations) each span a subspace of the Hilbert space of molecular orbitals defined or bounded by the classes. No symmetry operation will take an MO with characters = 1 for the mirror planes (i.e. those MOs unaffected by reflections in any of the three mirror planes) into any subspace in which reflections invert the sign of the MO function.

There are three such classes for $C_\mathrm{3v}$, so the MOs appear to be limited to, or bounded by, three subspaces of the Hilbert space.

I conclude therefore that the geometrically intuitive justification for why the number of irreps and classes are the same is that:

i) I’m aware of group theory’s abstract nature, for example permutation groups; but even they can have a physical realisation. When group theory is applied to material systems, there should be some sort of physical interpretation.

ii) Some people are content to work with a purely abstract sense of groups, while others find it helpful to have a more intuitive, often geometric sense. You might be familiar with the famous mathematician Jacques Hadamard’s On the Psychology of Invention in the Mathematical Field in which his survey of leading mathematicians and theoretical physicists’ in the mid C20th found a propensity to think in visual imagery.

iii) It’s reasonable to claim that mathematical models often usefully represent physical realities. Recall the title/quote from the 1960 lecture by one of the supreme masters of symmetry in physics, Eugene Wigner: The Unreasonable Effectiveness of Mathematics in the Natural Sciences

Not the answer you're looking for? Browse other questions tagged molecular-structure symmetry group-theory or ask your own question.