I have always believed that it is impossible for the atoms of period 2 elements (when they are the central atoms in polyatomic ions/molecules) to accommodate more than 8 electrons in their valence shell. This is because of their small atomic size, which results in a significantly higher electron density being borne by the central atom and thus, instability can easily arise if too many electrons are held by it. Having seen many posts on this forum on the concept of hypervalency, I understand that many seemingly "hypervalent" molecules (e.g., $\ce {PCl5}$, $\ce {SF6}$, $\ce {ClO4^{-}}$) do not really have their central atoms possessing more than 8 electrons in their valence shells. This is due to the electron-withdrawing effect of the electronegative atoms that are bonded to the central atom, often resulting in there being less than 8 electrons populating the valence shell of these central atoms (Gillespie and Silvi, 2002).

However, my belief has recently been challenged by the existence of the orthonitrate ion, in which the $\ce {N}$ atom is claimed to possess $\ce {8.65}$ electrons in the valence shell (as written in the "Alternative definition" section of this article). This seems rather nonsensical to me as the $\ce {O}$ atoms surrounding it are more electronegative than the central $\ce {N}$. I would like to request for a verification of the claim regarding $\ce {N}$ possessing more than 8 electrons in the valence shell. Additionally, I would also like to ask if the ionically-bonded structure with one $\ce {N^+}$ and four $\ce {O^-}$ is an accurate representation of the bonding in the ion.

When you learn molecular orbital theory, you learn to throw the octet rule out the window in favor of identifying the molecular orbitals that form the actual bonds. Take a look at the seemingly innocuous case of carbon dioxide discussed in Chemistry LibreTexts (illustration from this reference): 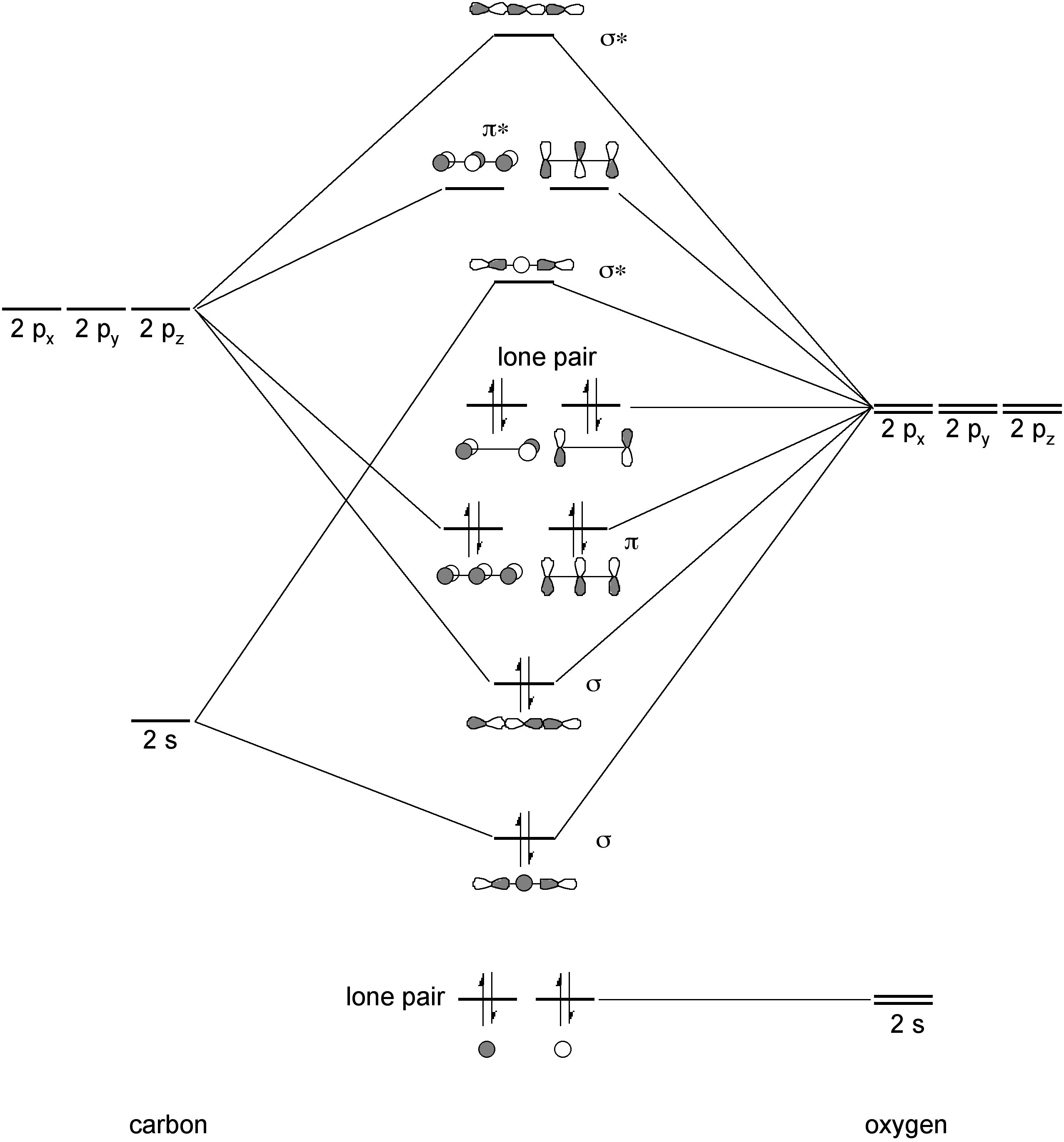 There are really two related ways in which the molecular orbital reality blows the octet rule away even though you thought the familiar Lewis structure $\ce{O=C=O}$ obeyed this rule.

First: The octet rule assumes that electrons in covalent bonds are shared between pairs of atoms at the ends of the respective bonds. In the above diagram they're not. Most of the occupied orbitals share electron density between all three atoms and those that don't are concentrated at the two oxygen atoms, not at the ends of either carbon-oxygen bond. This three-way sharing is especially notable with the pi bonds; the structure I drew above is really not an accurate way to describe the pi bonds. You really need a combination of pairwise valence bond structures even to begin to approach the molecular orbitals:

In effect, the carbon-oxygen bonds with this multiple-atom sharing are not just double bonds. They are a mixture of single, double and triple bonds providing more overall bonding than just plain pairwise double bonds could have.

Second: Given this multi-way electron sharing the number of occupied orbitals that are at least partly shared by any atom can go well beyond four. In the case of carbon dioxide this is especially true of the oxygen atoms, each of which has a finger in the pie of all sixteen valence electrons. In the case of carbon dioxide it is true that each oxygen atom cannot have more than half of that electron density close to it, but that is a property of the specific compound carbon dioxide (which has only sixteen valence electrons to work with among all three atoms) and not a universal law of nature.

This should give you some idea of what goes on with a more complex structure such as your orthonitrate ion. Electrons are not shared pairwise but among multiple atoms in molecular orbitals, and with this multi-way electron sharing the bonds are not really confined to specific pairs of atoms. What looks like single, sigma-only bonds between the nitrogen and each oxygen atom are really a combination of sigma and pi bonding interactions, delocalized through a complex molecular structure; and each $\ce{N-O}$ interaction is thereby a combination of single bonds, multiple bonds and even purely ionic interactions. Assigning a meaningful atom-by-atom electron count to such a structure is, as Mithoron suggests, fuzzy math.

Not the answer you're looking for? Browse other questions tagged bond molecular-structure valence-bond-theory or ask your own question.

10
Does sulfur and phosphorus expand their octet?
13
How do electronegativity and lone pairs affect bond angles?
7
What is the highest possible expanded octet?
1
My text seems to say that the high(est) energy orbitals are not valence orbitals - everything else says otherwise. What's true?
6
Oxidation state of nitrogen in HN3
2
Formal charge and valence shell