If I break a crystal, would the "broken" pieces also have the same crystal shape? [closed]

If I've a crystal of some particular geometrical shape and i hammer it and it breaks into small pieces. Will the small pieces have the same shape as of the parent crystal?

In most cases, a random hammering on a crystal will smash the later into randomly shaped, even irregular pieces of matter. As shown in the video suggested by @andselisk however, if you aim parallel to the cleavage planes you may obtain fragments which are similar to each other. This similarity however is not necessarily about the shape of the objects (as in «a cube yielded smaller cubes»), nor in the ratio of the side lengths of the smaller fragments. The similarity you may find is that the constant angle two faces enclose for one crystallographic phase of a given compound as illustrated below:

(adapted from enter link description here, part of this)

This form of regularity was identified by the Danish Niels Steensen, better known as Steno's law of the constancy of interfacial angles, published in 1669 which you may read digitized e.g., on archive.org. 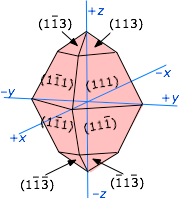 for example because the speed of propagation of light and refractive index generally depends on the direction in respect to the crystal's coordinate system. Knowing the correct orientation helped you to pick the right face to look at while using the sunstone (described further here).

Addition: The video shows how to split inorganic crystals with hammer and razor blade, which may appear as brute. But it is not. Indeed, the technique equally is used today in crystallography to «cut» needle-shaped crystals of organic matter into specimen around 0.3 x 0.3 x 0.3 mm (or below) before mounting them on a diffractometer. Not only that this may be a delicate act dangerous to the sample quality (which you estimate rapidly while recording the data), often, you need only a very gentle tap with the razor blade along the cleavage plane to perform it.

4
Allotropy and polymorphism
6
How would one construct a 3D model of a molecule based on the crystal structure of its salts?
3
Why some compounds form different crystal structure at different temperature?
5
Is NaCl crystal always going to have even number of atoms?
0
Aren't unit cell and the relevant crystal similar?
4
Is (high) pressure required to form (quartz) crystals?
9
How many crystal forms of HCl have been identified - where to find the unit cells/lattice constants?
4
Shape of urea molecule around N atom
3
Influence of the neighbouring molecules in a crystal at the example of XeF4