What is the magnetic moment of tris(oxalato)nickelate(IV)?

I'm really struggling with finding the magnetic moment of this complex: 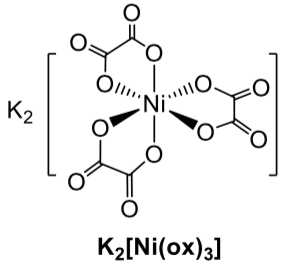 If the compound is really nickel(IV), then there are only two choices: a high-spin $\mathrm d^6$ or a low-spin $\mathrm d^6$ configuration, corresponding either to 4 or 0 unpaired electrons. As higher oxidation states make low-spin configurations more likely (due to the lower energy of metal orbitals which means the energy is more similar to the corresponding ligand orbitals leading to greater stabilisation and destabilisation of bonding/antibonding orbitals; $\mathrm{t_{2g}}$ is nonbonding while $\mathrm{e_g^*}$ is antibonding if π effects are ignored, so the energy difference increases), I would expect a nickel(IV) compound to be diamagnetic rather than paramagnetic.

However, oxalate is easily oxidised to carbon dioxide and likewise transition metals in unusually high oxidation states (which is true for nickel(IV)) are typically very good oxidation agents as their reduction is preferred. Therefore, I highly doubt this complex would be stable and suggest it immediately decomposes to carbon dioxide and a nickel(II) or nickel(III) complex. To quote Wikipedia:

Ni(IV) remains a rare oxidation state of nickel and very few compounds are known to date.

Thus, I am inclined to suspect some kind of typo. Two unpaired electrons would correspond to the well-known nickel(II) $\mathrm d^8$ system and tris(oxalato)nickelate(II) would seem much more likely.

Not the answer you're looking for? Browse other questions tagged inorganic-chemistry coordination-compounds magnetism crystal-field-theory or ask your own question.

7
Total magnetic moment of atom
4
How can the electronic structure of pentaaquanitrosyliron be explained?
4
What accounts for the high spin state of the complex Tris(acetylacetonato)iron(III)?
15
Why isn't the orbital angular momentum also considered while calculating the magnetic moments 3d transition elements?
2
Jahn Teller distortion and magnetic moments.
1
Magnetic moment from given CFSE value