Are they thought to continuously pop in and out of existence at various points inside the orbital defined by probabilities or do they follow definite paths that are made fuzzy by the Heisenberg uncertainty principle? I sometimes find myself as thinking of the electron cloud as a gas with varying charge density corresponding to the shape of the atomic orbital.

I think you miss an important notion to get a better understanding of the behavior of the electrons: wave-particle duality. I believe that a better visualization takes into account that you have to deal even with a wave. From what you say it seems that your picture is shifted only to the particle-side, keep meditating for a half an hour trying to visualize the electron as a wave. For me is a very interesting mind experiment. Then move to the orbital concept.

At Lund University researches took a picture of a moving electron. This image maybe could be helpful for your meditation: 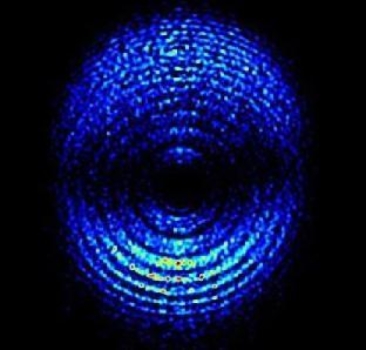 The interpretation of quantum mechanics is an unresolved issue in physics and philosophy.

I sometimes find myself as thinking of the electron cloud as a gas with varying charge density corresponding to the shape of the atomic orbital.

Are they thought to continuously pop in and out of existence at various points inside the orbital defined by probabilities or do they follow definite paths that are made fuzzy by the Heisenberg uncertainty principle?

I hear you. I have been struggling with trying to visualize it as well. The problem is that when we get down to this world of quantum effects, stuff stops being easy to visualize just on the basis of pure weirdness. Whomever in the comments said "don't visualize it" is basically correct. But here goes anyway, following good advice is optional =)

I did however have some epic a-ha moments when I saw the models of vibration modes of circular drums. Especially as you go up in modality - it is fascinating to see the vibration mode $u_{21}$ and then think of the 3d orbital shape.

The Heisenberg uncertainity principle basically arises when we need to for instance pinpoint the exact location of the electron (how can momentum be preserved when we reduce the drums' surface area down to a point) - For me it is always easier to think of the electron as smeared out over a surface (or, better yet a space) until we actually try to locate it - at which point it will coalesce into a particle.

Disclaimer: All of this is factually B.S. - the only model that can accurately represent any single part or property of the universe - is the universe.

Not the answer you're looking for? Browse other questions tagged electrons quantum-chemistry orbitals or ask your own question.

3
Do really the electrons could only orbit in specific orbits with a fixed radius?
-1
Do electrons in an atom revolve around the the nucleus clockwise or counterclockwise?
-1
Are electrons in a helium atom diametrically opposite?

6
Meaning of depiction of atomic orbitals
8
Can electrons switch orbitals within a shell?
5
How do electrons travel through nodes
13
How fast do electrons move around the nucleus?
10
How do Electrons Cross Nodes in Orbitals?
0
How do the atomic orbitals look like in reality?
0
Atomic Orbitals