Regarding this question, how can one solve this without access to thermodynamic data?

I suppose we should keep the following information in mind:

1) Double bonds are not double the strength of single bonds. Same goes for triple bonds. Reason has to do with orbital overlap with regard to sigma and pi bonds.

2) In order of increasing stability: $\ce{O_2, O_3, O}$. We know this because diatomic oxygen is what usually exists in large quantities at ground level; ozone is a pollutant because it is quite reactive and can thus harm tissues; we don't usually hear of monoatomic oxygen.

b) Definitely not the answer. Going from ozone to diatomic oxygen exclusively.

e) Definitely not the answer, this is fundamentally exothermic.

How can we definitely pick out the right answer? What reasoning would you employ?

I believe that you would have to know at least these things to start with:

We can summmarize these facts with the following figure: 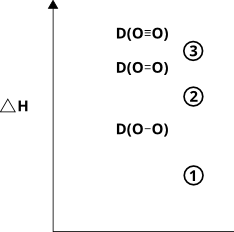 Here D(O-O) represents the bond dissociation enthalpy of an oxygen-oxygen single bond. The numbers inside of circles represent "steps" between each successively stronger bonds, and are there just for easier reference.

With that in mind, let's look at the options again, and count how many of each type of bond are broken and formed:

Ozone has a resonance structure, which means that we need to consider the bonds as being somewhere between a single and double bond in strength. We could imagine them being about halfway up step 2.

So we are looking at an overall reaction that would be slightly more endothermic than the breaking of a single bond. To make that easier to see, think about taking these energetic "steps" using the figure above:

Here we are breaking two sets of resonance bonds, but forming 3 double bonds. So our steps look like:

There are three -1, -2 steps, each of which is larger than a +1.5 step. However, they are not much larger, and the total of the difference may or may not be greater than the fourth 1.5 step. This means we can't say for sure whether it is exo- or endo-thermic, but we can at least say it would be less endothermic than breaking a single bond.

Here we are breaking a double bond, and forming nothing. This is the clear winner so far, with steps +1, +2.

In the final case, we break two resonance bonds, and form two double bonds. Our steps are:

Since the formation of each double bond releases more energy than the dissociation of each resonance bond, this is clearly exothermic, as you stated in your question.

Taking all of this together, we have to choose (d) as the correct answer.

Not the answer you're looking for? Browse other questions tagged bond enthalpy or ask your own question.

4
Why does the stratosphere have a lot of ozone, but not the Earth's surface?

1
Enthalpy change of reaction
4
How is the charge of covalently bonded atoms determined?
16
Enthalpy of formation and reaction equations
2
Finding change in enthalpy for a reaction with an atom in elemental state using bond energy
0
Calculating bond energy given the enthalpy value of burning reaction