Help understanding the synthesis of HOCl

My goal is to add acetic acid to sodium hypochlorite to reach a ph of between 3.8-5.5 and produce hypochlorous acid. I’ll be using bromocresol green as a ph indicator. I was reading about how to synthesize it from an article here by the acidification of hypochlorite, which was noted to be the safest and most controlled way. My initial question was how do I calculate how much acid is needed to reach the specified pH range. However, other users noted that this may dangerously produce chlorine gas, in which case this experiment should be executed under a fume hood with care and proper safety precautions.

Figure 2 from the article notes the production of various byproducts of the reaction at different pH levels. It appears that chlorine gas is produced at both low pH and at high pH, but it is a bit confusing since it is overlapping with another line making it hard to understand. 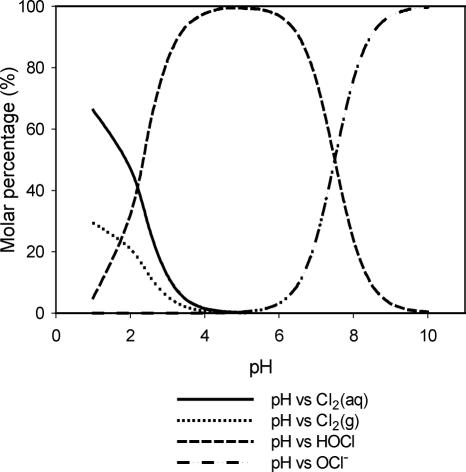 Ideally, I'd like to reduce any production of Cl$_2$. Is there a way to do that? Anything to help me better understand this reaction is appreciated.

I don't understand why this question was so poorly received and closed. It clearly lies within the allowed topics listed in the help center. Even though my question was about a potentially dangerous experiment, it is an important one nonetheless. I was able to learn an important detail concerning the safety of the experiment from this post. If anyone else was to follow down the same path as me, they should be able to google about it, see this question, and learn of the safety concerns as well. I think this question should be reopened to educate people instead of being heavily downvoted because OP is an inexperienced chemist trying a dangerous experiment, because that is not the case.

Chlorine is somewhat soluble in water: 14.6 g/100 mL H2O at 0 C, but drops to 0.57 g/100 mL at 30 C. So one way to reduce exposure to Cl2 would be to keep the temperature low and the volume adequate (dilution) to maintain all the chlorine in solution, with a little more volume for safety. There will still be chlorine escape, but this can be minimized by keeping the reaction container fairly well covered or sealed.

A separate issue is safety. It is always good to prepare safety precautions, and wise to imagine a worst-case scenario - like spilling the entire container, or breaking it. Precautions would include more ventilation that you think you will need, rags to wipe up a possible spill; plastic bags to quickly contain the rags. And, of course, smaller quantities to begin with, to make sure that no unexpected reaction occurs.

But a little chlorine is not so evil that it will seep out and destroy you. And the whole point of chemistry is to react things, so being perfectly safe and not mixing things together is sound advice for the non-chemist, but falls on deaf ears for a chemist.

Chlorine bleach is commonly produced via the chloralkali process as a highly alkaline mixture of sodium hypochlorite (NaOCl) and hydroxide (NaOH) along with some unreacted NaCl as well.

0
What does 0.12 N mean on a bottle of sulfuric acid?
15
Does bleach (without rinsing) leave residues and can vinegar, baking soda neutralize them?
5
Litmus paper - turning red, blue and even bleached
5
Balancing complex haloform redox reaction
4
One half of a nail is exposed to vinegar. Un-exposed half develops a brown film. What is it?
1
What is happening to my chlorine dioxide when I add too much bleach or citric acid?
3
Maximum possible hypochlorite concentration from electrolysis?
0
How to determine the product from my attempt of HOCl synthesis