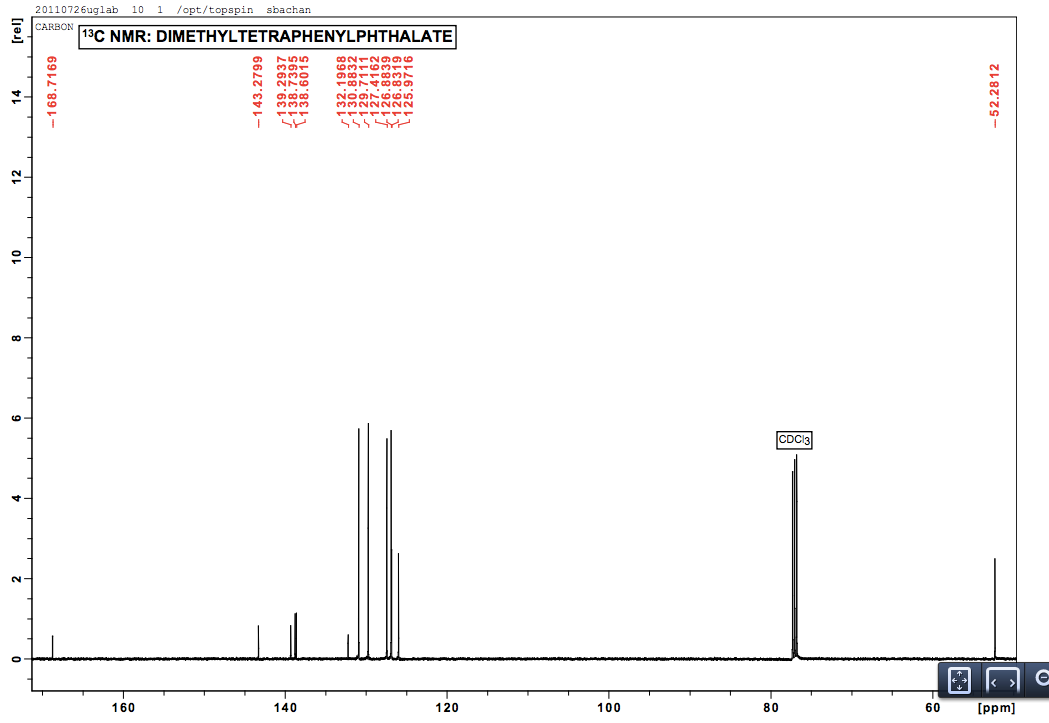 I am trying to assign the peaks here to dimethylphenylphatalate but all the benzene rings are throwing me off. All I can get is that the further most signal is the carbonyl carbon (168.71) and the one prior to that (143.27) might be the ester carbon (from the methyl). Can someone help?

Here's a numbered drawing of the title compound to help us keep track of things. First thing we notice is that there are 13 different carbon atoms in the structure and we see 13 signals in the spectrum, that's a good start. 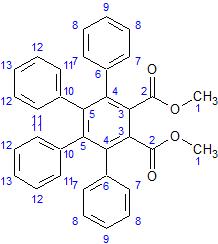 In the region for aromatic carbons we see 5 low intensity peaks between 143 and 132. These belong to the (unprotonated) quaternary carbons 3, 4, 5, 6, 10. Using diethyl phthalate as a model compound, I would guess that the peak at 132.19 is from C3. The two peaks at 138.73 and 138.60 have the same height and are closely spaced suggesting very similar environments, I might guess them to be C6 and C10, just not sure which is which. Noting that the peak for the carbon corresponding to our C5 is downfield of the peak corresponding to our C4 in the model compound, I would expect the same trend to hold here, just with each of the peaks shifted downfield due to attachment of a phenyl group. So I would assign the peak at 143.27 to C5 and the peak at 139.29 to C4.

This leaves the protonated aromatic carbons for us to consider. The 2 peaks at 125.97 and 126.83 are half the intensity of the other protonated aromatic signals, therefor assign them to C9 and C13 as there are only half as many of these carbons as compared to the other protonated aromatic carbons. It's not clear which peak belongs to C9 and which to C13. This leaves us with the 4 signals due to C7, C8, C11 and C12. Using the same resonance structure - delocalization arguments I made in your benzaldehyde cnmr question from yesterday, I would expect C7 and C11 to be downfield from C8 and C12. Therefor, I would assign C7 and C11 to the peaks at 129.71 and 130.88, not knowing which is which. C8 and C12 then belong to the signals at 126.88 and 127.41, not knowing which belongs to which.

Obviously there is some guess work in here and if it was an important project I'd do some further experiments and look for some additional model compounds in order to confirm these assignments and remove the discrepancies, but this is a good start.

Not the answer you're looking for? Browse other questions tagged organic-chemistry spectroscopy analytical-chemistry nmr-spectroscopy or ask your own question.

5
Why is the para carbon in Benzaldehyde NMR more deshielded than the ortho and meta carbons?