Trend in atomic volume across a period [closed]

"Atomic volume decreases along a period, reaches a minimum at the middle, and then increases for the rest of the period"

Why does the atomic volume, along a period, initially decrease, reach a minimum and then increase? 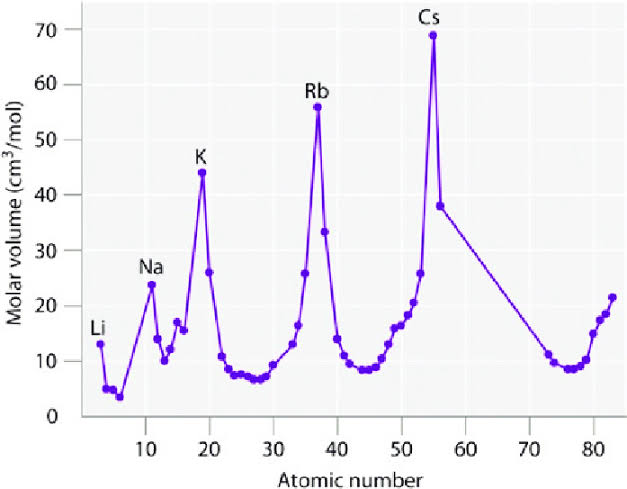 Firstly, we need to clearly define "atomic volume" and "molar volume". Typically, one would understand "atomic volume" to be the volume of an atom of the element and it is directly related to the radius of the atom. Molar volume is a macroscopic property that is defined by Wikipedia as the ratio of the molar mass to the mass density of the substance at a certain temperature and pressure. As such, molar volume would not only be dependent on atomic radius but would also depend on the structure and bonding of the atoms.

With this understanding, it is easier to explain the trend that you have provided. The molar masses of the group 1 metals are considerably large but yet they have a relatively low mass density. As such, they are seen as spikes in the graph, with the highest molar volumes in their respective periods. Mass density generally increases from group 1 to group 13 resulting in the fall in molar volume across the period initially while for the transition metals, they stay roughly constant and take relatively large values. However, once we reach the non-metals, the trend seems to reverse. The density values for the non-metals seem to display some variability so I am not sure how the their molar volume trend can be explained. Obviously, their molar volume would be higher than that of the transition metals that come before them as those are significantly more dense.

Not the answer you're looking for? Browse other questions tagged atoms periodic-trends or ask your own question.

1
Why is periodicity seen in these certain properties?
3
Which of the following statements is true about the trend down group 7?
3
Regular decrease in the atomic radius of 3d series
6
Boiling point trend in group 13
1
Why does hydride acidity increase across period and down group in periodic table?
2
Why does the ionization enthalpy of elements across a period not follow a regular pattern while the atomic size always decreases?