Recently a post appeared on ChemSE asking why cyclohexane-1,3-dione (dihydroresorcinol) 1a doesn’t give a positive iodoform test. Unfortunately, the post was subsequently taken down after several comments. A paper by Fuson and Bull[1] reviewed the haloform reaction and stated that the iodoform test was negative for 1a. However, dihydroresorcinol undergoes the bromoform reaction[2] to yield both glutaric acid 9a and bromoform 7 as does 5,5-dimethylcyclohexane-1,3-dione (dimedone)[3] 1b yield β,β-dimethyl glutaric acid 9b and bromoform. Moreover, dimedone 1b affords the same diacid 9b and chloroform when sodium hypochlorite is employed.[4]

Mechanistically, dibromination of 1,3-diones 1 affords dibromides 2, non-enolic β-diketones. In alkaline medium diketones 2 cleave to provide dibromides 4 via intermediate 3. Further bromination of dibromides 4 sets the stage for the bromoform reaction on 5 leading to bromoform 7 and the glutaric acids 9. 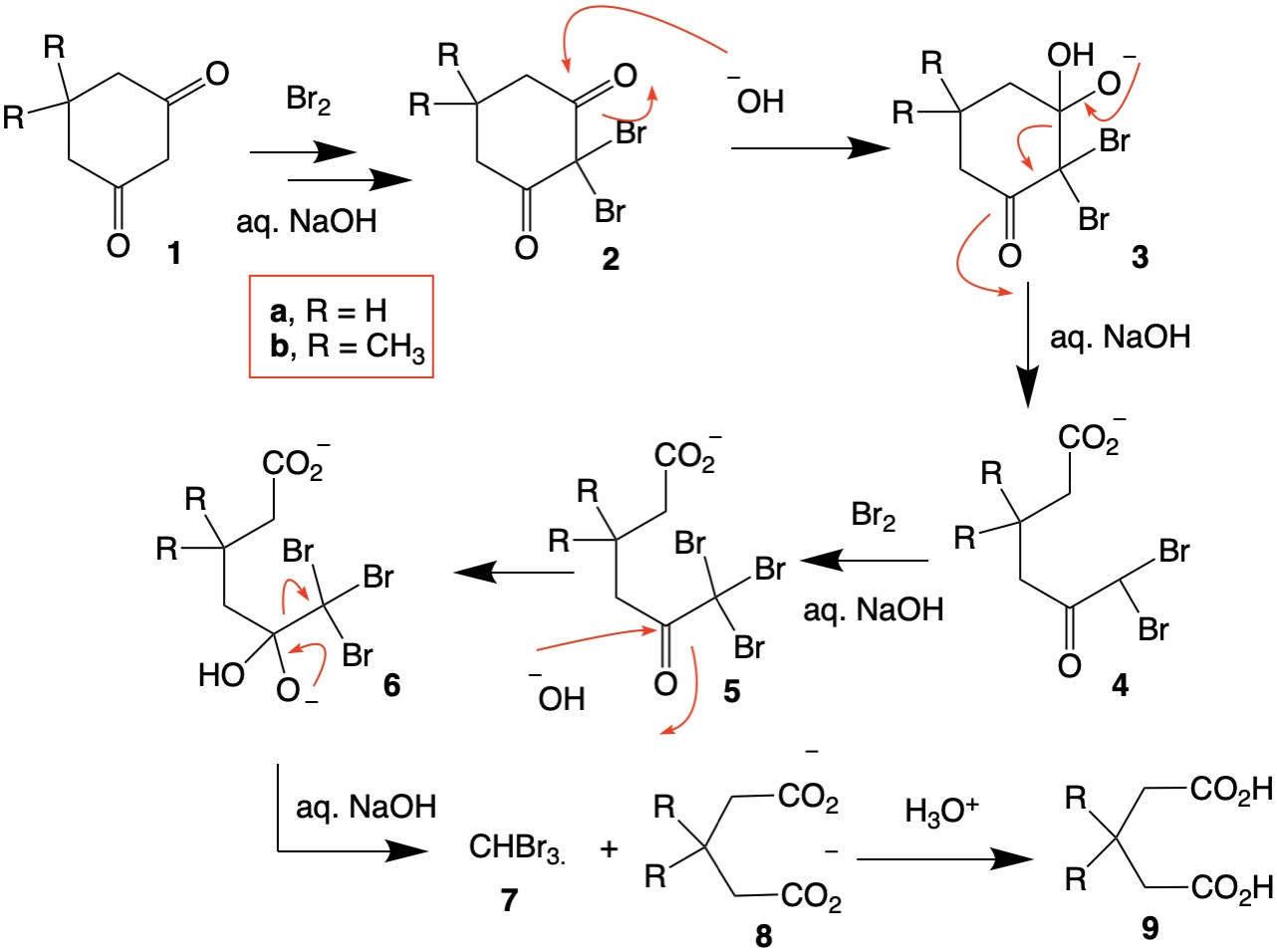 a) It is unimaginable that the reaction has never been conducted.
b) Perhaps more vigorous conditions are required.
c) The diiodo analog of dihalo diketone 2, if ever formed, may be formed reversibly by iodide or hydroxide reduction. Even so, the equilibrium should be shifted to the right.
d) If the diiodide is slow to fragment, might it undergo a Favorskii ring contraction instead?

Any insights are appreciated.

Browse other questions tagged organic-chemistry reaction-mechanism or ask your own question.

19
Does resorcinol give positive iodoform test?
18
Are compounds containing active methylene groups positive for the haloform test?
10
Why does formic acid give positive Fehling's test?
4
Why cyclohexane-1,4-dicarbaldehyde does not give aldol condensation?
2
Does 4-methylbenzaldehyde give haloform and aldol reactions?
1
Does acetoacetic ester give haloform test?
4
Is cyclohexane‐1,3‐dicarboxylic acid a correct IUPAC name?
3
Why do resorcinol and iodine react to give 2-iodobenzen-1,3-diol?