Sorry for the long worded question, yea I'm just conceptually looking for how these MOs form.

Let's stay with your example of benzene, $\ce{C6H6}$. There are six carbon atoms bound in cyclic fashion with each other, and maintain each one bond to a hydrogen atom, too. This is explained conceptually that for each carbon atom the outmost $s$ and three $p$ atom orbitals were hybridized to yield three $sp^2$ of equal energy, leaving one $p_z$ orbital «unaffected».

An useful tool to sort these molecular $\pi$-orbitals is the Musulin Frost cycle. Draw the benzene as a regular hexagon with a tip to the bottom. Either keep in mind, or mark the corners as atoms, too: 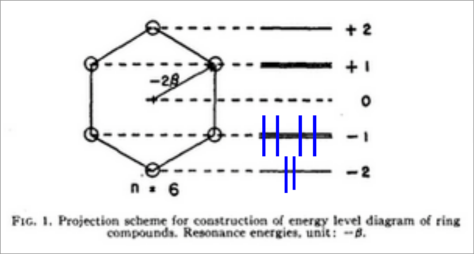 As you see, energy wise, $\pi_2$ and $\pi_3$ are degenerate but (as $\pi_1$ as well) below the level of the atom orbitals we started (the sketch symbolized this by 0). The antibonding $\pi$ orbitals are higher than this level. Again, there are two ($\pi^*_4, \pi^*_5$) which are degenerate because of the symmetry in benzene. And you may fill the orbitals one by one, schematically by the added blue lines. This representation equally helps you to identify HOMO and LUMO levels accessed, e.g. by UV-Vis spectroscopy.

As shown in the example below, it equally allows you to understand the energetic difference between cyclopropyl cation and anion, too: 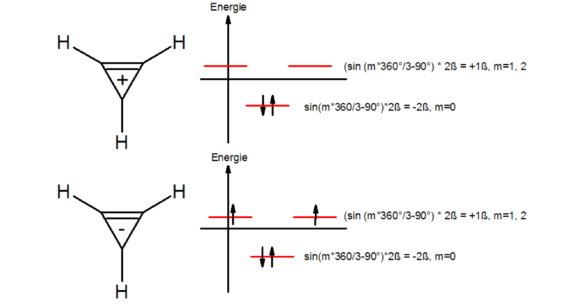 As for the name (cycle): It may be easier to draw a cycle around the (cyclic) molecule in question with a centre at an energy level = 0 as in the example below and to quantify the energy differences, too:

Not the answer you're looking for? Browse other questions tagged physical-chemistry aromatic-compounds orbitals or ask your own question.

6
Bonding and Antibonding
10
LCAO (Linear Combination of Atomic Orbitals) and Phases
10
How do Electrons Cross Nodes in Orbitals?
3
Molecular orbital theory and the conservation of molecular orbitals
3
What are the physical manifestations of radial nodes?
8
Significance of phase of atomic orbitals
3
The molecular orbitals of lithium hydride