This is from one of the practice papers for the JEE , asks for possible hydrolysis products of (chloromethyl)cyclopropane .

Product A happens to be due to stability of cyclopropyl methyl carbocation.

Pathway for C doesn't seem to be anywhere in my books , I tried googling it but found nothing.

So, is but-3-en-1-ol a possible product of hydrolysis of (chloromethyl)cyclopropane?

I'd say, yes it is possible. The pioneering work on interconversion reactions of cyclobutyl, cyclopropylcarbinyl, and allylcarbinyl derivatives has been done by John D. Roberts and coworkers (Ref.1). In these works, they have checked reactions under both $\mathrm{S_N1}$ and $\mathrm{S_N2}$ conditions. They have observed the reactions expected to involve carbonium ion intermediates have shown interconversion, which have been correlated to factors such as carbonium ion stability, ease of interconversion, and stability of possible products. One such interconversion have been shown in the reaction of cyclopropylcarbinyl-, cyclobutyl-, and allylcarbinylamines with nitrous acid, which gave relevant carbonium ions. Similar approach was recently taken by Arca, et al. 2014 using solid catalysts (Ref.2). They have proposed a bicyclobutonium cation transition state to explain the product formation: 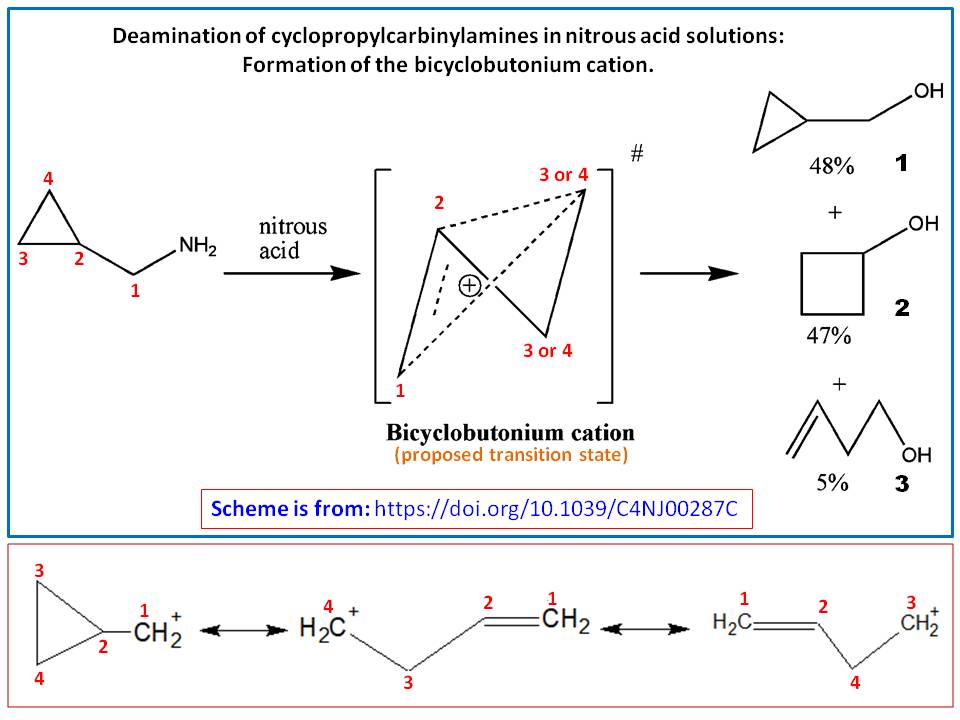 The coorelation to liquid phase reaction is well explanied in their abstract:

Rearrangement of cyclopropylcarbinyl bromide over proton and ammonium-exchanged mordenite ($\ce{H}$-MOR and $\ce{NH4}$-MOR) was studied at different temperatures. The product distribution analysis revealed a similar profile to what is found in solution, with prevalence of cyclobutyl over allylcarbinyl bromide. The activation parameters showed that compared with 80% aqueous ethanol solution, the zeolites present lower enthalpy of activation and higher entropy of activation, but yielding a significantly lower $\Delta G^‡_{298}$. The results may be explained in terms of the ability of zeolites to serve as solid solvents, providing a polar nanoenvironment for ionic reactions to occur.

Therefore, we can assume the reaction in hand have also unedergone with similar mechanism, giving same three products, $\bf{1}$, $\bf{2}$, and $\bf{3}$ (probably in different ratios). The formation of $\bf{3}$ can also explained by the possible resonance contribution as depicted in above $\color{red}{\text{Red Box}}$. Note that two open resonance structures are essentially the same, but shown because it would make a double contribution due to the symmetry.

It's noteworthy that the open-chain derivatives have been achieved from the reaction of cyclopropylcarbinyl halides with amines (Ref.3).

Not the answer you're looking for? Browse other questions tagged organic-chemistry reaction-mechanism nucleophilic-substitution hydrolysis rearrangements or ask your own question.

43
What is the reason for the exceptional stability of the cyclopropylmethyl carbocation?

4
Hydrolysis of cyanohydrin
10
Can a six member ring expand to achieve octet completion to stabilize a carbocation?
0
Is 1,3 alkyl shift allowed in Cyclobutyldicyclopropylmethyl Cation?
9
Effect of substituents on arene oxide-phenol rearrangement
3
Is the elimination reaction between 1 1 dibromo cyclopropane and phenyl lithium feasible in alkaline medium (and some heat)
1
Acid catalysed dehydration of alcohol with a bicyclo group
12
Mechanism for the addition of hydrogen iodide to 3,3‐dimethylbut‐1‐yne