What reagents change the time of a chemical clock?

I am doing a research task involving an iodine chemical clock reaction. I need to figure out which reagents in the experiment are responsible for changing the time before the colour change in the clock. The current method (see image attached) shows the quantity of materials required for a ~2 minute iodine clock. For this research task, we are required to find the quantity of materials necessary for a ~10 minute iodine clock. Can you please clarify which reagents cause the increase/decrease in time of the chemical clock reaction? 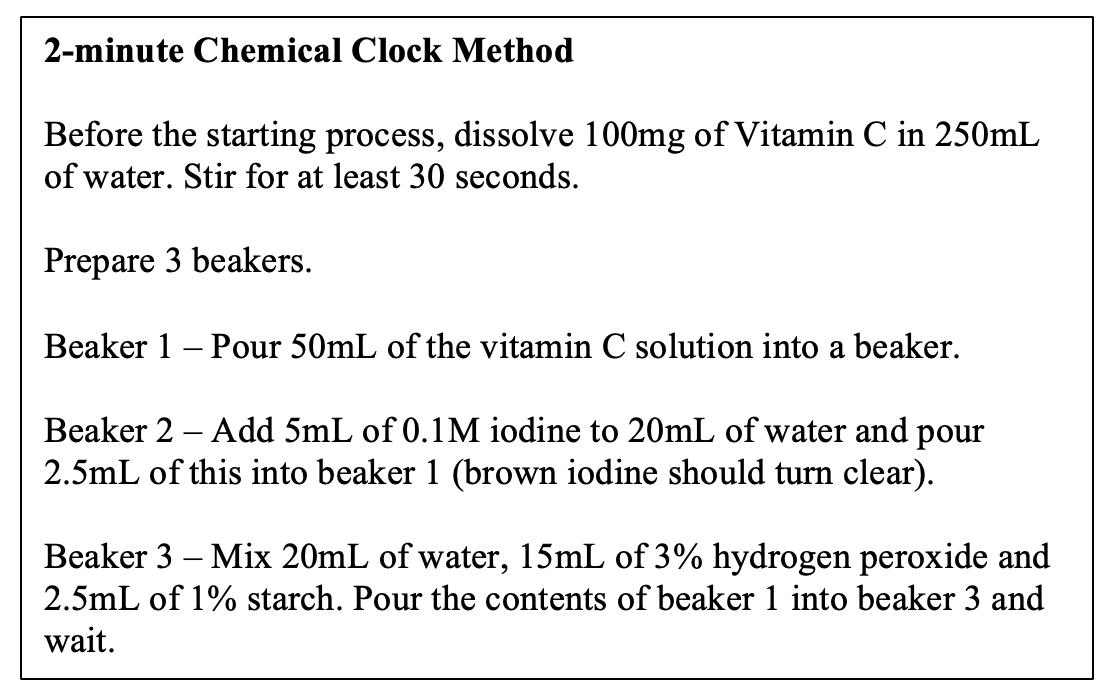 First, a review of the underlying chemistry per an educational source:

A clock can be formed from molecules that react at a rate from the time the chemicals are mixed to the time the reaction occurs.

Explanation: There are two forms of iodine:

There are two reactions taking place simultaneously in the solution:

In Reaction # 1 iodide ions react with hydrogen peroxide to produce iodine element which is blue in the presence of starch. BUT, BUT......

In Reaction # 2 The Vitamin C is immediately reacting with any iodine formed in reaction # 1. The net result, at least for part of the time is that the solution remains colorless with excess of iodide ions being present.

Now after a short time as the reactions keep proceeding in this fashion, the Vitamin C gets gradually used up. The Vitamin C creates a clock reaction (1 - 2 minutes) and once it is used up, the solution turns blue, because now the iodine element and starch are present.

So, to answer the question: "which reagents in the experiment are responsible for changing the time before the colour change in the clock", the answer is H2O2 and Vitamin C. Now, while the rate-controlling step, associated with the slowest reaction is H2O2 (creating the colourful I2 highlighted by starch), some Ascorbic acid must be present to turn the solution clear again.

On the question:"Can you please clarify which reagents cause the increase/decrease in time of the chemical clock reaction?", the strength of the H2O2 (try changing from 3% to 10%) and the pH of the hydrogen peroxide (try adding alkaline Washing Soda Na2CO3 to the H2O2), both I would likely expect to have impacts on the Vitamin Clock timing.

Not the answer you're looking for? Browse other questions tagged reaction-mechanism experimental-chemistry or ask your own question.