I read in my book that we cannot use pyridinium chlorochromate (PCC). Why is that?

There are indeed examples of $\mathrm{PCC}$ oxidation of allylic alcohols to $\alpha, \beta$-unsaturated aldehydes. The first example is from the original Corey-Suggs paper while the other two cases are from the work of Dauben and Michno. 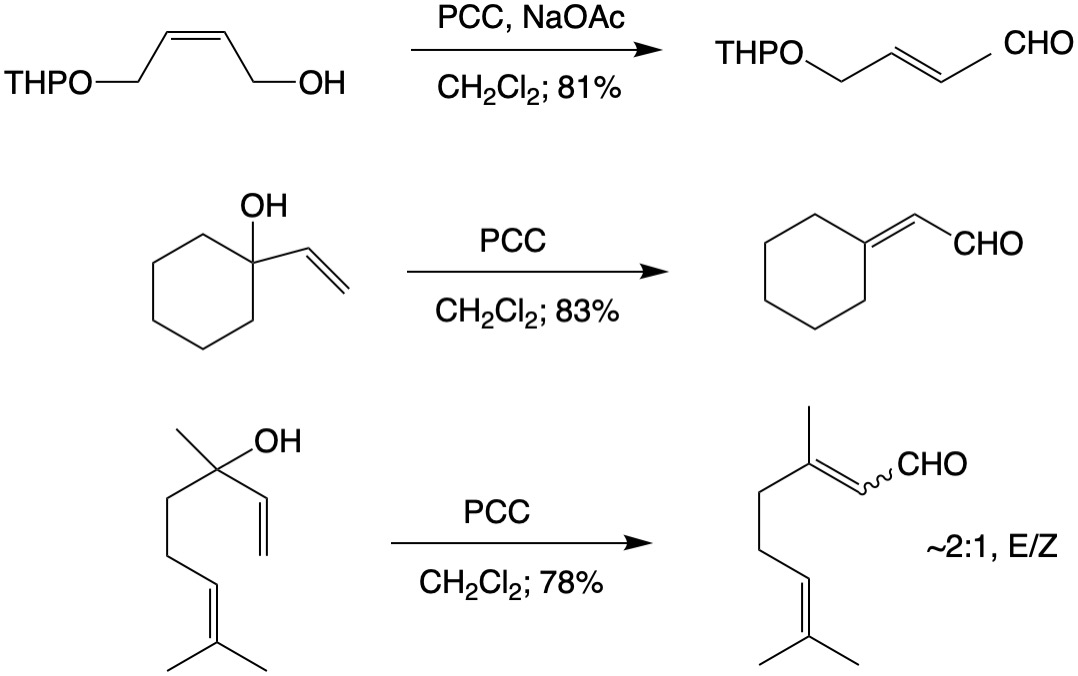 The question did not specify what kind of allylic alcohol OP is talking about. It could be either a primary, or secondary, or tertiary allylic alcohol (didn't cite the book so we don't know for sure). Regardless, pyridinium chlorochromate $(\mathrm{PCC})$ has been used to oxidize tertiary allylic alcohols. However, in these reactions, the newly formed carbonyl group is at carbon $\beta$ to hydroxyl bearing carbon (original allylic carbon. For example, tertiary allylic alcohols generated by Grignard reaction of vinylmagnesium bromide with relevant saturated ketones can be oxidized to the corresponding $\alpha,\beta$-unsaturared aldehydes in good to excellent yields with $\mathrm{PCC}$ (Ref.1):

However, before these discoveries on tertiary allylic alcohols, J. R. Holum (1961; Ref.2) has studied thoroughly on chromium(IV) oxide-pyridine complex $\ce{CrO3.2C5H5N}$ (first synthesis of pyridinium complexes, Ref.3). The abstract of that study (Ref.2) states that:

The chromium(IV) oxide-pyridine complex was found to be a good oxidizing agent at room temperature for the conversion of primary benzylic and allylic alcohols to their corresponding aldehydes. Data for twenty-one compounds are presented. Simple aliphatic and aromatic secondary alcohols are converted to ketones in fair to good yields; data for six are presented.

Thus, it can be concluded that what OP's textbook said about $\mathrm{PCC}$ and allylic alcohols might not exactly be correct.

In different perspective, $\mathrm{PCC}$ has been shown to be of particular value in the allylic oxidation of compounds containing an activated methylene group, such as 2,6-dihydropyrans. Indeed, it has been claimed that $\mathrm{PCC}$ is the reagent of choice in the allylic oxidation of $\Delta^5$-steroids. For example, when the reaction of $\Delta^5$-cholestoryl benzoate ($\bf{1c}$, Figure $\bf{A}$) with $\mathrm{PCC}$ is carried out in refluxing benzene, the isolated yield of $\bf{2c}$ was 89% while it was 78% when the reaction was performed in $\mathrm{DMSO}$ at $\ce{100 ^\circ C}$. In contrast, if the condition was pyridinium dichromate $(\mathrm{PDC})$ in pyridine at $\ce{100 ^\circ C}$, the yield was only 64% (Ref.4). In addition, these solvent systems are claimed to be superior to the more usual methylene chloride $(\ce{CH2Cl2})$. The biggest drawback of this system, the requirement of large excess of oxidizing reagent, has been successfully solved by using t-buyl hydroperoxide-$\mathrm{PDC}$ $(\ce{t-BuOOH}/\mathrm{PDC})$ mixture as an oxidant (Figure $\bf{B}$; Ref.5). However, $\ce{t-BuOOH}/\mathrm{PCC}$ system is found to be as not efficient as $\ce{t-BuOOH}/\mathrm{PDC}$ system. A low conversion was obtained using $\mathrm{PCC}$ catalyst has claimed to be due to the fact that $\mathrm{PCC}$ having a mildly acidic character (Ref.6). 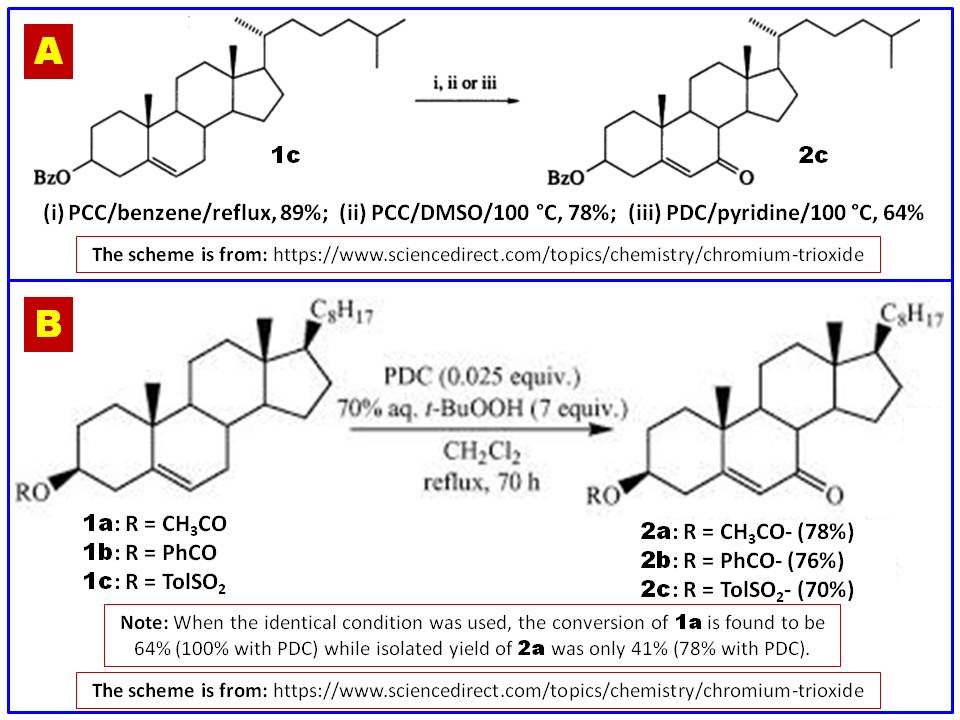 Not the answer you're looking for? Browse other questions tagged organic-chemistry organic-oxidation or ask your own question.

0
Reaction of a cyclic tertiary alcohol with chromic acid

4
What route to take in converting ethanol to crotonic acid?
4
Can toluene be oxidized to benzoic acid using Pyridinium Chlorochromate(PCC)?
2
Why is pyridinium chlorochromate selective compared to chromate, dichromate etc.?
2
How does PCC not oxidize aldehyde?
9
Why can't I dry/concentrate ethanol using calcium chloride ... or can I?
1
Can methanol be oxidised by PCC?
1
Usage of TFA in Pfitzner-Moffat oxidation and Collins vs Jones oxidation
2
Why is Pyridinium Chlorochromate soluble in organic solvents?