I am reading Ostwald Theory of Titration which says that indicators are organic weak acids or bases. To prove the relation that $\mathrm{p}K_\mathrm{In} = \mathrm{pH}$, the textbook uses the following equilibrium as an example:

which of course produces the the required result, but a thing I noted that it was for acid type indicator, so I decided to fill in the gap and do it for base type indicator myself, but it did not proceed as imagined:

Consider a weak organic base indicator $\ce{InOH}$, for it, the equilibrium will be:

and it's equilibrium constant then would be:

which inturn implies that,

which doesn't seem to match with the previous result! Am I missing something here?

Note: I doubt that the condition $[\ce{In^+}] = [\ce{InOH}]$ might be the trouble, but I think it shouldn't be as in theory, the different color arises due to the respective indicator and their respective conjugate acid or bases.

It is true that acid-base indicators ($\mathrm{pH}$-indicators) are either weak acid or weak base. What I understood reading your question is that you have wrong impression about bases. To clear your view, not all bases contain $\ce{OH-}$ ions. Specially, most organic bases are weak and contain electronegative ion (e.g., $\ce{N}$ or $\ce{O}$) with at least one lone pair. This fact is well cleared by Poutnik's answer, thus, I'm not going to elaborate it more. Instead, I'd like to explain the action of a $\mathrm{pH}$-indicator (e.g., $\ce{HIn}$ in acidic form) to some depth.

Since Indicators ($\ce{HIn}$) are weak acids (or weak bases), in aqueous medium, it's in an equilibrium: 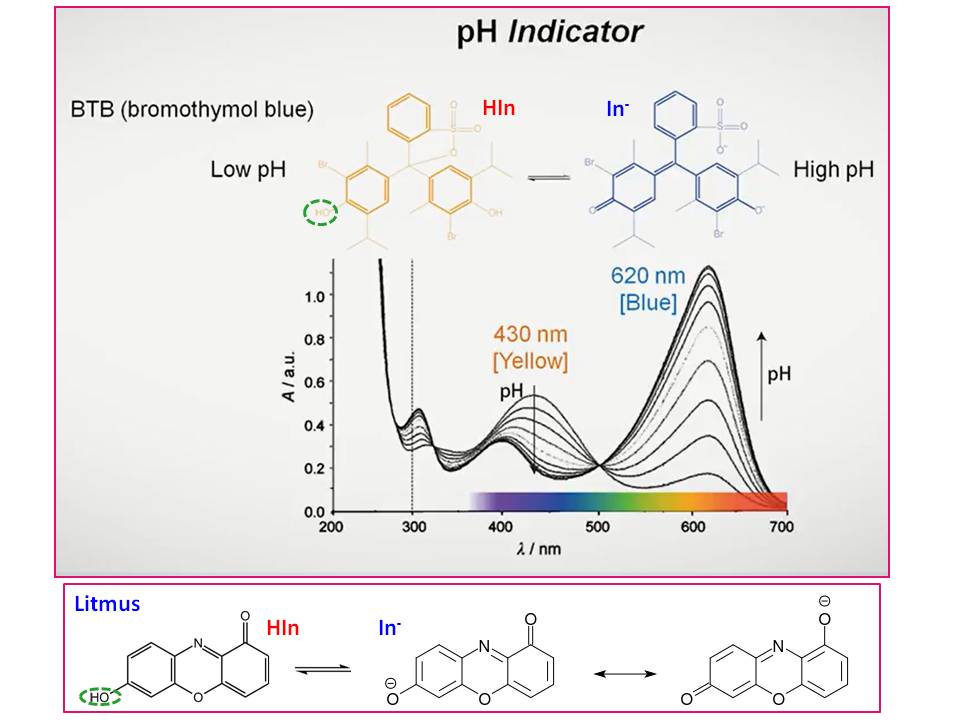 Let's see litmus in basic solution where $\ce{In-}$ ions are predominant ($\color{blue}{\text{blue}}$ solution). Now you start adding acid to the solution and you can see what would happen to the solution (equation $(1)$) by using Le Chatelier's Principle. Since excess hydronium ions disturb the equilibrium, it'd shift to left hand side of equilibrium to reduce excess hydronium ions by reacting $\ce{In-}$ ions. Eventually, solution changes the color to $\color{red}{\text{red}}$. Opposite would happens if you added hydroxide ions to the $\color{red}{\text{red solution}}$ in equilibrium.

The scaning UV spectra in the upper box of the diagram shows how color change happens in solution with $\mathrm{pH}$. The indicator here is bromothymol blue, which is yellow in the acidic medium absorbing light at about $\pu{430 nm}$. When $\mathrm{pH}$ has changed systematically with time (by adding known aliquot of $\ce{OH-}$ solution with in fixed time), the solution changed the color accordingly, and bromothymol blue has changed to its basic color blue, absorbing light at about $\pu{620 nm}$. Note that the peak at $\pu{430 nm}$ decreases while the peak at $\pu{620 nm}$ increases while $\mathrm{pH}$ increases.

A basic indicator is usually a Broensted-Lawry base ( accepting protons ) rather than Arrhenius base ( releasing hydroxide ions ):

depending on if the indicator is used in its base form or conjugate acid form (the latter is usually more stable and more soluble).

where $K_\mathrm{a}$ is the acidity constant of the conjugate acid.

Not the answer you're looking for? Browse other questions tagged inorganic-chemistry equilibrium ph titration or ask your own question.

6
What is the pKa Range for weak acids and bases?
5
The significance of the dissociation constant of an indicator
0
Determining the nature of common pH indicators (methyl orange) using Le Chatlier's principle
3
Phenolphthalein as a indicator for the titration of benzoic acid
0
Would the End Point and Equivalence Point be Labelled the Same?
0
Effects of Ka on the Half-Equivalence Point
0
Dissociation constant for Indicators
3
What is the pH of the universal indicator?