Newman projections: how to tell which groups are bulkiest to determine what is the most stable conformation?

Let's say we have a molecule where in the Newman projection the front carbon has a hydrogen, methyl and an ethyl, and in the back carbon there's a hydrogen, something like a S, Cl or Br (bigger than carbon but only one atom), and something like another ethyl or isopropyl: 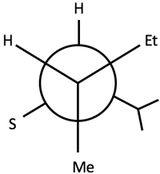 Methyls/ethyls/isopropyls etc. would cause more steric hindrance than something like S, Cl or Br because they consist of multiple atoms and take up more space, so in the scenario above, the front carbon's ethyl should be 180° away from the back carbon's ethyl/isopropyl, and the S/Cl/Br's position would be dependent on the ethyl from rotation. I think the following should be the most stable conformation: 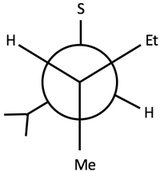 I've seen some similar examples where (in the same type of scenario) the S/Cl/Br was considered "bulkier" and was put 180° away from a big isopropyl, when something like an ethyl could have been there instead, but was put only 60° away from the big isopropyl (see the first illustration). I'm not sure if these examples were just wrong or if I'm completely misunderstanding how to determine what's bulkiest, so any advice on how to determine that would be super. If a table that ranks most-to-least bulkiest exists, please share.

organic-chemistry stability conformers
Share
Improve this question
edited May 31, 2020 at 7:02

Well, I think your book is wrong. Read the extract:

A-Values are numerical values used in the determination of the most stable orientation of atoms in a molecule (conformational analysis), as well as a general representation of steric bulk. The utility of A-values can be generalized for use outside of cyclohexane conformations. A-values can help predict the steric effect of a substituent. In general, the larger a substituent's A-value, the larger the steric effect of that substituent. A methyl group has an A-value of 1.74 while tert-butyl group has an A-value of ~5. Because the A-value of tert-butyl is higher, tert-butyl has a larger steric effect than methyl. This difference in steric effects can be used to help predict reactivity in chemical reactions.

I guess what you're looking for are A-values. The higher the A-value, the more "bulky" the group is considered. 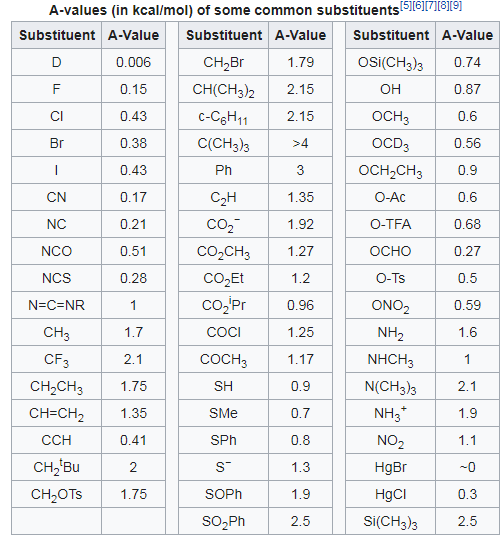