I found this image on wikipedia: 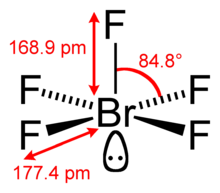 It got me wondering why the axial bond angles were shorter than the equatorial ones. I found this extract elsewhere on the internet -

For $AX_{5}E$ molecules which have a square pyramidal shape the extra repulsion exerted by the lone pair would be expected to cause the neighboring four bonds, i.e., those at the base of the square pyramid to be slightly longer than the fifth bond to the apex. Experimental evidence on molecules of this type is scanty (5). The four square-planar bonds are longer than the single bond to the apex in $SbCl_{5}^{2-}$ but they appear to be shorter in $SbF_{5}^{2-}$.

Now, given that the paper is pretty old, I was wondering if there has been any new evidence collected on this subject. I essentially would like to understand why the bond length of BrF5 follows this order, and why it isn't followed by $SbF_{5}^{2-}$. I'd appreciate some references as well for evidence and perhaps other researched examples.

Note: This isn't a duplicate of this, since that question doesn't address the deviation in $SbF_{5}^{2-}$.

Browse other questions tagged inorganic-chemistry hybridization vsepr-theory or ask your own question.

3
Why do square pyramidal molecules have only two vertical mirror planes?
7
Are bridge bonds in diborane longer than the terminal H bonds?
3
Reason for shorter bond between sulphur and oxygen?
3
Comparing bond angles in carbonyl dichloride and carbonyl dibromide