If both a ketone and an alkene are present in a molecule and you add one equivalent of m-CPBA, what are the factors that determine which group will be oxidized, the ketone through Baeyer-Villiger oxidation or the alkene through concerted epoxidation? Is one of the reactions particularly faster and better than the other?

EDIT: Since the literature seems to be conflicted and there is not a clear general answer, let us take the below as an example because I am interested in the competing factors here. For this example, I am leaning towards epoxidation just due to electron-rich alkene, and there is no base to make m-CPBA a better nucleophile for BV.

The answer appears to be "it depends" (perhaps this should not surprise an experienced organic chemist).

According to the abstract of the paper by Mendelovici and Glotter [1] in steroid chemistry:

Treatment of 3β- and 3α-hydroxy-(acetoxy-)cholest-4-en-6-one and of 6β-and 6α-hydroxy-(acetoxy-)cholest-4-en-3-one with MCPBA gives two types of product, depending on the initial site of the peroxy acid attack. Attack at the carbonyl group gives a Baeyer–Villiger rearrangement leading first to enol lactones and then by epoxidation of the latter to epoxy lactones. Alternatively, attack at the double bond gives epoxy ketones which can subsequently undergo a Baeyer–Villiger rearrangement leading to epoxy lactones. With one exception (3α-hydroxycholest-4-en-6-one), the Baeyer–Villiger oxidation of the enone is the dominant process. Epoxidation of the double bond is suppressed in the presence of an axial 3α- or 6β-acetoxy group.

However, Kazmeier and Horn [2] working with unsaturated aldehydes find

Purified m CPBA is a useful reagent for the oxidation of several classes of aldehyde. Although linear unbranched aliphatic aldehydes are oxidized to the corresponding carboxylic acids, α‐branched ones undergo Baeyer–Villiger oxidation to formates. α‐Branched α,β‐unsaturated aldehydes provide enolformates and/or epoxides, which can be saponified to α‐hydroxy ketones with shortening of the carbon chain by 1 carbon. Unbranched α,β‐unsaturated aldehydes undergo an interesting Baeyer–Villiger oxidation/epoxidation/formate migration/BV oxidation cascade, which results in formyl‐protected hydrates with an overall loss of two carbon atoms.

Overall it appears that both processes can occur so Murphy's Law applies. It would be a good idea to explore alternative epoxidation conditions for an unsaturated ketone.

The selective Baeyer-Villiger Oxidation of unsaturated ketones is definitely depends on the conditions used. I do not want to eloborate this fact any further because it was well documented in Waylander's answer. Howevr, so far into the literature suggest that use of peracids in presence of unsaturation in the substrate ketone is not a good idea. The quote "Attack at the carbonyl group gives a Baeyer–Villiger rearrangement leading first to enol lactones and then by epoxidation of the latter to epoxy lactones" clearly suggests Baeyer-Villiger Oxidation predominates under the condition, but the following epoxidation cannot be avoided. How ever, recent literature suggest that use of suitable catalyst may stop the reaction at lactome formation, avoiding the forthcoming epoxidation.

$\ce{Sn}$-doped zeolite beta can be used in stopping side reactions after Baeyer-Villiger Oxidation (Ref.1 and Ref.2). The use of solid acids such as zeolites as selective catalyst has benefited to avoid use of peracids as the oxidant (the traditionally used oxidant), and replacing it with cheaper and less polluting hydrogen peroxide ($\ce{H2O2}$). The major problem with the traditional conditions of Baeyer-Villiger Oxidation is their lack of sufficient selectivity for the desired product if the starting material contains functional groups other than the ketone group. This shortcoming is well met with use of zeolite beta after incorporation of 1.6 weight per cent tin into its framework as the catalyst of choice (Ref.1). This $\ce{Sn}$-doped zeolite beta acts as an efficient and stable heterogeneous catalyst for the Baeyer-Villiger oxidation of saturated as well as unsaturated ketones by $\ce{H2O2}$, with the desired lactones (e.g., vinyl ester) forming more than 98% of the reaction products (Ref.1).

Seemingly, $\ce{H2O2}$ is the choice of oxidant to avoid further oxidation of double bond. Zhang et al. have used organoselenium catalyst with $\ce{H2O2}$ to perform Baeyer-Villiger Oxidation on $\alpha,\beta$-unsaturated ketones (Ref.3), abstract of which states that:

By carefully screening the organoselenium pre‐catalysts and optimizing the reaction conditions, simple dibenzyl diselenide was found to be the best pre‐catalyst for Baeyer–Villiger oxidation of (E)‐$\alpha,\beta$-unsaturated ketones with the green oxidant hydrogen peroxide at room temperature. The organoselenium catalyst used in this reaction could be recycled and reused several times. This new method was suitable not only for methyl unsaturated ketones, but also for alkyl and aryl unsaturated ketones. Therefore, it provided a direct, mild, practical, highly functional group‐tolerant process for the chemoselective preparation of the versatile (E)‐vinyl esters from the readily available (E)‐$\alpha,\beta$-unsaturated ketones. A possible mechanism was also proposed to rationalize the activity of the organoselenium catalyst in the presence of hydrogen peroxide in this Baeyer–Villiger oxidation reaction.

Oxone, a cheap, stable, and nonhazardous oxidizing reagent, transforms $\alpha,\beta$-unsaturated ketones of defined stereochemistry into their corresponding vinyl acetates through a Baeyer–Villiger reaction. This process is general and straightforward, tolerating a wide range of functional groups.

Both graphical abstracts of Ref.3 and Ref.4 (Scheme A and Scheme B, respectively) are depicted in following diagram for your convenience: 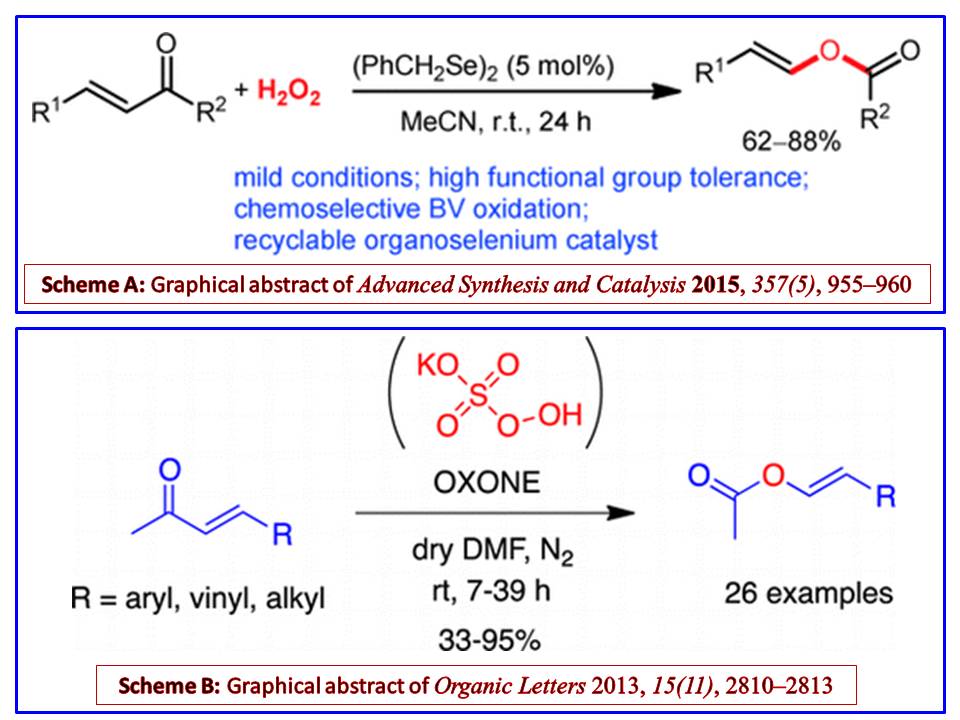 Note that Oxone (potassium peroxomonosulphate) has been used in epoxidation of alkenes in diphasic conditions in presence of a ketone (usually acetone) and phase transfer catalyst (e.g., Ref.5 and Ref.6). However, in these conditions, epoxidation has been failed when the substrate alkene is $\alpha,\beta$-unsaturated ketone (Ref.5).

Not the answer you're looking for? Browse other questions tagged organic-chemistry redox organic-oxidation chemoselectivity epoxidation or ask your own question.

20
Migratory aptitude in Baeyer-Villiger reaction
6
Selectivity in aldol condensation between pivaldehyde and acetone
4
Cannizzaro reaction versus Nitroaldol reaction
7
Mechanism of Grignard addition to carbonyls
5
Why does basic peroxide react via conjugate addition rather than through direct addition?
4
Selectivity of m-CPBA
0
Baeyer-Villiger Oxidation restricted to Ketones