Acidic cleavage of an ether

In the following question;

Apparently, an SN2 reaction ensues, where the iodine atom's supposed to cleave off with the less sterically hindered alkyl branch from both the oxygens. This is the solution: 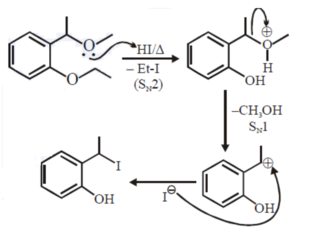 That's what happens with the lower oxygen, but what's going on with the top one? In the second step, why doesn't the methyl attached to it cleave off with the iodine atom?

reaction-mechanism ethers
Share
Improve this question
edited May 28 '20 at 14:52

Depending on the specific ether, cleavage can follow either $\mathrm{S_N1}$ or $\mathrm{S_N2}$ mechanisms. Distinguishing between both mechanisms requires consideration of inductive and mesomeric effects that could stabilize or destabilize a potential carbocation in the $\mathrm{S_N1}$ pathway. Usage of hydrohalic acids takes advantage of the fact that these agents are able to protonate the ether oxygen atom and also provide a halide anion as a suitable nucleophile.

So in essence, the mechanisms for such reactions are usually a trade-off between $\mathrm{S_N1}$ and $\mathrm{S_N2}$ pathways, with adequate carbocation stability playing a major role in the determination of the pathway (as intermediate cases like secondary cations often lead to a "confusing" case where it is difficult to say qualitatively whether the path is majorly $\mathrm{S_N1}$ or $\mathrm{S_N2}$).

In particular, the Wikipedia page cited above has pretty much answered your question under the $\mathrm{S_N2}$ ether cleavage tab:

If the potential carbocation can not be stabilized, ether cleavage follows a bimolecular, concerted $\mathrm{S_N2}$ mechanism. In the example, the ether oxygen is reversibly protonated. The halide ion (here bromide) then nucleophilically attacks the less sterically hindered carbon atom, thereby forming methyl bromide and 1-propanol.

So for your case, the upper oxygen after protonation can cleave the $\ce{C-O}$ via a $\mathrm{S_N1}$ pathway to generate a reasonably stable potential carbocation which is delocalized over the benzene ring. Hence,it can simply remove a molecule of methanol(which is a good leaving group by itself) on it's own without needing an iodide to assist in the removal.

The strongly acidic solution of $\ce{HI}$ will anyway ensure it that the methanol undergoes $\mathrm{S_N2}$ to form methyl iodide later. Also, from the point of view of a nucleophile,it would be much easier to perform an $\mathrm{S_N2}$ reaction on a separated methanol molecule than on the entire substrate molecule initially given in the question due to steric considerations,so that also becomes a contributing factor.

But as for the lower oxygen,the poor fellow does not have such a choice. The potential carbocation that can be generated by cleaving the lower $\ce{C-O}$ bond is a phenyl cation,which is pretty unstable as explained here. So, like the Wikipedia page said and illustrated in the example above, the pathway has to be a concerted $\mathrm{S_N2}$ mechanism now so as to take the reaction forward.

Note: Even if the said $\mathrm{S_N2}$ starts out slow, Le Chatlier's principle will ensure that ultimately, most of the reactant goes into the product as equilibrium is attained.

Not the answer you're looking for? Browse other questions tagged reaction-mechanism ethers or ask your own question.

1
Reductive amination of (protected) 3-Oxopropanenitrile: Will azetidin-2-ol be formed via intramolecular ring closure?
5
Heating of Ethers with HI and Cleavage of Ethers
5
Ether cleavage with conc HBr
6
How can isotope labelling be used to determine the mechanism of ether cleavage with hydrogen iodide?
11
Models for diastereoselectivity in nitronate additions
0
Role of zinc chloride in reaction of ether
1
Acidic cleavage of ether with a 2° alkyl group
1
Reaction of ether with HCl
11
The Evasive Ether: Existence of diethynyl ether?