I know that I should set up a reaction like:

If the reaction follows this scheme plot the left hand side vs $t$ and this should produce a straight line of slope $k(A_0b-B_0a)$.

Before jump into rate equation, I'd like to approach this in different direction. 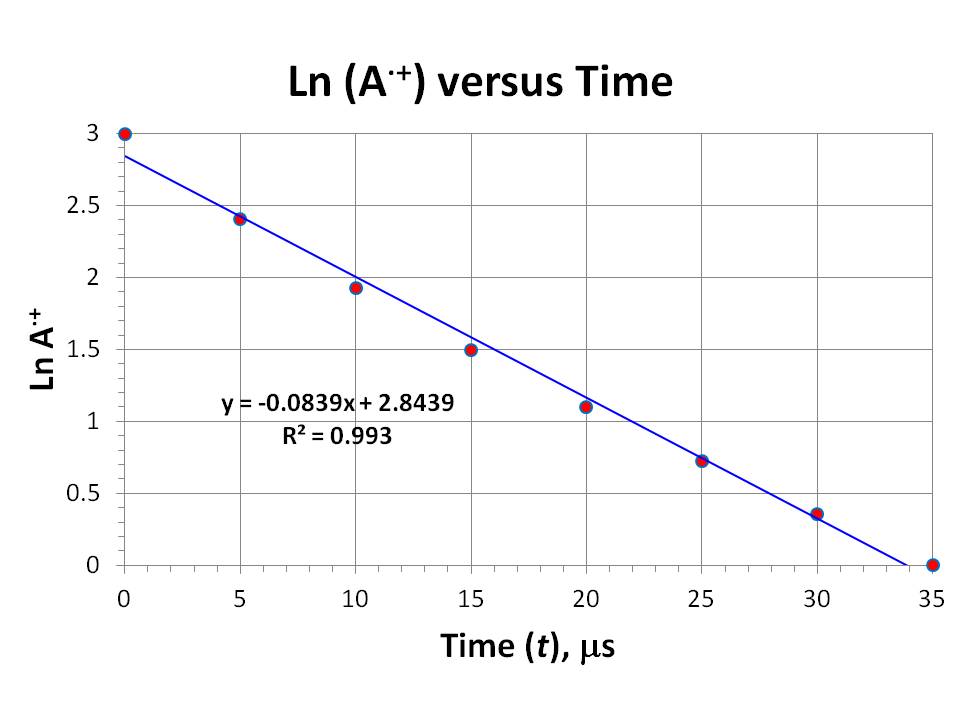 Thus, you can conclude that the decay process follows first order kinetics:

Based on this fact you may able to determine which path it takes to decay. Keep in mind that decay process only depends on the concentration of radical cation concentration.

A kinetics may be proven to be second-order when the initial concentrations of A and B are different, by using Frost and Pearson's treatment. In page $16$ of their manual, they say that the kinetics law is the following : $$\ce{\frac{1}{B_o - A_o}ln\frac{A_oB}{B_oA} = kt}$$ In order to simply prove that the reaction is second order, they recommend to simply plot log(B/A) against t.

Not the answer you're looking for? Browse other questions tagged physical-chemistry reaction-mechanism reaction-order or ask your own question.

11
How can the equilibrium shift, while Kc remains constant?
9
Comparing formula for enthalpy change with bond dissociation energy and formation enthalpy
7
How can enthalpy change of a system be negative while entropy change is positive?
1
Determining equilibrium concentrations from initial conditions and equilibrium constant
6
Formulas for non-bonded interaction energies
1
How to calculate the rate constant of a zero order reaction?
8
Disproportionation of hydrogen peroxide
8
Plotting a Langmuir adsorption isotherm