Why is acetate a monodentate ligand?

Why is the acetate ion considered a monodentate ligand as opposed to a bidentate ligand considering both oxygen atoms can donate their respective lone pair of electrons?

This depends a lot on the compound in question.

In general, a bidentate acetate would lead to a four-membered ring with the central metal; since the $\ce{O-C-O}$ angle is relatively fixed at approximately $120^\circ$ and since we expect the resulting compound to be at least somewhat symmetric, it would typically lead to unusually small bond angles or a $\ce{C\bond{...}M}$ distance that is too short. If, for example, we imagine $\angle(\ce{O-M-O})=90^\circ$, that means each $\ce{M-O-C}$ angle would be $75^\circ$ which is not what we usually observe in such compounds without a significant force holding it together. Coordinate bonds are usually not very strong, do not liberate enough energy and it would thus be more favourable for one of the two $\ce{O-M}$ bonds to be broken leading to acetate as a monodentate ligand.

There are, however, exceptions. My favourite is probably $\ce{[Cr2(OAc)4(H2O)2]}$ or chromium(II) acetate monohydrate. In this compound, four acetate ions arrange around two chromium atoms in a bidentate fashion; however, each individual acetate bonds to two different chromium ions via its two oxygens. In addition, a water molecule sits on each end of the $\ce{Cr-Cr}$ axis and it turns out the bond between the two chromium ions is, in fact, a quadruple bond. The quadruple bond permits the chromium atoms to come close enough to each other so that the acetates can arrange in a preferable configuration. 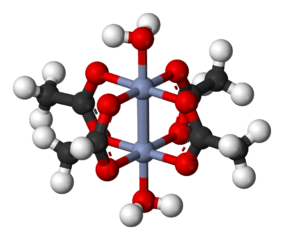 (Image taken from Wikimedia, where a full list of authors is available)