Liquid nitrogen seems to be attracting a bit of attention at the moment as a medium of energy storage, both for electricity grid applications and for transport.

For example, Highview (via the Internet Archive) are doing round-trip electricity storage via liquid nitrogen. 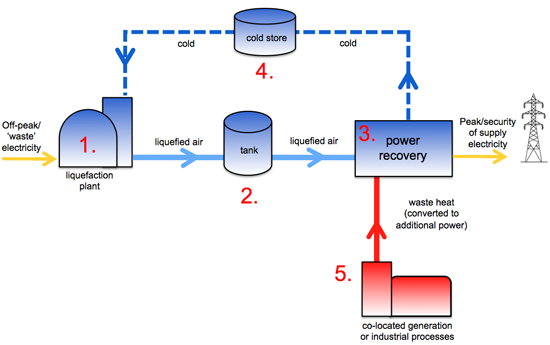 The Dearman Engine Company (via the Internet Archive) are developing a "liquid-air" vehicle engine.

And the UK’s Institution of Mechanical Engineers has formed a Liquid Air working group (via the Internet Archive).

What is the energy density of liquid nitrogen, per unit volume and per unit weight, assuming we’ll be bringing it up to 20 °C, 1 bar? How does this compare to the energy densities of isooctane and of Li-ion batteries?

Just skimmed over the links:

Using ambient heat to warm it, the process recovers around 50 per cent of the electricity that is fed in, says Highview's chief executive Gareth Brett. The efficiency rises to around 70 per cent if you harness waste heat from a nearby industrial or power plant to heat the cryogen to a higher than ambient temperature, which increases the turbine's force, he says.

Batteries under development .. have efficiencies of around 80 to 90 per cent, but cost around \$4000 per kilowatt of generating capacity. Cryogenic storage would cost just \$1000 per kilowatt because it requires fewer expensive materials, claims Brett.

Here's some evidence that people who know about gas and liquid air are interested in the technology: strategic partnership between Messer and Highview

Actually Highview has a presentation on their web-site that contains a lot of information. Note that they propose to run a 4-stage process against heat (ca. 100 °C), not ambient temp.

Pump-stored hydroelectricity: 70/75 - 80% (Wiki + de.Wiki)
(Note the difference between technology that is actually in use, so efficiencies that are achieved in practical use are known and prototypes/scientific studies about achievable efficiency.)

Dearman claims 70% efficiency for the engine.

Let's have a look what thermodynamics says:

Thus, the 50% (achieved by Highview) to 70/80% (short term goal Highview against waste heat, quote for Dearman's engine) mean that

Update: just had a closer look at the Highview presentation. Their 50 - 80% are cycle efficiency based on "Available enthalpy for cold cycle ~300kJ/kg", so less than half of the energy density they give. Calculating with 1750 kJ/kg to produce the kg liquid air, we're at 17% (close to the "Egyptian" 20% efficiency for producing liquid air), of which they recover 0.5 - 0.8.

Conclusion: electric -> liquid air -> electric cycle with an overall efficiency in the order of magnitude of 10%

According to Energy and Materials Flows in the Production of Liquid and Gaseous Oxygen (Shen and Wolsky, Argonne National Lab, 1980), the ideal (thermodynamically reversible) amount of work to liquify nitrogen is $\pu{21 400 J/mol}$, or $\pu{0.21 kWh/kg}$ (Table 12, page 17).

I would agree that the Carnot cycle would be appropriate for estimating how much energy it takes to liquify nitrogen, but in terms of expanding it by heating to perform useful work, wouldn't that be Charles' Law?

16
What is the chemistry behind this "petrol from air" technology?

3
What's the minimum amount of energy needed to remove CO2 from the atmosphere?