How to identify if a material is perovskite or not?

This is more of a materials science question, but I believe many of you have referred NIST Inorganic Crystal Structure Database (ICSD) database.

I am collecting a database of perovskite materials and got a little bit confused on how the structure type is defined in the ICSD website.

Finally, sometimes I see the structure type named 'Elpasolie' or $\ce{LiNbO3}$ (disordered). Are these also perovskites? (or double perovskites?)

As MaxW indicated in the comment, perovskites are a huge family of natural and synthetic compounds. Following is a breif description of the group of compounds named perovskites:

The original Perovskite is a mineral of formula $\ce{CaTiO3}$. It was first discovered in 1839 by the Prussian minaralogist Gustav Rose in the Ural Mountains, and is named after Russian mineralogist Count Lev Aleksevich von Perovski (1792–1856). The natural crystals have a hardness of 5.5-6 and a density of $\pu{4000-4300 kgm-3}$. The crystal structure of this mineral was initially thought to be cubic, but was later shown to be orthorhombic (Ref.1). 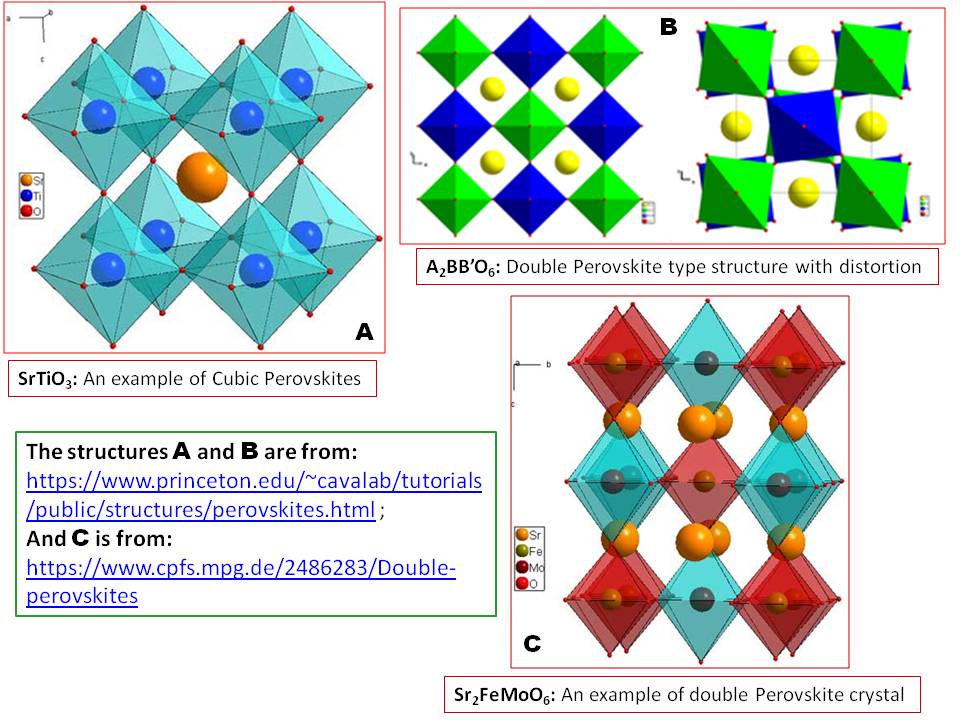 The traditional view of the perovskite lattice is that it consists of smaller $\ce{B}$ cations within oxygen octahedra, and larger $\ce{A}$ cations which are nine fold coordinated by oxygen. According to this Princeton website where I abstracted the structure A (Note: I have modified to some extent):

Proper choice of the metal ions $\ce{B}$ and $\ce{B'}$ and of the alkali, alkaline earth, or rare earth ions $\ce{A}$ allows to realize a large variety of physical properties in double perovskites. Prototype compounds which have found much interest are $\ce{Sr2FeMoO6}$ and $\ce{Sr2FeReO6}$ as they are half-metallic ferromagnets with Curie temperatures above room temperature and large magnetoresistance effects at ambient conditions.

Note: The best advice to OP is start with the book (Ref.1), which is written in basic language, understandable for any novice student learning about Perovskite materials. In addition, since OP is conveniently in England, I believe he can consult the author of the book, Prof. Richard J. D. Tilley, Ph.D., the Emeritus Professor in the School of Engineering at the University of Cardiff, Wales, United Kingdom, if OP has additional questions on Perovskite materials.

The HMS column is for the Hermann–Mauguin Symbol.

You can see the line for 55700 has "P4mm" which is the proper crystal symmetry to be of the Perovskite structure.

That line is also notated "Perovskite#PbTiO3#B". So of the formulations listed that is the only one that has the Perovskite crystal structure.

Not the answer you're looking for? Browse other questions tagged inorganic-chemistry experimental-chemistry crystal-structure solid-state-chemistry notation or ask your own question.