So will the electron density on the benzene ring increase or decrease?

Your reasoning is not quite correct. Since electron density on $\ce{N=O}$ bond is more around $\ce{O}$ than $\ce{N}$ (electronegativity of $\ce{O}$ is greater than that of $\ce{N}$), $\ce{N}$ should have a slight $\delta+$ charge, which demands electrons from adjacent $\pi$-system. As a result, the electron density on the phenyl nucleus of nitrozobenzene is less compared to that of benzene. This phenomena is shown as a ring deactivating factor. However, this fact may be hard to prove practically because of the instability of nitrozobenzene.

Yet, in computational studies, one set of descriptors of electron structure of aromatic compounds may come from the pEDA/sEDA approach (Ref.1). The pEDA and sEDA descriptors are defined as populations of the $\pi$- and $\sigma$-orbital electrons, respectively, in a given planar molecule or its planar part (Ref.1 & Ref.2): 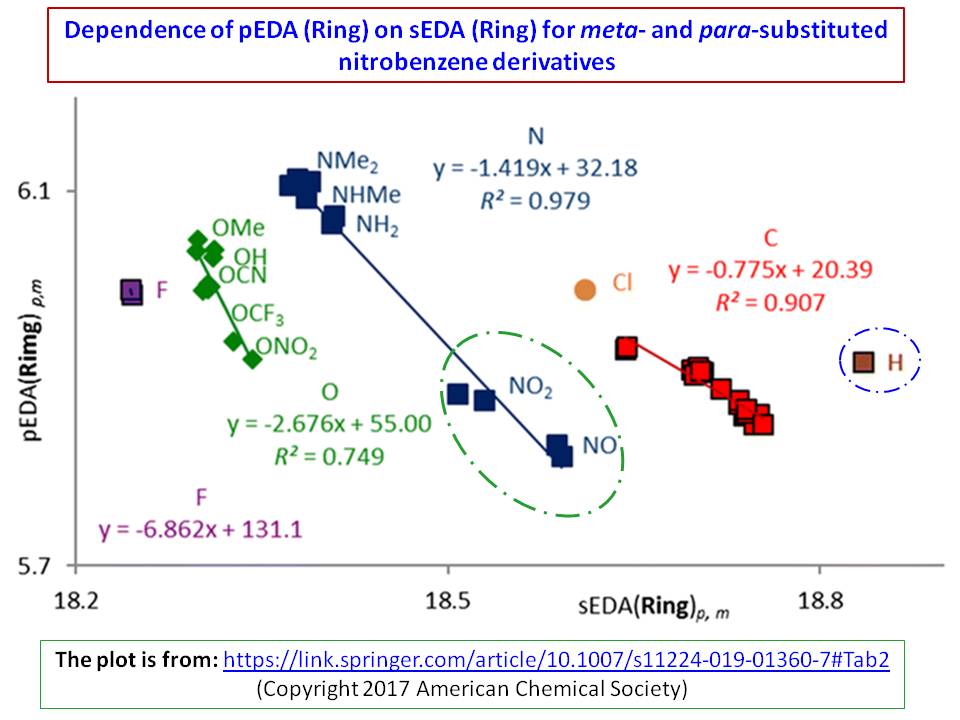 The abstract of Ref.2 states that:

An application of quantum chemical modeling allowed us to investigate a substituent effect on a $\sigma$ and $\pi$ electron structure of a ring and the nitro group in a series of meta- and para-$\ce{X}$-substituted nitrobenzene derivatives ($\ce{X =}$ $\ce{NMe2}$, $\ce{NHMe}$, $\ce{NH2}$, $\ce{OH}$, $\ce{OMe}$, $\ce{Me}$, $\ce{H}$, $\ce{F}$, $\ce{Cl}$, $\ce{CF3}$, $\ce{CN}$, $\ce{CHO}$, $\ce{COMe}$, $\ce{CONH2}$, $\ce{COOH}$, $\ce{NO2}$, and $\ce{NO}$). The obtained pEDA and sEDA parameters (the $\pi$- and $\sigma$-electron structure characteristics of a given planar fragment of the system obtained by the summation of $\pi$- and $\sigma$-orbital occupancies, respectively) of the $\ce{NO2}$ group and the benzene ring allowed us to reveal the impact of the substituents on their mutual relations as well as to analyze them from the viewpoint of substituent characteristics. The decisive factor for dependence of pEDA on sEDA of the ring is electronegativity of the atom linking the substituent with the ring; in subgroups an increase of sEDA is associated with a decrease of pEDA. The obtained mutual relation between pEDA($\ce{NO2}$) and pEDA(ring) characteristics documents strong resonance interactions for electron-donating substituents in the para position. The observed substituent effect on the $\sigma$-electron structure of the nitro group, sEDA($\ce{NO2}$), is significantly greater (∼1.6 times) for meta derivatives than for the para ones.

Although, there is no general correlation between these two contributions, pEDA(ring) and sEDA(ring), to the description of the electronic structure of the transmitting ring, it's worth comparing effect of $\ce{NO}$ substituent with the known effect of $\ce{NO2}$. It is clearly the population of the $\pi$-electrons are lower in nitrobenzene when $\ce{NO}$ group substituted in para- or meta-position of it compared to that of second $\ce{NO2}$ group substituted in either position (see $\color{green}{\text{green circle}}$ of the plot). Both $\ce{NO}$ and $\ce{NO2}$ groupd have shown $\pi$-electon withdrawing effects on the ring compared to nitrobenzene itself ($\ce{X = H}$; $\color{blue}{\text{blue circle}}$). Therefore, it is safe to say that the electron density on the phenyl ring decreases in nitrozobenzene compared to that of benzene. This conclusion is supported by the positive Hammett substituent constant ($\sigma$-value) listed for $\ce{NO2}$ substituent in benzoic acid: $\sigma_{p-\ce{NO}} = 0.91$ and $\sigma_{m-\ce{NO}} = 0.91$. By comparison, $\sigma_{p-\ce{NO2}} = 0.78$ and $\sigma_{m-\ce{NO2}} = 0.71$ (The authors referred Ref.3 for these $\sigma$-values).

9
Why is the nitroso group a deactivating group for electrophilic aromatic substitution?

3
Orbital Electronegativity Considerations in Resonance Structures
3
Proper Resonance Structures
0
Do each and every resonant structures contribute to a resonance hybrid?
1
Is my reasoning for resonance structures correct?
6
Does the carboxylate group show a positive or a negative inductive effect?
8
Which of these carbocations are more stable?
0
4-Bromophenol vs 4-aminophenol pKa in water comparison confusion
0
Is there really any difference between Resonance and Mesomeric effect?