How to draw the 2D representation of ammonia molecule

In the 2D representation of the ammonia molecule, we see one solid line, one solid triangle and one dashed triangle 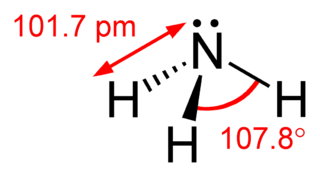 A plane can be made to pass through any three given points. In other words, we can always find a plane which will pass through any three given points in space. So the central N atom and two H atoms will lie in a plane. Only one H will be out of plane. So I think, in the 2D representation, we need to show two solid lines and one solid triangle. Please give your opinion about this. Thanks

According to the rules, yes, Ammonia can be drawn with three of it's atoms in one plane and the other outside the plane. Here's an example, along with a 3D projection: 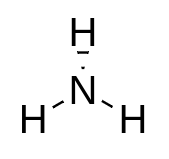 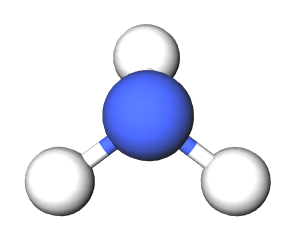 However, what do you comprehend from this structure? This structure does not convey the trigonal pyramidal geometry of the molecule very convincingly. It might be mistaken for trigonal planar at a glance, and this defeats the purpose of using the wedge/dash notation. Ammonia (and several other tetrahedral molecules) are represented in that manner since it is easiest to interpret their 3d structure from a 2d image. 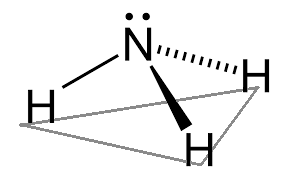 11
What actually is the Wavefunction?
2
How to systematically find the reducible representation of a molecule? (eg: XeF4)
4
Is the neutral di-µ-oxo-bridged manganese dimer with eight ammonia ligands a reasonable structure?
2
How to quantify the difference between two xyz files for the same molecule?
0
Software that determines whether a molecule can exist and draw it from a formula?
2
What is the largest, noncrystalline, non-polymer inorganic molecule?
1
Determine and draw planes and axes of symmetry of a molecule using software (VESTA or Mercury)
0
Maximum number of coplanar atoms in difluorotrimethylphosphorane
7
Caffeine molecule representation and orientation