How to derive composite acidity constant for H2CO3*? 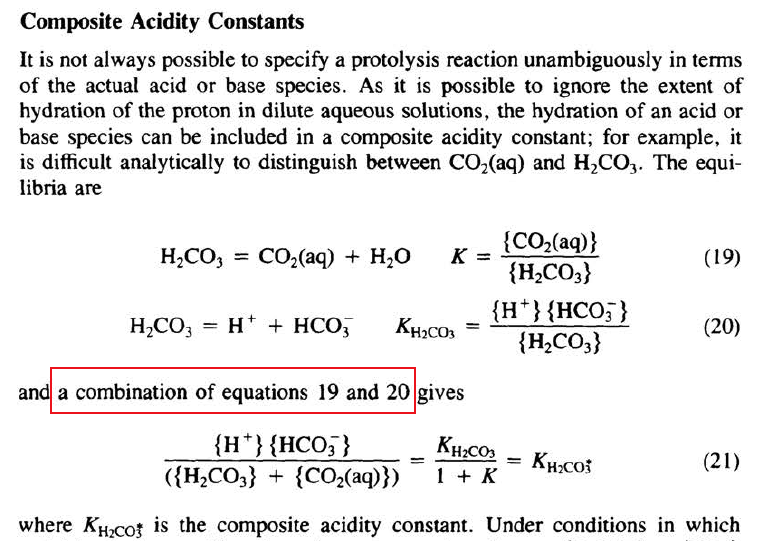 They meant they combine the mathematical expressions, not the chemical equations.

in terms of concentrations, you substitute equations (1) and (2) into the expression:

Multiplying top and bottom of the fraction by $\ce{[H2CO3]}$ gives:

If you want to make the intention clearer, you define a total concentration of carbon dioxide as

I take perhaps a more intuitive view of the system, and in the case of, for example, Iron bicarbonate, it intuitively explains its formation in well water under pressure and its subsequent decomposition upon exiting a faucet at ground level.

I start with a modified cited equation (19) citing gaseous and not aqueous carbon dioxide in the equilibrium reaction:

I also cite Equation (20) and introduce dissociated CO2 as represented by carbonic acid:

Now, at high pressure, examining the modified (19) above, per Le Chatelier's Principle, the position of equilibrium will move to produce more carbonic acid, and more bicarbonate per the second equation, resulting in the creation of Iron bicarbonate.

However, with the release of pressure, the bicarbonate equilibrium concentration shifts to create more carbonate acid, which can decompose releasing CO2 gas resulting in the ultimate removal of the bicarbonate ion and the decomposition of Iron bicarbonate, as reported.

Note, to preserve the total concentration of carbon dioxide in the system: