I was studying the Wurtz reaction, and I wanted to figure out the mechanism. When I searched the web, I came across the single electron transfer (SET) mechanism explanation. How can the alkyl group and the halogen form free radicals when the halogen is clearly much more electronegative then the alkyl group?

organic-chemistry reaction-mechanism
Share
Improve this question
edited May 15 '20 at 20:18

To answer your first question, it is important to note that the halogen does not form free radicals in this mechanism. Instead, the driving force is the net formation of sodium halides, as illustrated in the mechanism I drew below. In the preceding sections, I will try to compare the Wurtz mechanism to a perhaps more familiar one, the Grignard mechanism. This should help elucidate some general aspects of organometallic mechanisms.

If you are familiar with the Grignard reaction, the following comparison may help clear up the involvement of radical species in the mechanism. The Wurtz reaction is in fact very similar to the Grignard reaction. Both involve the 'insertion' of a metal species in between the carbon-halogen bond. In the case of the Grignard reaction, this metal is magnesium. This allows for the formation of a simple alkyl magnesium halide; however, with the Wurtz reaction, the addition of a sodium atom in between the carbon-halogen bond results in the formation of neutral sodium halide and a carbon radical. This carbon radical will rapidly react with another equivalent of sodium metal to form a carbanionic species, which will in turn displace another halogen in an Sn2 reaction.

The Wurtz reaction is not a super useful reaction due to the formation of this reactive radical. Most chemists would opt to use the much gentler Grignard reagent. Below, I have drawn out the mechanism of the Wertz reaction of 1-bromo-3-chlorocyclobutane to form bicyclo[0.1.1]butane. In this, you can see that a carbon radical is formed. This radical must come in contact with another equivalent of sodium before it is neutralized to form a carbanionic species. For this reason, the radical will also have plenty of time to react with other parts of the molecule in unwanted ways. The Grignard reaction, on the other hand, results in the formation of a radical in the 'reduction' step; however, this is neutralized very quickly in the recombination step and will thus not react unnecessarily with other parts of the molecule. I have included a diagram of the Grignard reagent formation below.

Mechanism of the General Wertz Reaction 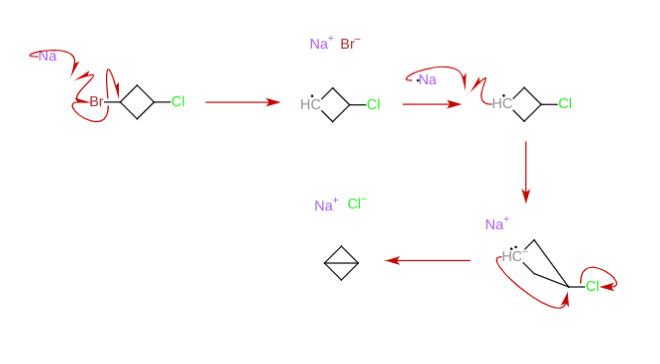 Mechanism for the Formation of a Grignard Reagent

1
How to know when electrons will be added onto Lewis Structure from surrounding atoms to become ion?
2
High concentration of ferric ion catalyst decreases rate of decomposition of hydrogen peroxide in the Fenton reaction
1
How does conversion of a free radical to a carbonyl compound take place? Unsure about mechanism
6
Order of reactivity of substrates towards Wurtz reaction
0
Why are halogens base sensitive groups (Wolff-Kishner Reduction)?