Why are chelating ligands such as EDTA often used to treat poisoning by heavy metals (e.g., mercury, lead)?

I have a vibe that it has something to do with the lone pairs of electrons that are able to bond to the heavy metals to form a stable coordination complex but I'm not sure about the in-depth process or explanation behind this.

Lead, mercury and other heavy metals form complexes with both monodentate and polydentate ligands. But the complexes made with polydentate ligands like EDTA are much more stable than with monodentates. Usually metallic complexes become toxic if the central metallic ion (non-complexed) is released or not entirely surrounded by ligands. Monodentate complexes do not surround completely the central metallic ion, and they may be decomposed by the acidity of the stomach. Polydentate complexes resist to this acidity, and often they surround the metallic ions much better than monodentate. So if a person has ingested one of these heavy metal ions, its toxicity will be hidden by a complexing agent like EDTA.

Chelation therapy, which is a very effective way to treat heavy-metal poisoning, is a chemical process in which a synthetic solution is injected into the bloodstream to remove heavy metals and/or minerals from the body. British Anti-Lewisite (BAL) was one of the first chelating agents to be developed as an anti-dote for war gas, dichlorovinyl arsine (Lewsite) during the Second World War. The breakthrough in the development in chelating therapy came after the introduction of ethylenediaminetetraacetic acid (EDTA), initially to combat lead intoxication (Ref.1).$^*$

$^*$During Second World War, dimercaprol (BAL), an organic dithiol compound, was developed as an experimental antidote against the arsenic-based poison gas Lewisite. After World War II, mass lead poisoning was observed in large number of navy personnel, later identified as a result of their jobs repainting the hulls of ships. This introduced the medical use of EDTA as a lead chelating agent. (Ref.2) 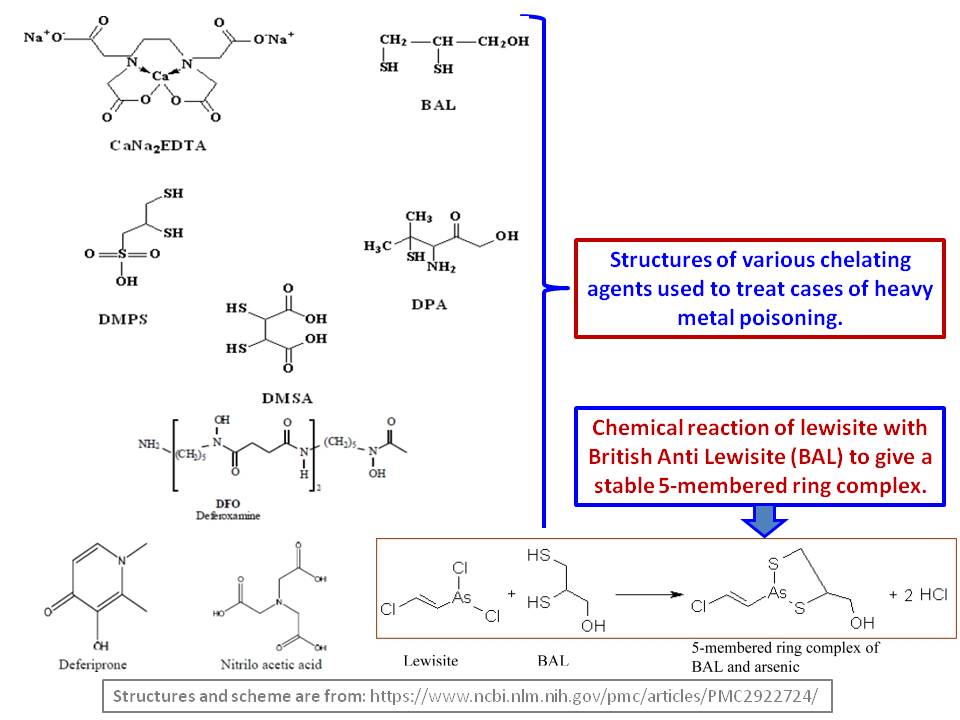 A specific salt of EDTA used to bind metal ions in the practice of chelation therapy is calcium disodium ethylenediaminetetraacetate (or sodium calcium edentate; $\ce{CaNa2EDTA}$), specifically treating mercury and lead poisoning. When this EDTA solution is injected into the veins, which is a slow process (administration must be intravenous because it has very law intestinal uptake), it chelates with (or "grabs") heavy metals and minerals such as lead, mercury, copper, zinc, iron, arsenic, aluminum, and calcium. The heavy metal-EDTA complex will be then removed from the body through urinary system.

For example, lead poisoning is generally treated by using the chelating salt, $\ce{CaNa2EDTA}$, which is the calcium chelate of EDTA. This chelating agent has a great affinity to heavy metals, the removing agents such as $\ce{Pb^2+}$. The point is this chelating agent has a greater affinity to lead than to calcium (see large $\log K_f$ values of heavy metals compared to that of $\ce{Ca^2+}$ in following table) and so the lead chelate is formed by exchange. Then, the lead chelate would be excreted in urine, leaving behind harmless calcium. The disadvantage of this therapy is though it removes only extracellular heavy metals.

Further, $\mathrm{pH}$ also is an important factor influencing complex formation and stability. Most chelating agents are unstable at low $\mathrm{pH}$, whereas at high $\mathrm{pH}$ metals tend to form insoluble hydroxides which are less accessible to chelating agents. This feature becomes significant in pathological conditions leading to acidosis or alkalosis (Ref.2).

Note that the value of EDTA as clinical chelating agent was reduced by the need for slow intravenous administration, law intestinal uptake, exclusive extracellular action, and high stability constants with essential metals such as Zn, Cu, and Mn (Ref.1, Ref.3).

4
Problems with precipitation of transition metal solution
15
Why are noble metals more electronegative then most metals?
2
Why are transition metals said to have different valencies?
16
Why are palladium and platinum carbonyls unstable at room temperature?