Raman scattering and "electron and proton center" of molecule

I am currently studying the textbook Infrared and Raman Spectroscopy, 2nd edition, by Peter Larkin. In a section entitled The Raman Scattering Process, the author says the following:

Light scattering phenomena may be classically described in terms of EM radiation produced by oscillating dipoles induced in the molecule by the EM fields of the incident radiation. The light-scattered photons include mostly the dominant Rayleigh along with the very minor amount of Raman scattered light. The induced dipole moment occurs as a result of the molecular polarizability $\alpha$ where the polarizability is the deformability of the electron cloud about the molecule by an external electric field. Fig. 2.9 shows the response of a nonpolar diatomic placed in an oscillating electric field. 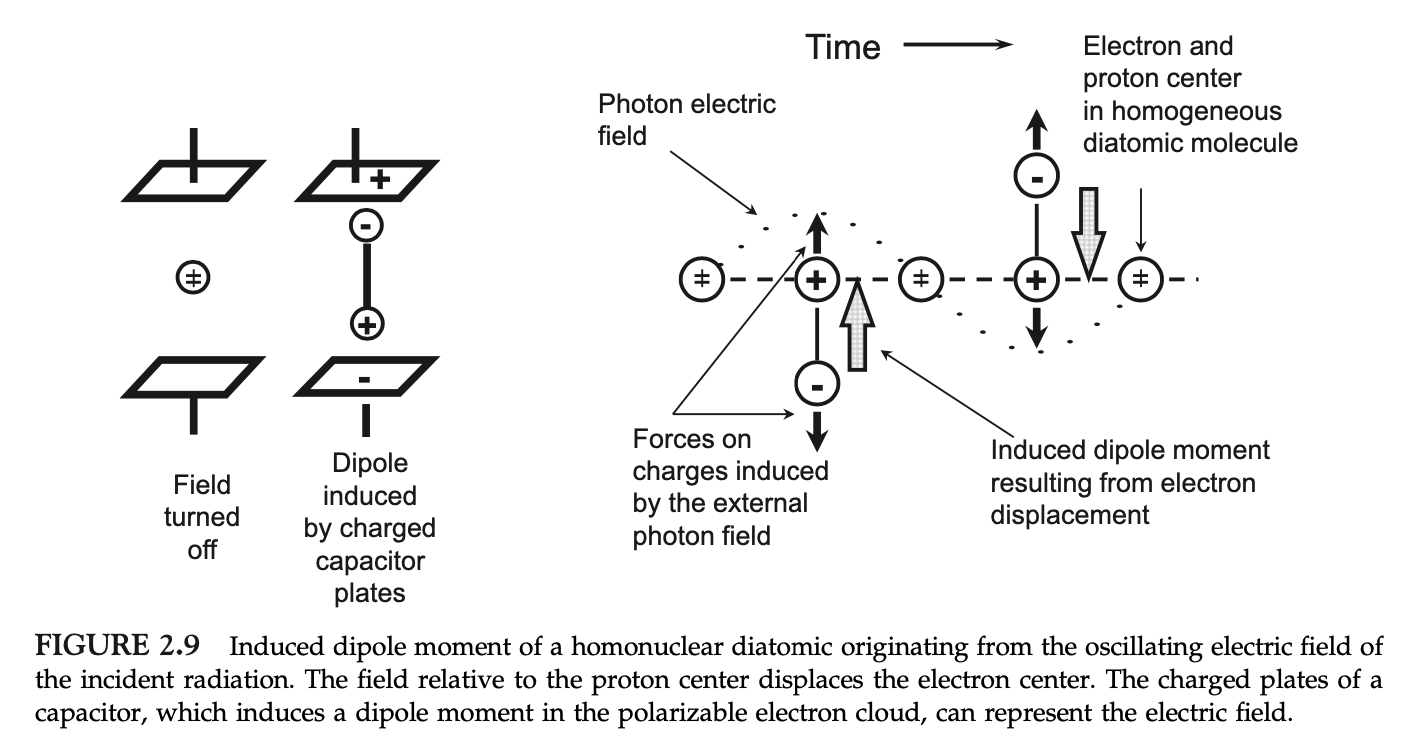 Here we represent the static electric field by the plates of a charged capacitor. The negatively charged plate attracts the nuclei, while the positively charged plate attracts the least tightly bound outer electrons resulting in an induced dipole moment. This induced dipole moment is an off-resonance interaction mediated by an oscillating electric field.

I would greatly appreciate it if someone would please take the time to clarify this.

I guess for homogeneous read homo-nuclear. He is trying to explain how the electric field of the radiation induces a dipole by shoving the electrons around, hence reference to polarisability: this relates to the standard description. This induced oscillating field then radiates, hence scattering. The electron and proton centre is when the field is zero, i.e. whatever that distribution is in the molecule in no external field

Not the answer you're looking for? Browse other questions tagged physical-chemistry dipole electromagnetic-radiation raman ir-spectroscopy or ask your own question.

6
Relationship between electric dipole moment and polarization?
9
What is the quantum mechanical explanation of X-ray diffraction?
3
Raman transition and IR transition
10
Radiofrequency transmitter in an NMR experiment: Is there an involvement of (electromagnetic) radio wave?