boiling-point pressure vapor-pressure
Share
Improve this question
asked May 14 '20 at 15:03

Obviously if you are boiling chemical X in an open beaker then you can't create a vapor pressure of 1 atm of chemical X over the beaker. However as Jon Custer noted in his comment you can see bubbles forming in the beaker which indicate that the liquid is boiling. A thermometer in boiling liquid would give you the boiling point, at whatever the local atmospheric pressure is.

A way to actually have 1 atmosphere of vapor pressure over a boiling liquid would be to use a reflux setup. The vapor evaporating from the liquid pushes its way up the condenser column, where it cools, forms a liquid and drips back down into the pot. Thus the vapor over the boiling flask is the pure compound which is boiling. The thermometer shown would measure the temperature of the vapor which would be the same as the temperature of the liquid. (You could use two thermometers, one in the vapor and one in the liquid to check this...) 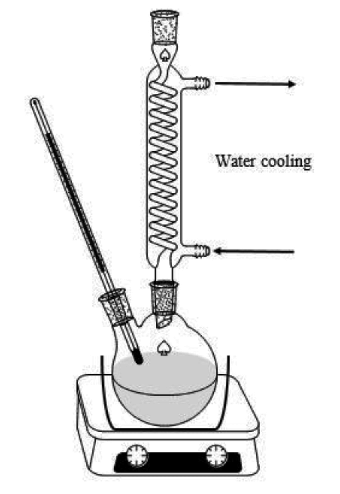 Not the answer you're looking for? Browse other questions tagged boiling-point pressure vapor-pressure or ask your own question.

12
Vapor pressure and boiling point for solutions in open containers

2
What is the connection between vapor pressure and intermolecular force explanations of boiling?
2
How accurate would be the following conclusion on 'Critical Temperature'?
1
Colligative properties