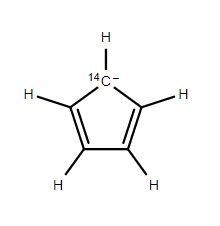 Is there any difference between electronegativities of isotopes of the same element. For example consider the above compound. Will all the resonance structures be equivalent?

Also if I place the above compound in water (which will act as a Bronsted acid), which carbon will get the H atom?

As the first premise, let's consider stability of the two kinds of resonating structures. The more stable the resonating compound, the more likely it is to be protonated. 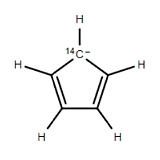 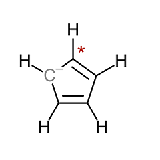 We can compare stability using the premise of electronegativity (or rather charge density). According to this property, the more heavy an atom, the larger is its volume. If volume increases, the charge density decreases making it less likely to be able to stabilize the negative charge (becomes less electronegative). Due to this we can say that the resonance structure with $\ce{^14C}$ having the negative charge is less stable and so is less likely to be protonated.

Now, moving onto the second premise, the number of resonating structures containing the negative charge on $\ce{^14C}$ and $\ce{^12C}$ respectively.

Now, if we combine the two premises, we see that both stability and frequency of the resonance structure containing $\ce{^12C}$ with negative charge is greater its $\ce{^14C}$ counterpart. Concluding, we can say that the resonating structure with $\ce{^12C}$ stabilizing the negative charge would be more likely to be protonated.

Further Reading on how stability of isotopic compounds can be determined : Inductive effect of hydrogen isotopes

A tentative reasoning could be made on the basis of charge density (on nucleus).

More number of neutrons means larger size of nucleus, but with the same number of protons. Hence, positive charge density (on nucleus) will get reduced, and hence the electronegativity.

But these comparisons can be made on numbers only, as discussed in the comments.

EDIT: (after I read the marked answer carefully, I found that I'd not answered the second part of question. So, here it goes.)

As the $\ce{^{14}C}$ isotope is less EN, therefore it is relatively less stable while carrying a negative charge on it. Hence, protonation would happen on a stable intermediate, which is $\ce{^{12}C}$.

Yes, it is there due to the increased size of nucleus. But, the difference in the electronegativity of the two isotopes would be so small that you can easily neglect it.

2
Nitric acid vs. chloric acid strength
7
Why is there a need for resonance?
10
Difference between Resonance Effect and Mesomeric Effect
3
Why can one double bond exist in some resonance structures but two can't?
4
Stability of canonical forms
5
How to determine the relative contribution of resonance structures when different rules give contradictory outcomes?
3
Ortho-para directing and meta directing groups: Activating or deactivating the aromatic ring?
1
What is the difference between resonance and π conjugation