Order of reactivity of substrates towards Wurtz reaction

In a book I refer, it is said that:

Both Ionic [carbanion] mechanism as well as free radical mechanism are widely accepted for Wurtz reaction.

When I read this statement, I was thinking, which of these mechanisms would be able to explain the order of reactivity of different substrates towards Wurtz reaction. My conclusion was that the rate of the reaction should follow the below mentioned order:

So, my doubt is what is the correct consolidated order of reactivity of alkyl halides towards Wurtz reaction?

I know my question could be a possible duplicate of this.

However, I did not get a satisfactory explanation over there and hence have asked it as a new question.

The Wurtz reaction is an organic reaction, in which two molecules of an alkyl halide (e.g., $\ce{R-Cl}$) are coupled in the presence of $\ce{Na, Mg}$, or other reactive metals to form an alkane (original classical Wurtz reaction used $\ce{Na}$ metal). The mechanism begins with a single electron transfer (SET) from sodium metal to the alkyl halide, which dissociates to form an alkyl radical ($\ce{R^.}$) in a similar fashion to the formation of a Grignard reagent and sodium halide salt (e.g., $\ce{NaCl}$):

A second molecule of sodium undergoes another SET to the alkyl radical to form a nucleophilic carbanion (e.g., $\ce{R-}$):

This alkylmetal intermediate can be isolated (e.g., alkyllithium) and has been isolated in a several cases. The carbanion then attacks another molecule of alkyl halide in a nucleophilic substitution reaction ($\mathrm{S_N2}$) to form the final coupled product (e.g., $\ce{R-R}$) and another molecule of sodium halide salt: 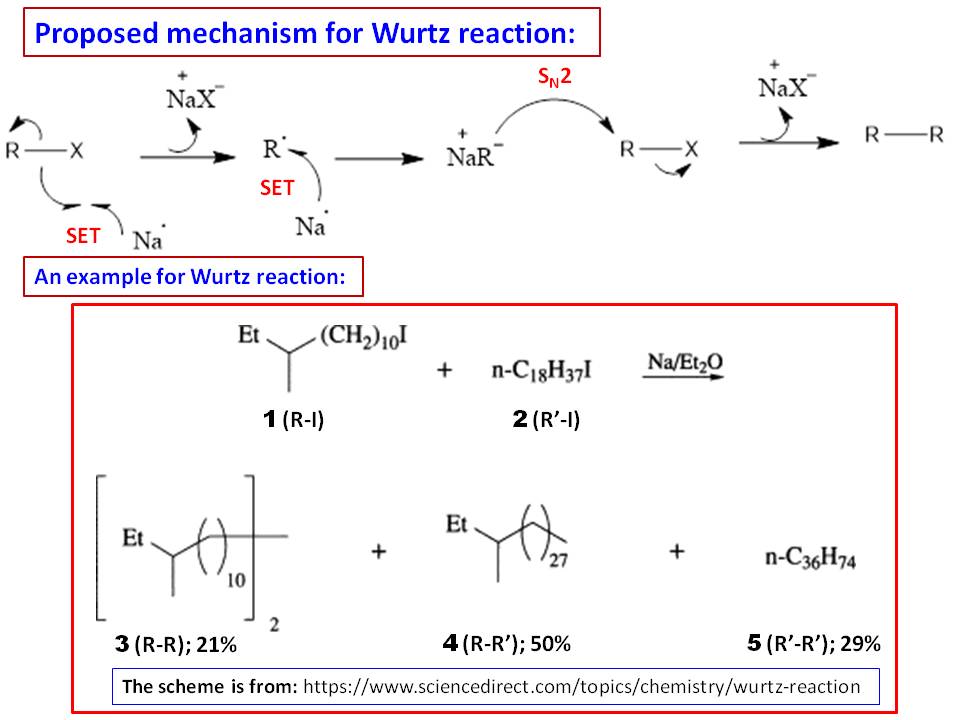 In a review of the Wurtz reaction (Ref.1) revealed that the reaction is severely limited in scope as demonstrated by the following observations:

However, This classical reaction is of value in the preparation of cyclic systems, notably [2.2]phanes and bicyclobutanes (e.g., bicyclo[1.1.0]butane), as well as in the preparation of symmetric dimers. The Wurtz reaction provides one of the most successful approaches to these class of compounds, by ring-closure reactions. The reaction may proceed either intra- or inter-molecularly, with intramolecular couplings giving better yields (Ref.1): 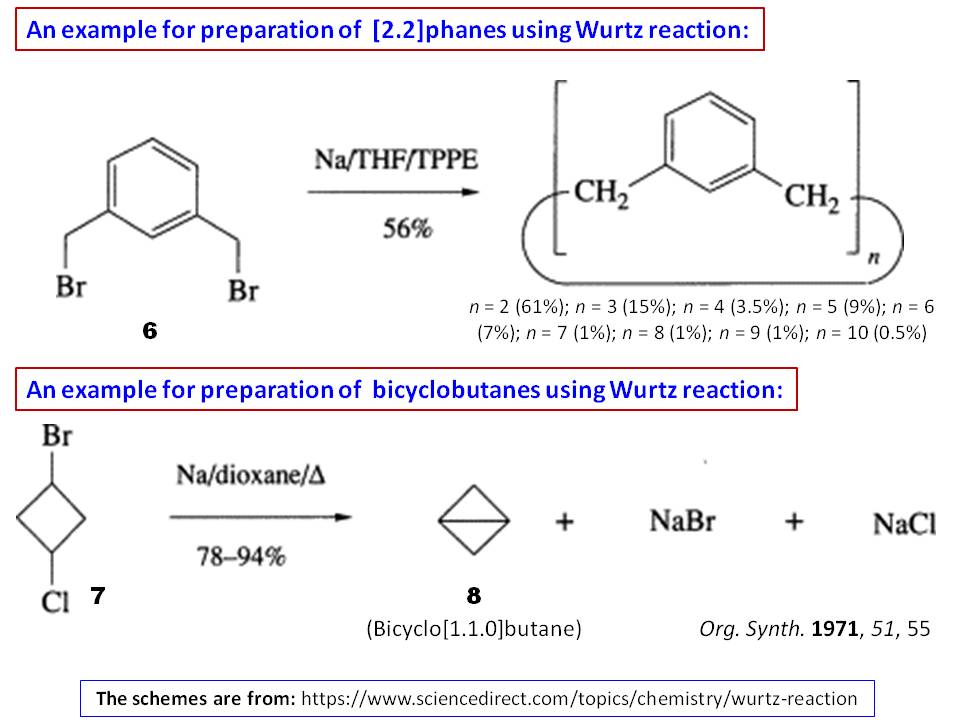 The modest yields of [2.2]phane products are due to competing oligomerization/cyclization reactions, which is demonstrated by the product distribution obtained on treatment of the dibromide (6) with sodium/tetraphenylethane (TPE) in THF at $\pu{-80 ^\circ C}$ (See above diagram). A homologous series of products has been obtained under these conditions, the approximate yields of the metacyclophanes being obtained were given in the scheme.

In conclusion, the Wurtz reaction is seldom used because of side reactions and it is intolerant of a range of functional groups. It has limited use to the synthesis of symmetric alkanes and cycloalkanes. If two dissimilar alkyl halides are taken as reactants in cross coupling reactions, the resulting product is a mixture of alkanes that is often difficult to separate. In the case of (1,3), (1,4), (1,5), (1,6) dihalides (when used as a reactant), the reaction leads to formation of cyclic products instead of intended dimerization. The Wurtz reaction fails in case of tertiary halides. In addition, since the reaction involves free radical species in one part of the mechanism, a side reaction occurs to produce an alkene (specially with 1,2-dihalides). This side reaction becomes more significant when the alkyl halides are bulky at the halogen-attached carbon atom.

There is an organometalic compound in the mechanism at one stage, which undergoes a $\mathrm{S_N2}$ replacement of halide ion of available second $\ce{R-X}$ molecule. Whether these types of organometalic compounds are ionic (cabanionic nature of $\ce{R-}$) has been discussed and reviewed using quantum chemical calculations recently (Ref.2).

Not the answer you're looking for? Browse other questions tagged organic-chemistry reaction-mechanism hydrocarbons or ask your own question.