Why does the amount of CO2 produced decrease with more baking soda?

I'm in chemistry class and we have an assignment and they gave us a video and I took down the data they gave us. They fist measured out 10mL of vinegar for each trial and used different amounts of baking soda in all 8 trials. They put the baking soda in a beaker then poured the vinegar into the beaker and capped it with a one hole stopper and a syringe in the hole. It was about a 1-1.5 second delay between poring the vinegar and capping it. I don't understand why the amount of CO2 produced wouldn't increase at the beginning then flat-line when the vinegar becomes the limiting reactant. I posted a graph of the data we received. All trials had the same amount of vinegar. 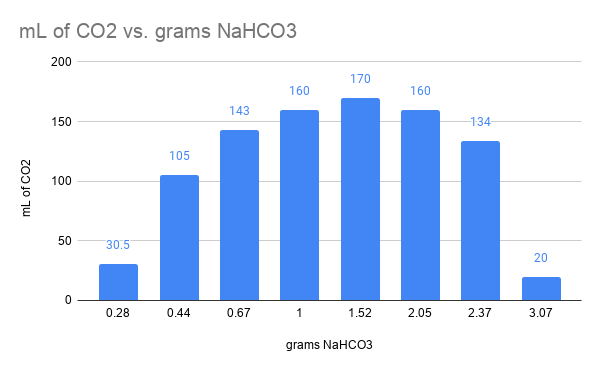 This graph is a very good example of experimental errors which may give rise to a pseudo-phenomenon i.e., an observation which apparently looks like a scientific phenomenon but it is an artifact of the experimental design.

First of all work out the moles of acetic acid (5% acetic acid) and moles of NaHCO3. As you can see vinegar has become a limiting agent. And it should have become a flat curve only if your system was a closed system.

So where is the culprit in the experimental design?

As you stated "It was about a 1-1.5 second delay between poring the vinegar and capping it."

By the time, someone puts a syringe, a large volume of gas has already escaped when acetic acid was poured on a heap of sodium bicarbonate. How big is the heap of 3 g NaHCO3!

There is a nice trick to avoid these problems. You put the sodium bicarbonate in an open plastic pouch so that acid does not immediately encounter the salt. You can stopper and then shake to mix (quite well).

So your hypothesis is right for a flat curve, sadly there is an experimental design issue.

Not the answer you're looking for? Browse other questions tagged solubility or ask your own question.