organic-chemistry resonance
share | improve this question | |
edited May 7 at 23:03

As OP suggested there are three resonance structures of diazomethane contributing to the structure: 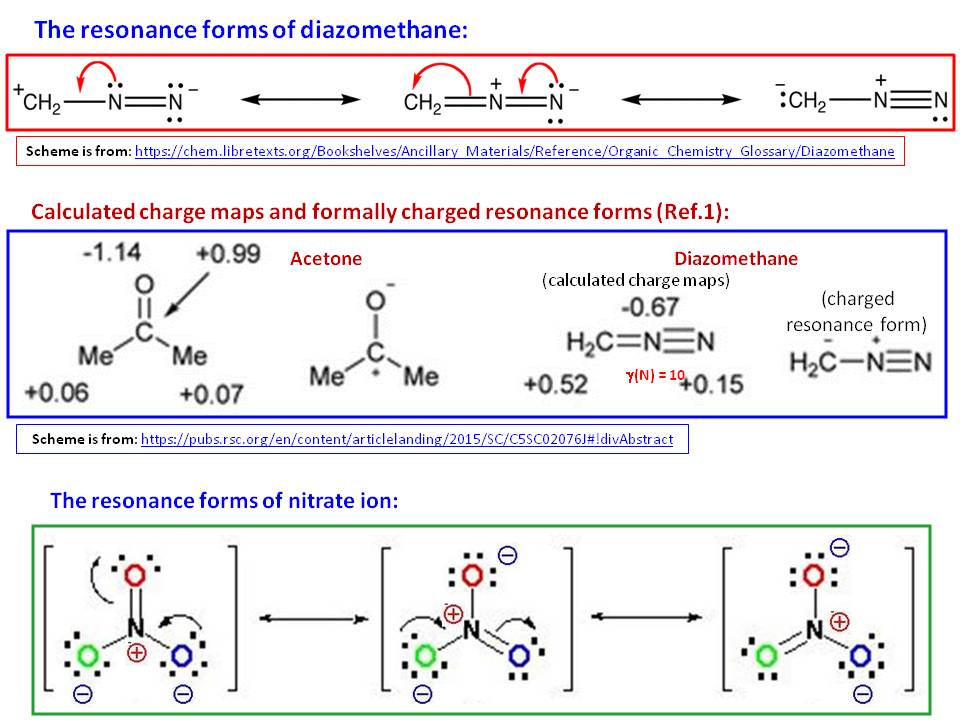 If you want to neutralize the formal charges of last resonance structure, you can put a double bond on negatively charged carbon and adjacent positively charged nitrogen to get the fourt resonance structure. However, traditionally we don't do that because it make the middle nitrogen hypervalent (or pentavalent nitrogen). On other word, it gave that nitrogen 10 valance electrons in its outer cell, which can't have in a 2nd row element.

In 2015, Durrant has published his work on quantum mechanical calculations, suggesting possibility of hyper valency in diazomethane and some other possible molecules (Ref.1). According to its abstract:

From the inception of Lewis' theory of chemical bonding, hypervalency has remained a point of difficulty that has not been fully resolved by the currently accepted qualitative definition of this term. Therefore, in this work, a quantitative measure of hypervalency has been developed. The only required input is the atomic charge map, which can be obtained from either quantum calculations or from experiment. Using this definition, it is found that well-known species such as $\ce{O3, \color{blue}{CH2N2}}$ and $\ce{ClO4−}$, are indeed hypervalent, whilst others such as $\ce{XeF4, PCl5}$ and $\ce{SO4^2−}$, are not. Quantitative analysis of known species of general formulae $\ce{XF_n^m−, XCl_n^m−}$, and $\ce{XO_n^m−}$ shows that there are no fundamental differences in chemical bonding for hypervalent and non-hypervalent species. Nevertheless, hypervalency is associated with chemical instability, as well as a high degree of covalent rather than ionic bonding. The implications for accepted Lewis structure conventions are discussed.

The experimentally determined atomic charges from electron densities obtained by X-ray crystallography have been compared with theoretical values obtained by QTAIM analysis of the output from quantum calculations. In order to calculate the overall electron count at the $\ce{X}$ atom, the author has defined a parameter called the valence electron equivalent, $\gamma$, as ‘the formal shared electron count at a given atom, obtained by any combination of valid ionic and covalent resonance forms that reproduces the observed charge distribution’. Mathematically:

According to the paper: