In acid/base chemistry, are there amphoteric substances that undergo something that resembles disproportionation in redox chemistry

My question is if there are substance that have the analogous acid/base behavior, where an intermediate protonation state yields the conjugate acid and the conjugate base. You could write it like this:

What I am looking for, however, is a case where the mixture of conjugate acid and the conjugate base (of the same amphoteric starting material) are the major species, i.e. a reaction of the type (1) with an equilibrium constant larger than 1. This would mean that the pKa values are in the opposite order than usual, i.e. it is "easier" to lose the second proton than it is to lose the first. For disproportionation, there is a similar feature of the reduction potentials (it is easier to accept the second electron than it is to accept the first).

Are there any such examples?

As I mentioned in the comments, I know of one case where a polyprotic acid has a second proton which is more acidic than the first: the aqueous pervanadyl complex, $\ce{[VO_2(H_2O)_4]^+}$. According to Wikipedia,

Though it certainly feels quite odd that $\mathrm{pK_{a_2}<pK_{a_1}}$, I suspect this feature is not absurdly uncommon in larger/more complex systems, where structural reorganisation upon deprotonation can be severe. Perhaps what makes the pervanadyl complex unusual is its comparative simplicity.

However, Wikipedia provides no source for those acidity constants. I looked around for an article discussing the speciation of vanadium ions in aqueous solution, and discovered this nice reference:

The relevant portion in this article is section 4.1. (Aqueous speciation chemistry of vanadium). The authors use thermodynamic data obtained elsewhere to establish the following equilibria:

As you can see, the first two constants are rather different from the values quoted on Wikipedia, and now they've become difficult to distinguish. However, clearly this is still an unusual case. They take these data and then calculate speciation curves to obtain the following graph: 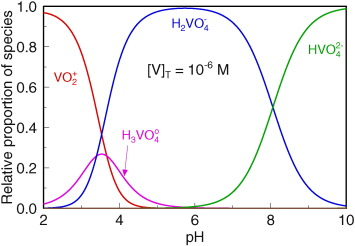 Evidently, the speciation curves don't really look anything out of the ordinary. It's likely this is partly due to the proximity of the values of $\mathrm{pK_{a_1}}$ and $\mathrm{pK_{a_2}}$ used, and also because the solution is highly dilute. It would be nice to know what happens in more concentrated solutions, but unfortunately we get something like this: 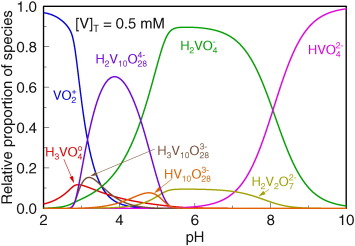 Like some other transition metals, vanadium has a tendency to oligomerise in solution, forming complex mixtures of polyoxometalates. Therefore, it's basically impossible to get a good visualisation of the effects of $\mathrm{pK_{a_2}<pK_{a_1}}$.

Fortunately, we can forget the chemistry and just study how the mathematics behaves. For simplicity, let's consider a diprotic acid $\ce{H2A}$, where we choose the values of $\mathrm{pK_{a_1}}$ and $\mathrm{pK_{a_2}}$. Also for simplicity, let us safely ignore the autodissociation of water by working with relatively concentrated solutions. Therefore, the mole fractions of the species $\ce{H2A}$, $\ce{HA-}$ and $\ce{A^2-}$ will be:

As you can see, there is no sudden catastrophe as the second proton becomes more acidic than the first. As the second ionisation becomes more favourable, it smoothly and continuously suppresses the formation of $\ce{HA-}$ . Something nice does happen at the crossover point, where $\mathrm{pK_{a_1} = pK_{a_2}}$, namely all species are present in the same concentration when $\mathrm{pH = pK}$. However, this not surprising if you look at the equations above.

For good measure, here are all the plots once again, now with a logarithmic y-axis. It's nice to see that even with the suppression of $\ce{HA-}$, it still exists as a trace in the background, and still behaves smoothly.

And to finish things off, now here are graphs showing the mole fraction of each unique species as $\mathrm{pK_{a_2}}$ varies from 10 to -6, in decrements of 1 unit of $\mathrm{pK}$. I rather like the subtle way the curves for the fully protonated and fully ionised species change, as the intermediate ion stops being a significant contributor in the equilibria.

Not the answer you're looking for? Browse other questions tagged acid-base redox or ask your own question.

7
Are there any amphoteric substances other than water and ammonia?
22
Comparing acidities of substituted and aromatic carboxylic acids
6
Why is the water reduction of oxygen favored in acidic conditions?
4
Stability of Sulfides - backbonding?
3
Is there a way to Determine if an Element can undergo Disproportionation?
0
Determining whether something is an acid, base, or amphoteric