Determining the torsion energy profile of butadiene by molecular dynamics

Disclaimer: this question is related to my previous question, although it is much more detailed

Consider the following rotation of butadiene: 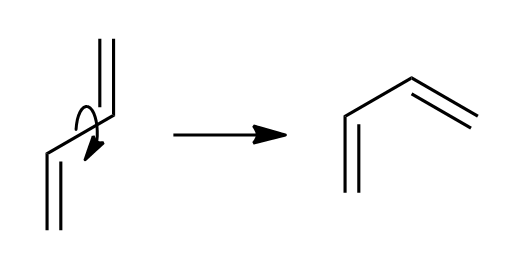 I want to determine the relative energy of each dihedral angle by molecular dynamics (MD).

Thus, I performed MD simulations in the NVT ensemble and recorded the dihedral angle periodically. With $N$ total dihedral angles, I made a histogram of the dihedral angles (e.g. a bin every 5 degrees). If we define the number of angles contained in a given bin as $n_i$, I am using the following equation:

This equation can be rearranged to isolate the approximate energy associated with that dihedral angle:

However, the curve obtained does not match the distribution I obtained by a simple relaxed scan of the dihedral: 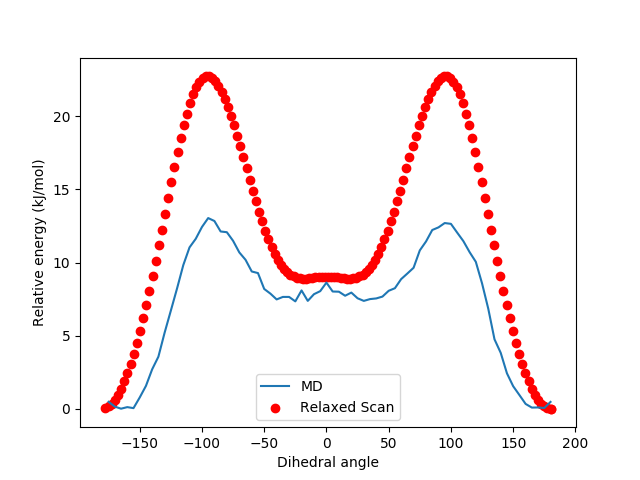 Where is the problem in my method?

I really only want to make a comment, but it is too long...

where $Z = \sum \exp ^{-E_i/RT}$ is the configurational partition function.

I can also accept that using a histogram, you could say $P_i = n_i/N$ where $n_i$ is number of samples in that bin, and N is total samples.

I do not see however how

Not the answer you're looking for? Browse other questions tagged computational-chemistry conformers molecular-dynamics statistical-mechanics or ask your own question.

0
How can the torsional barrier of a polymer determined by molecular dynamics?