Formation of Acetal from Hemiacetal?

In the reaction mechanism of formation of Acetal from Hemiacetal, why doesn't H+ attack the Oxygen of OR Group instead of the OH?

Since O in OR group has +I effect from two alkyl groups, shouldn't it donate its lp more easily?

organic-chemistry reaction-mechanism reaction-control
Share
Improve this question
asked May 2, 2020 at 7:07

The acetal reaction is performed in $\ce{H+/ROH}$ condition (e.g., $\ce{H+/CH3OH}$). The general mechanism can be found in any Organic Chemistry textbook. The reaction is reversible. The first step is protonation of aldehyde (or ketone) carbonyl oxygen by an acid ($\ce{H+}$): 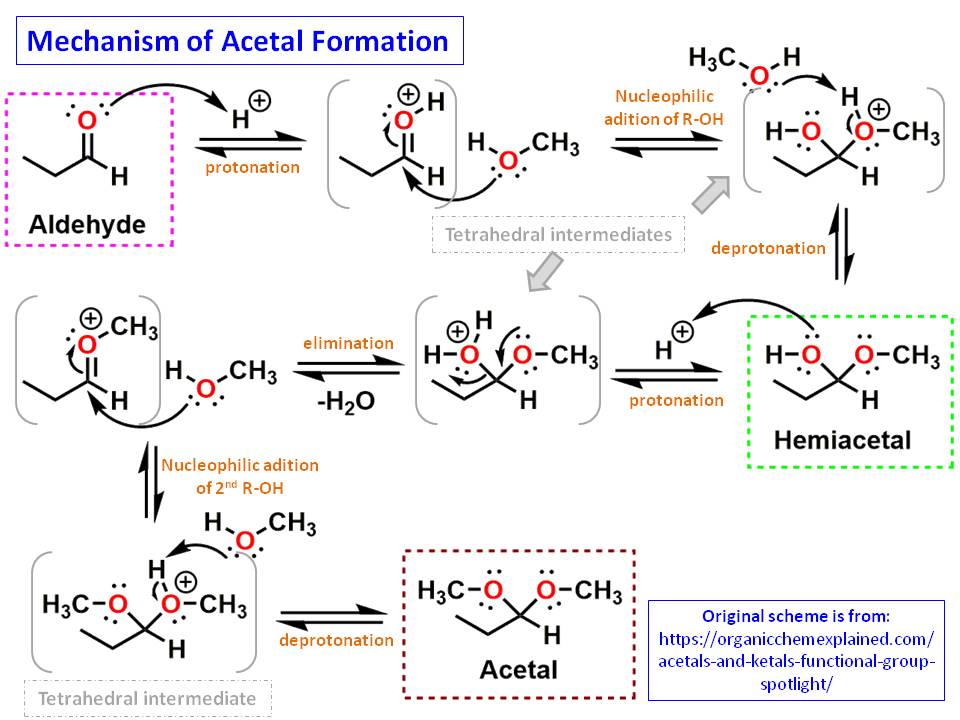 The protonation makes the carbonyl carbon more susceptible to nucleophilic attack by available alcohol (e.g., methanol in the scheme). This gives the tetrahedral protonated hemiactal intermediate, which undergoes deprotonation to give stable hemiacetal. All of these steps are reversible, but forward reaction is favored due to highly available alcohol molecules (Le Chatelier's Principle).

The hemiketal has two oxygen molecules, $\ce{OH}$ and $\ce{OR}$, both of which are susceptible to protonate. However, if $\ce{OR}$ is protonate, reaction would go backward. Of cause, it protonates because the reaction is reversible (see the scheme). Yet, more favored is $\ce{OH}$, which would subsequently eliminate as a $\ce{H2O}$ molecule. The resultant positively charged carbonyl compound undergoes second nucleophilic attack by another $\ce{CH3OH}$ molecule to give protonated acetal, which proceeds to give expected acetal by deprotonation. Since we are using the alcohol as the reaction solvent, forward reaction is favored by multiple times.

OP's suggestion of protonation of $\ce{OH}$ group is legitimate, but reaction goes backward for a moment, but forward reaction favorably proceed to the end (Recall Fischer esterification). If you want back your aldehyde (or ketone), you can make backward reaction favored by using water as your solvent ($\ce{H+/H2O}$).

Not the answer you're looking for? Browse other questions tagged organic-chemistry reaction-mechanism reaction-control or ask your own question.

3
Is this the correct mechanism of the formation of the nitronium (NO2+) ion from sodium nitrate and sulfuric acid?
5
Formation of azobenzene from nitrosobenzene and N-hydroxyaniline
2
acid-catalyzed ring opening of epoxide
2
Why does 1,2-dichloro-4-nitrobenzene undergo SNAr para and not meta to the nitro group?
2
Why pyranosides do not mutarotate?
0
Glycoside Formation Reaction
0
Acidity of alpha hydrogens in enolate formation