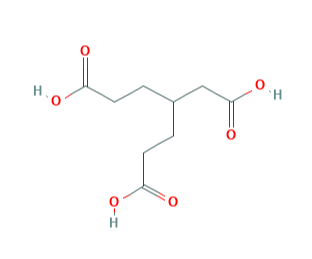 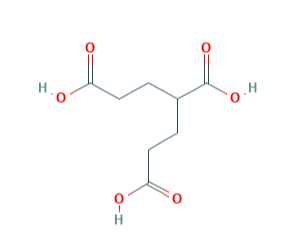 What is the rule for naming compounds with three carboxyl groups?

I have the two following coumpunds

They both have 7 carbon atoms in their parent chain, yet the second coumpunds is called a pentane. Also both have three carboxyl groups yet the first is a dioc acid. Also in the second one, its name is written as tricarboxylic acid. Why not trioic acid.

All these anomalies are confusing me. Can anybody explain why both are named so?

organic-chemistry nomenclature carbonyl-compounds
Share
Improve this question
asked May 2 '20 at 5:45

The relevant rules in the current version of Nomenclature of Organic Chemistry – IUPAC Recommendations and Preferred Names 2013 (Blue Book) read as follows.

P-65.1.2.1 Carboxylic acid groups, $\ce{{}-COOH}$, that conceptually replace a $\ce{{}-CH3}$ group of methane or terminate an unbranched hydrocarbon chain are named by replacing the final ‘e’ of the name of the corresponding hydrocarbon by the suffix ‘oic acid’. No locants are necessary to denote the positions of the carboxylic acid groups in a hydrocarbon chain; locants are used when hydrocarbon chains are modified by skeletal replacement, as shown in P-15.4.3.2.3. Except for formic acid, acetic acid, oxalic acid (see P-65.1.1.1), and oxamic acid (see P-65.1.1.1), systematically formed names are preferred IUPAC names; the names given in P-65 .1.1.2 are retained names for use in general nomenclature.

That’s why the name of the unsubstituted parent structure of the first compound that is given in the question is a heptanedioic acid.

P-65.1.2.2.1 If an unbranched chain is linked to more than two carboxy groups, all carboxy groups are named from the parent hydride by substitutive use of the suffix ‘carboxylic acid’, preceded by the appropriate numerical prefix ‘tri’, ‘tetra’ etc. and appropriate locants.

That’s why the name of the second compound is pentane-1,3,5-tricarboxylic acid. 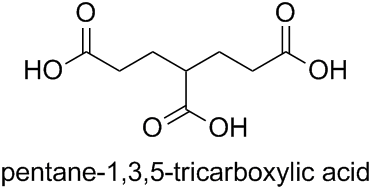 P-65.1.2.2.3 The prefixes ‘carboxy’ and ‘oxalo’
When another group is present that has priority for citation as suffix, for example, a free valence, or when all carboxylic acid groups cannot be described by a suffix, carboxylic acid groups, $\ce{{}-COOH}$, are indicated by the preferred prefix ‘carboxy’ (also used in general nomenclature). The prefix ‘oxalo’ is recommended as the preferred prefix for $\ce{{}-CO-COOR}$, but cannot be used to lengthen a carbon chain. In general nomenclature, the compound prefix ‘carboxycarbonyl’ may be used, but the compound prefix ‘carboxyformyl’ is not recommended.

That’s why the complete name of the first compound is 4-(carboxymethyl)heptanedioic acid. 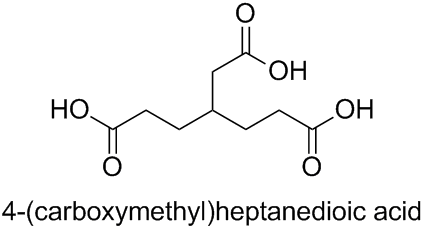 Not the answer you're looking for? Browse other questions tagged organic-chemistry nomenclature carbonyl-compounds or ask your own question.