This intriguing answer to Can reactions produce microwave or radio wave radiation? says (in part):

An ammonia maser qualifies as an inorganic RF-emitting reaction. As the nitrogen changes position in the $\ce{NH3}$ molecule, ~24 GHz radiation is emitted.

The first link is to The Ammonia Maser in Feynman's Lectures on Physics and it includes a picture of a triangular pyramid with the nitrogen pointing "up" in one case and "down" in the other as an illustration of the transition.

But how does it get there? Does it "tunnel through" the nitrogen triangle, or does the whole molecule flip around? Can we even ask that question? Could we, if for example we labeled the corners with $\ce{{}^{1}H}$ $\ce{{}^{2}H}$ and $\ce{{}^{3}H}$ as a gedankenexperiment to make the two distinguishable?

Let me expand a little on my earlier comment. If we only consider the inversion of the ammonia molecule (we ignore rotation and vibrations other than the inversion mode), the Schrödinger equation is given by $$ -\frac{\hbar^2}{2\mu_\text{red}}\frac{\text{d}^2\psi{z}}{\text{d}z^2}+V(z)\psi(z)=E\psi(z), $$ with $\mu_\text{red}$ the reduced mass and $z=d_\text{NH}\sin{\alpha}$, where $d_\text{NH}$ is the NH bond distance and $\alpha$ the so-called umbrella angle. The potential V(z) is shown in the link given by porphyrin in one of his comments. Although the reduced mass does, in principle, depend on $\alpha$ (see Eq. 4 of this paper), the dependance is weak and we may consider that the hydrogen atoms move simultaneously with respect to the nitrogen atom. In this case $$ \mu_\text{red}=\frac{3m_\text{H}m_\text{N}}{3m_\text{H}+m_\text{N}}\approx2.5\text{ u}. $$ The tunneling does not change the center of mass (c.o.m.) of the molecule, so while the nitrogen moves up, the plane of hydrogen atoms moves down to ensure the stationary c.o.m. (and vice versa). I made the following animated gif at some point during my PhD (sorry for the watermark, but I've had some negative experiences in the past):

The first paper - to my knowledge - that treats the tunneling of ammonia appeared already in 1932. The first application of QM tunneling was done by Gamow appeared 4 years prior to the ammonia work and solved the mystery of the huge range of observed lifetimes of alpha emitters (20 orders of magnitude).

In the 1932 paper, Dennison and Uhlenbeck also derive the magnitude of the tunneling splitting as a function of the reduced mass $$ E_\text{inv}=\frac{h\nu_0}{\pi}\exp\left \{-\frac{2\pi}{h}\int_\limits{-z_0}^{z_0}\left [2\mu_\text{red}\left (V(z)-E \right ) \right ]^{1/2} \right \}, $$ where $\pm z_0$ are the equilibrium positions corresponding to the potential minima, $\nu_0$ is the vibration frequency in one of the two wells and $E$ is the energy of the system with respect to the potential minimum. This expression is derived from the WKB approximation and it basically is the product of the tunneling probability with the frequency with which the reduced mass 'hits' the barrier. As can be seen from the formula, the tunneling frequency scales exponentially with the square root of the reduced mass, which is also observed experimentally. The following picture is taken from my thesis and basically a copy of Fig. 2 of this paper. 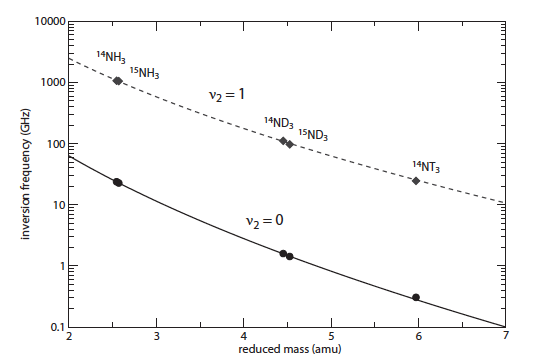 If the molecule would simple rotate instead of tunnel, the change in the energy splitting would be inversely proportional to the reduced mass (via the moment of inertia) and this is clearly not observed.

Not the answer you're looking for? Browse other questions tagged reaction-mechanism rearrangements or ask your own question.

13
Can reactions produce microwave or radio wave radiation?
5
Particle in a box with different barriers between two molecules
5
What is tetrasulfur like? Why is there so little experimental information about it?

8
Why does the Wurtz reaction form such an unstable compound with torsional strain?
2
Why does in the hydrolysis of acetylsalicylic acid with NaOH the solution has to be simmered gently?
3
In a nucleophilic substitution reaction, does the other atom to which the nucleophile is bonded matter?
11
What is the major product in the reaction of 2,3-dichlorobutane with sodium amide in liquid ammonia?
1
Why does hydroxide attack the carbon atom of methyl iodide (in an Sn2 reaction)?
15
On heating in the Earth's atmosphere, can magnesium react with nitrogen to form magnesium nitride?